Fab.com, the once high-flying eCommerce site, is reportedly in talks to sell to PCH International for $15M (and potentially as high as $50M). These outcomes would represent somewhere between 4.5% to 15% of the funding that Fab has taken on and 1.25% to 4.2% of the company’s last financing valuation.

No numbers have been confirmed, and there are rumors that the latest $165M investment could be moved to Fab spinoff, Hem, which would allow Fab investors a potential to still make a return on their initial investment. Of course, Hem could still turn out to be a big winner (think of Twitter which came from Odeo) or it might turn out to be one of the biggest startup failures of all time.

Below we’ve used CB Insights data and performance metrics to shed some light on the data behind Fab. We’ve chronicled it from its initial launch as a web-based community for gay men to an eCommerce site when it raised a series D round of funding at a $1B+ just 17 months ago. 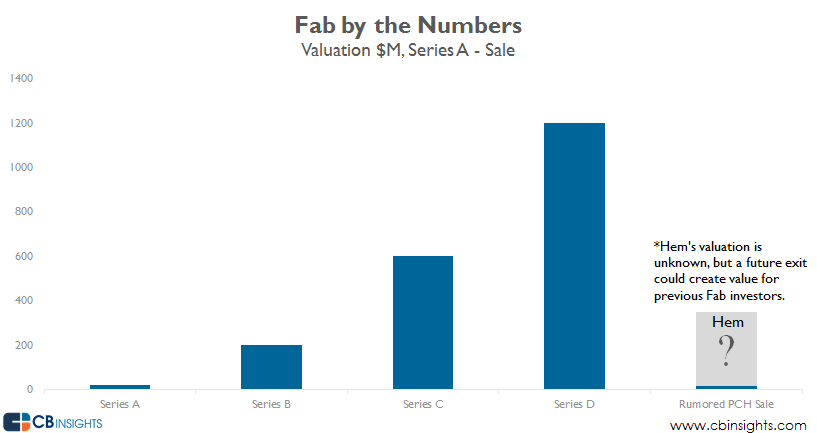 Web Traffic for Fab.com fell drastically in recent months. The site had a rank of 3,078 in January, peaked at 2,688 in May, all before cratering in October to a low of 8,337. While the traffic rank has rebounded slightly to 6,434, both Page Views Per User and Page Views Per Million have fallen to lows on the year as the Fab brand has been backburnered in favor of Hem.

In 2013, it was reported that one-third of Fab’s sales were being placed via mobile, and that they expected that mobile share to continue to grow. That hasn’t materialized as planned as the data also shows a downward trend in their mobile app ranking within the Lifestyle genre since December 2013, including a sharp drop off just after the holiday season. Fab’s genre rank over the past year peaked in December at 47 (and 379 overall) before consistently trending downwards to a low of 439 in early November, just down from its more recent ranking of 375. 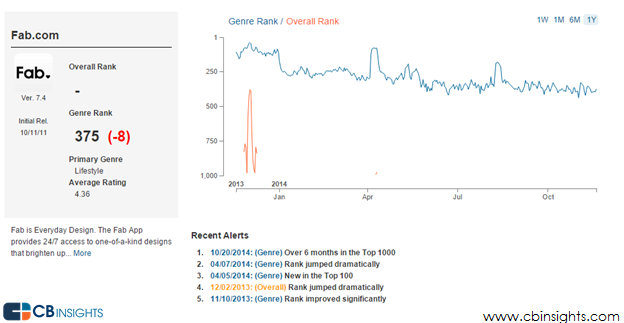 Want more data and performance metrics around some of tech’s most well-funded companies? Login to CB Insights or sign up for free below.