With several $1B+ acquisitions and multiple smaller deals across the globe, Expedia, TripAdvisor, Ctrip, and Priceline have focused on consolidating their positions while scouting for new growth areas in travel tech.

Four online travel agencies (OTAs) have played a big role in shaping the state of travel search and booking: Expedia, TripAdvisor, Ctrip, and The Priceline Group.

Today, TripAdvisor ranks first among OTAs in number of users, while Expedia, The Priceline Group, and China-based Ctrip lead the industry in gross bookings.

Struggling to secure their positions at the top, Expedia, TripAdvisor, Ctrip, and Priceline have been active in the private markets, with a combined 25 acquisitions and 10 startup investments in the travel tech space since 2013. These moves are aimed at consolidating market share, moving into new geographies, and expanding the travel giants’ service offerings.

Using the CB Insights Business Social Graph, we visualized where the four big OTAs — Expedia, TripAdvisor, Ctrip, and The Priceline Group — are placing their bets in travel tech. 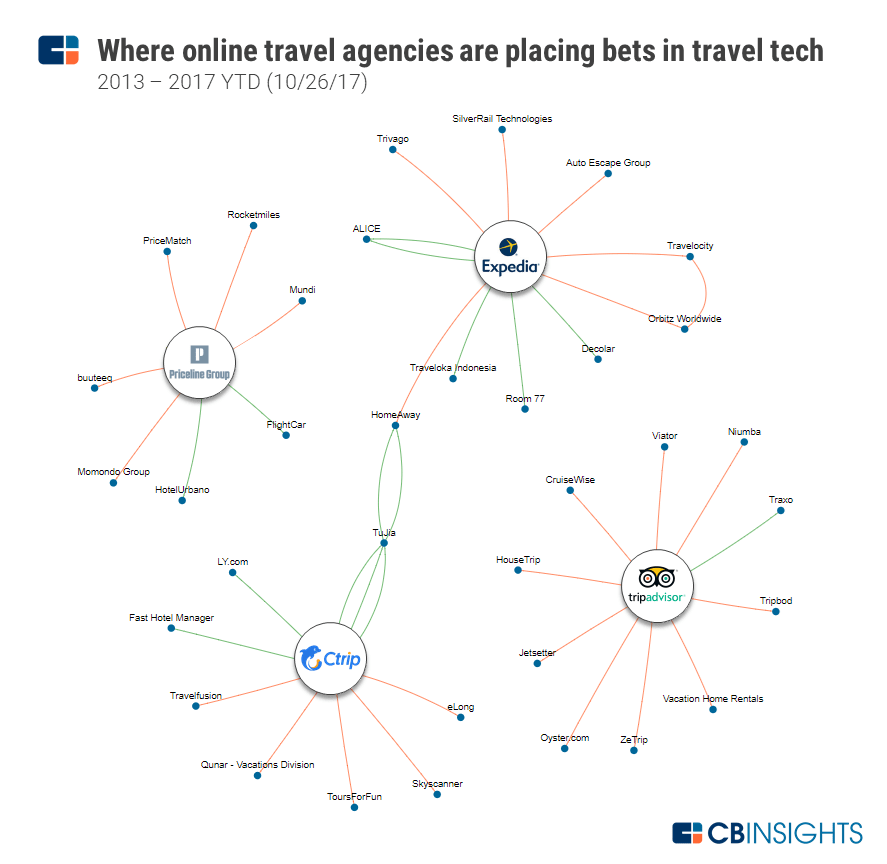 Expedia: The travel search and booking giant has made the group’s largest acquisition, spending $3.9B to acquire vacation home rental site HomeAway in 2015. Expedia has also made the largest investment, backing a $350M tranche of Series B funding to Indonesian travel unicorn Traveloka in Q3’17.

TripAdvisor: Spun out from Expedia in 2011 as a stand-alone reviews platform, TripAdvisor has used acquisitions to expand its offerings.

Beyond the travel tech industry, TripAdvisor has also made 10+ deals in the restaurant booking and reviewing space, mainly in Europe.

Ctrip: The largest Chinese OTA, Ctrip has placed bets on two of the most prominent Chinese travel tech startups. The company has repeatedly invested in vacation rental services provider TuJia ($764M raised, valued at $1.5B), and has also backed online leisure travel service provider LY.com, China’s most well-funded travel tech startup with $1.25B in disclosed funding.

Other deals have helped Ctrip expand beyond China, such as its $1.74B acquisition of London-based flight search engine Skyscanner in Q4’16.

The Priceline Group: The travel incumbent, whose brands include Priceline, Booking.com, and Kayak, has acquired 5 companies and invested in 2 more since 2013.

Notably, the company has consolidated its position among OTAs by acquiring competitors in searching and booking — including London-based Momondo Group and Brazil-based startups Mundi and HotelUrbano

However, The Priceline Group has also bet on a wider range of services, including hotel management platforms, by acquiring buuteeq and PriceMatch; loyalty programs, by acquiring Rocketmiles; and peer-to-peer car sharing, by investing in FlightCar.

As with competitor TripAdvisor, The Priceline Group has also entered the restaurant booking segment, spending $2.6B to acquire US-based OpenTable (not shown above) in 2014.