Top investors include LocalGlobe in the UK, High-Tech Grunderfonds in Germany, and SEED Capital in Denmark.

Europe is home to prominent startup and innovation hubs like Berlin, Stockholm and London, with more tech hubs, such as Zurich and Paris, on the horizon.

Using CB Insights data, we mapped the top venture capital investors in Europe by country, based on number of portfolio companies the investor had backed.

Specifically, we analyzed the most active VC investors 2012 – 2017 YTD (08/30/2017), including VCs, corporate VCs, growth equity firms, and super angels. We limited our search to firms with at least one investment since Q1’16 and more than one portfolio company in the country where they were the top investor.

Using these criteria for selection, some countries did not make the map, including Hungary, Ukraine, and Croatia, among others. The country with the fewest VC investments in our infographic is Slovakia, which saw just two venture rounds to two companies. Neulogy Ventures participated in both deals.

Additionally, in nearly every country on our map the top investor into that country was locally headquartered. The two exceptions are: Imprimatur Capital in Latvia and SingulariTeam in Cyprus.

At the top of the list, High-Tech Grunderfonds has made nearly 200 deals to 150+ German companies since 2012, making it the top investor in European tech VC by a long shot. Notable recent deals include a $3.4M seed round to POSpulse, a shopper intelligence platform, and participation in a $2M seed round to MoBerries, an HR and workforce management company. Since 2012, German tech companies have seen more than 1,600 deals worth over $10B.

The UK has seen the highest number of deals and total funding deployed to tech companies, at more than 3,200 deals worth nearly $20B since 2012. VC investor LocalGlobe participated in approximately 60 rounds to 50+ UK companies over the same period, making it the most active investor in the UK. Recent investment include three rounds to fintech upstarts: a $2.6M Series A to Cleo AI, a $1.6M seed round to Zego, and a $14M Series A to Tide.

Check out the map and full list of top investors below. 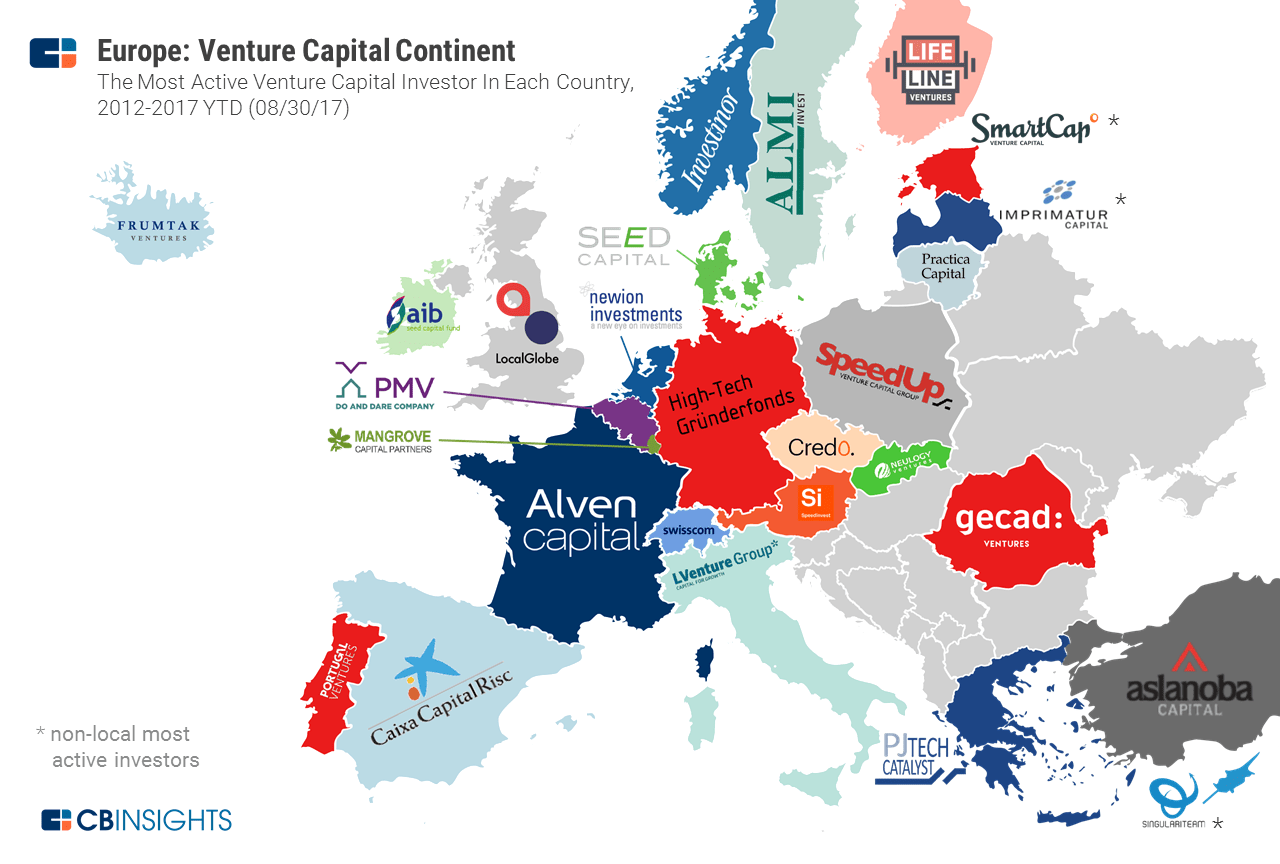