Total revenue of the esports industry is currently estimated at $1.1B and is expected to reach $1.5B by 2020. Record high viewership continues to attract world renowned brands, advertisers, and franchise owners.

Though competitive gaming dates back decades — as early as the Spacewar video game tournament held at Stanford University in 1972 — esports have now become a global phenomenon.

With the rise of affordable high-speed internet and powerful computers, as well as globally popular games, video gaming is fast becoming a competitive sport, and a spectator draw.

We define esports as competitive gaming that is facilitated by electronic systems, in particular, video games played on computers or consoles by professional gamers (though many do it as a hobby or pastime).

For context, we used CB Insights’ Trends Tool and mapped out a timeline of key events that have shaped the esports industry. These include the growing involvement of traditional sports leagues and broadcasters, as well as the incursion of artificially intelligent systems as players. 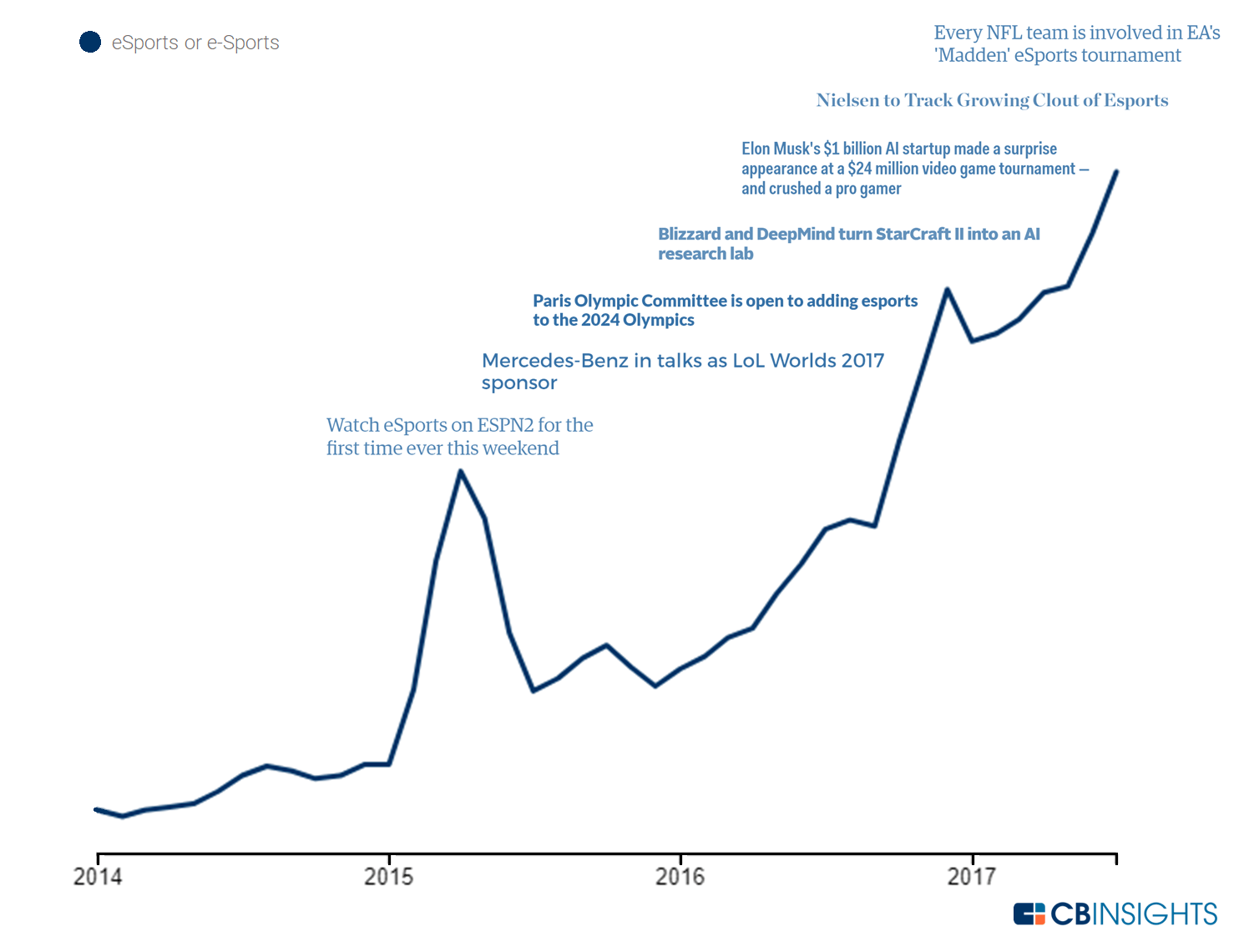 In this report, we dig into the esports industry and how it compares to the traditional sports landscape:

Winnings
To provide an appropriate comparison, we’ve looked at the largest payouts from golf and tennis tournaments in 2016. While esports are typically team structured, players earn individual shares of event winnings.

Already, esports players are taking in purses that compare favorably with those of other professional sports. While Stan Wawrinka won an impressive $3.5M for his win at the US Open (tennis), each individual of the Wings Gaming team earned approximately $1.83M for their win at The International (esports tournament), slightly more than Dustin Johnson’s earnings from the US Open (golf). 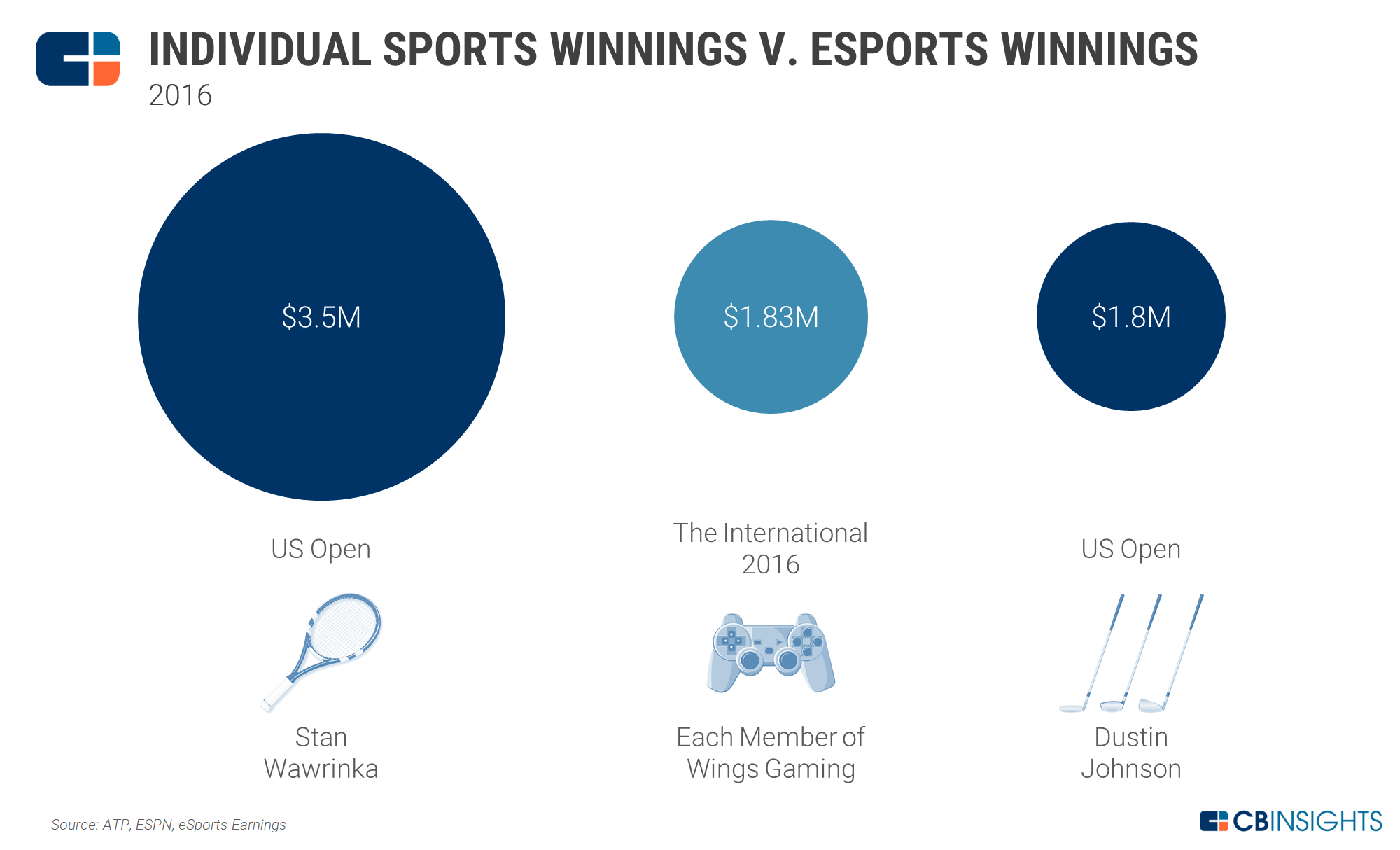 Audience
When comparing the audience of esports events like The International (Dota 2) to major sporting events in the US, esports also compare favorably. Media measurement company Nielsen recently announced the launch of a new vertical dedicated to the analysis and valuation of the esports industry.

Esports continue to attract larger television audiences year after year, which is not necessarily the case for traditional sporting events. 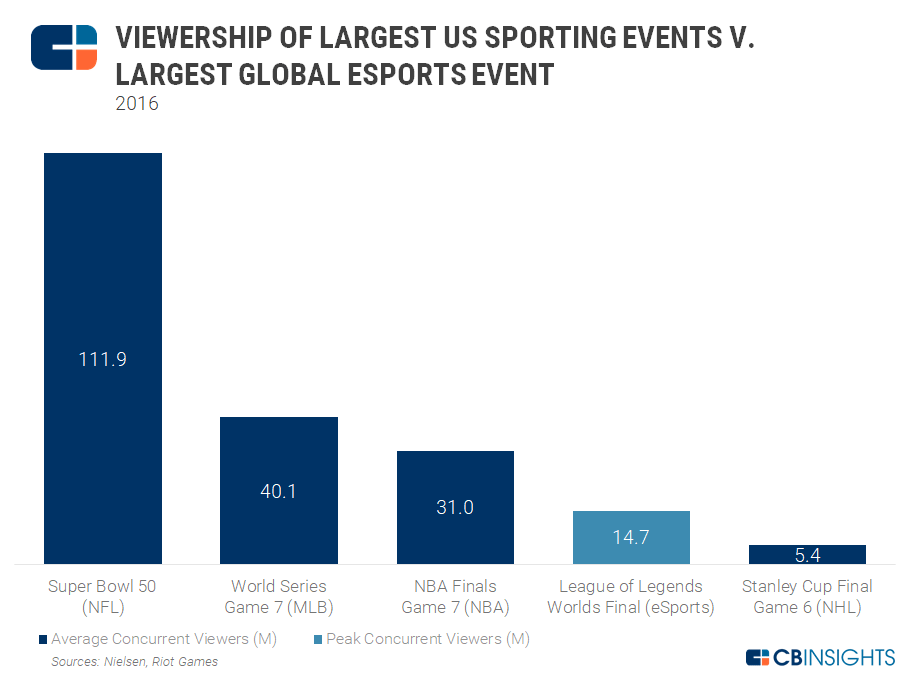 In looking at 2016, the League of Legends World Championship drew 14.7M peak concurrent viewers (i.e. largest number of viewers at the same time) during the final matches, up 5% year-over-year. It drew 43M total unique viewers over the 30-day event, which was up 19% year-over-year.

Revenue
Traditional US sports leagues also generate revenue that match or exceed some of the world’s largest corporations. In this column, esports does not yet measure up to traditional sports. However, when comparing esports revenue to other US sports revenue, it’s important to recognize just how young the esports industry is. On average, the most popular American sports leagues are more than 100 years old. Esports, on the other hand, were first covered by ESPN less than 5 years ago. But despite their youth, esports are currently estimated to generate between $500M and $1.1B in revenue worldwide and are expected to reach to $1.5B in total global revenue by 2020.

By comparison, the NFL earns approximately $13B in revenue but was founded in 1920. 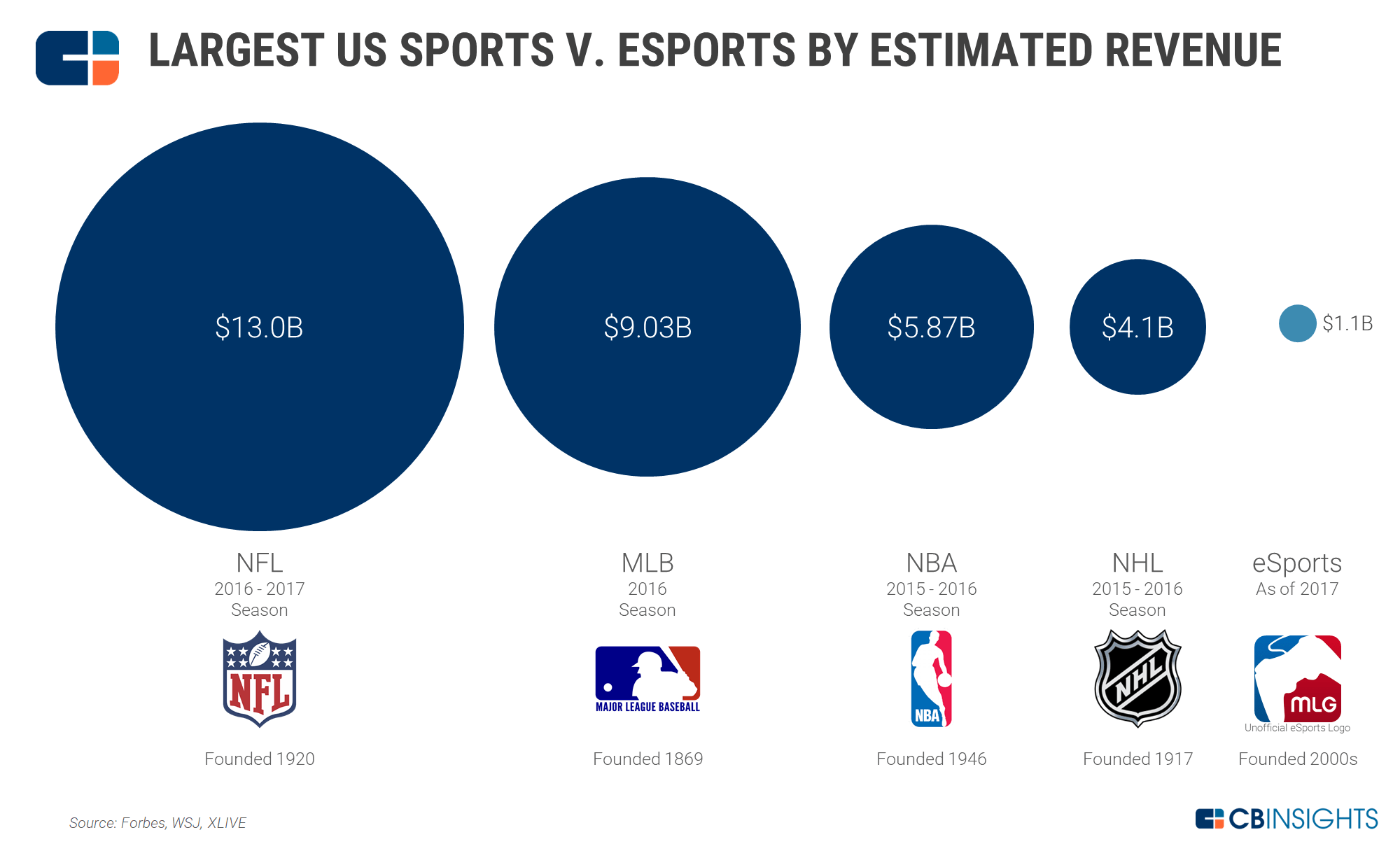 As the esports industry has grown, structure and transparency have formed. This has encouraged a number of the world’s largest brands and advertisers to partner with the most promising esports leagues and tournaments. According to Nielsen, sponsorships currently range from $75K to $17M. Collectively, sponsorships make up the largest revenue stream for esports and are estimated to grow to $655M by 2020. Advertising is also expected to make up a significant portion of revenue and is slated to grow to $224M in revenue by 2020. And the fastest growing segment of all, media rights, are expected to reach $340M by 2020, according to estimates by Newzoo.

This global “sport,” with all its promise, has grabbed the attention of many involved with other professional sports organizations. Recently, there have been a number of team purchases by notable NFL, MLB, and NBA players and owners. Some, like LA Rams guard Rodger Saffold, became involved partly due to their being gaming fans.

Below is a non-comprehensive list of notable esports owners/affiliates and their respective teams/organizations:

Certain individuals on our list are co-owners of organizations, others own or have a majority stake in the parent company that directly owns the franchise. Certain athletes on our list finished their careers in minor leagues, which we did not highlight.

Teams operating under some of these notable owners are earning impressive returns. To date, Team Liquid, an organization that manages a few different teams playing across games such as Dota 2, League of Legends, Counter-Strike, Star-Craft II, and others, has collectively earned about $16.9M in winnings. The majority of these winnings were earned from The International 2017 (Dota 2).

Below is a list of the top 10 esports teams by issued winnings:

Many of these teams have large rosters that compete across a variety of games. Team Liquid, for example, has over 30 gamers competing across 12 games. However, the 5 individuals playing on the Dota 2 team are the highest earners on Team Liquid. The entire Dota 2 team for Team Liquid are among the top 10 esports earners due to their recent win at The International 2017. 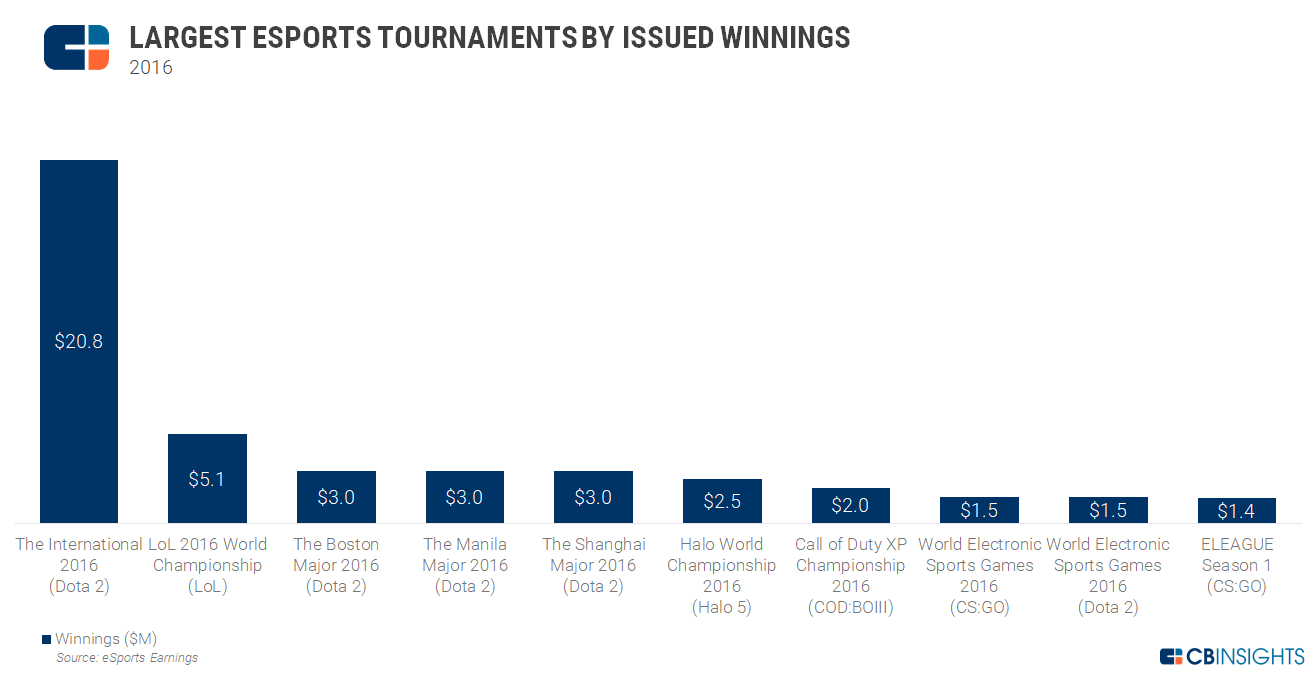 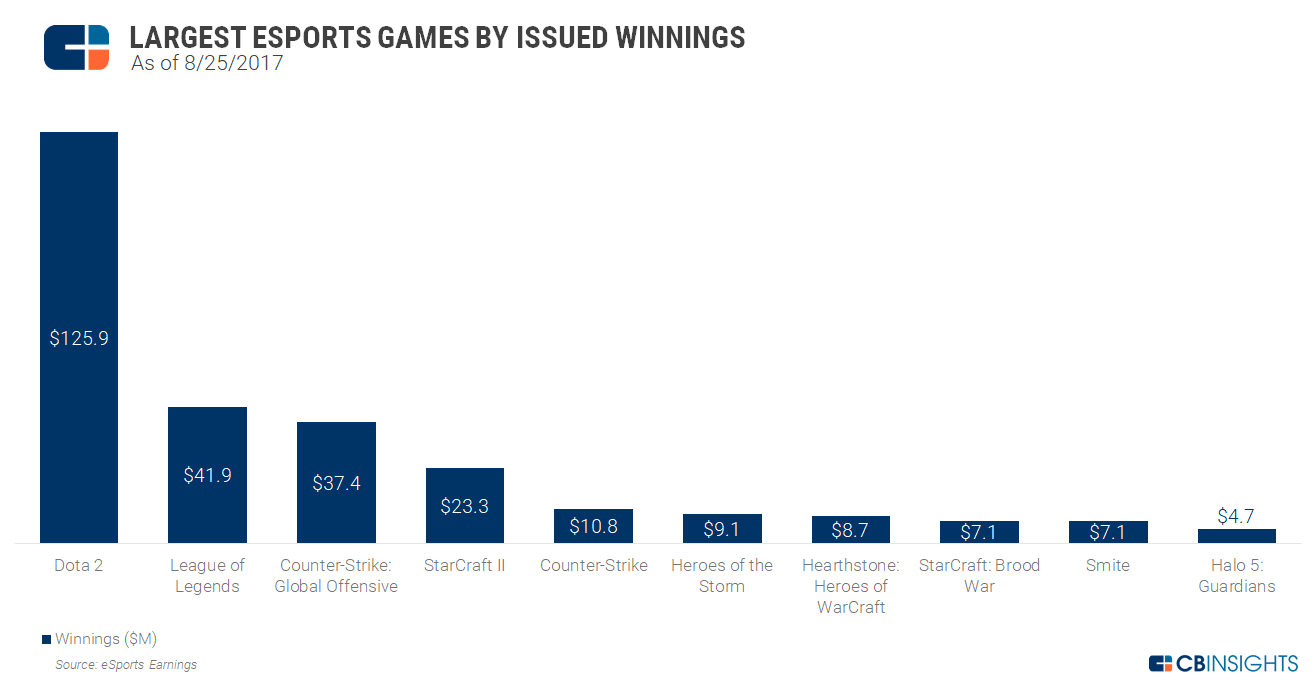 We also see that the games issuing a majority of the winnings are also the games played most by esports competitors. Counter-Strike: Global Offensive, League of Legends, and Dota 2 are three of the most played games in the esports community. However, while Dota 2 and League of Legends issue more in total winnings, over 40% of competitive esports players are playing one of the two Counter-Strike games (Valve Corporation). Counter-Strike: Global Offensive alone boasts over 30% of global competitive players. While League of Legends (Riot Games) hosts an impressive 4803 global esports players, Dota 2 (Valve Corporation) only hosts a modest 1980.

Esports players have more in common with traditional professional athletes than meets the eye. The majority of these players, especially the high earners, are young. To date, 22-year-olds have earned $28.5M in total winnings throughout the history of esports, more than any other age bracket. 20-year-olds, however, happen to have the most esports players at 1,497. The youngest player to earn money is 10, while the oldest is 44. However, the primary earning years for esports players range from 16 to 29 years old — similar to many traditional sports. 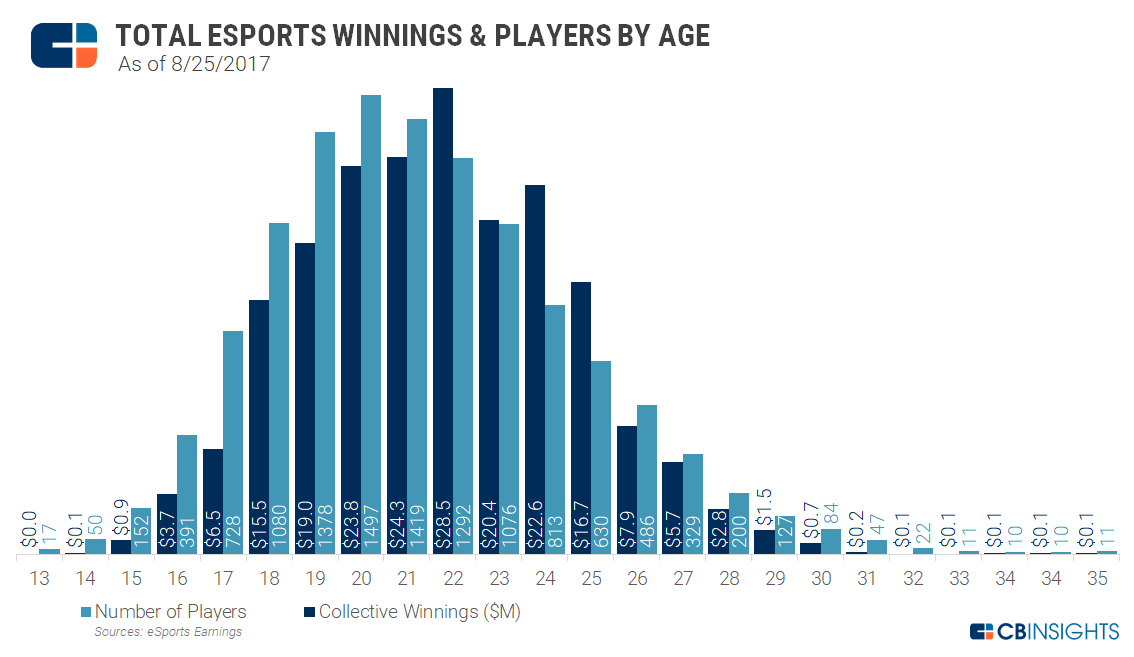 There are a diversity of nationalities represented in esports. Today, over 120 countries participate, with 8 different countries found in the top 10 esports earners list alone. And over 29 countries that have earned at least 0.5% of global issued winnings. The most high-earning player to date, Kuro “KuroKy” Takhasomi, is a German native. 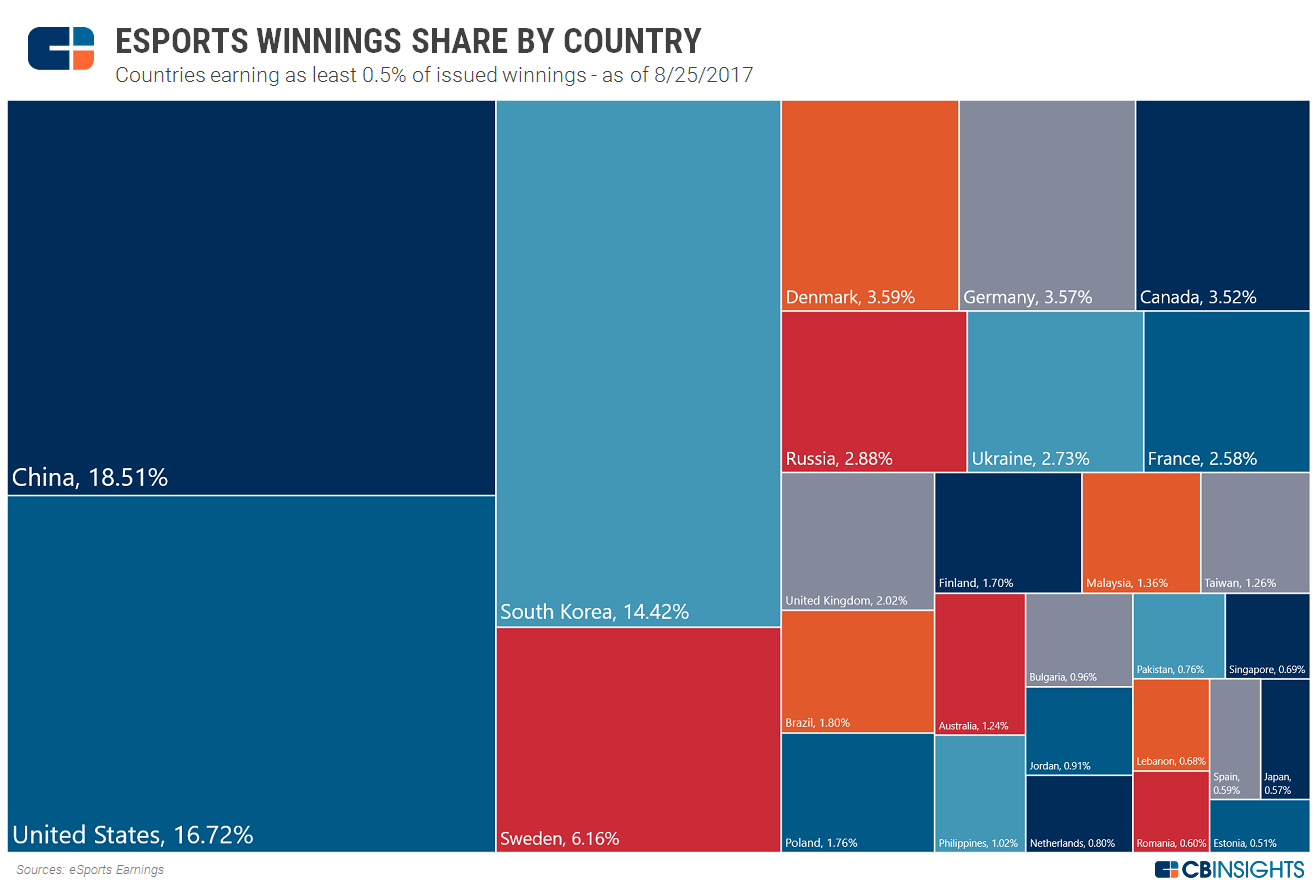