More than half of e-sports and game-streaming deals have come since Amazon's acquisition of Twitch in September 2014.

Amazon’s acquisition of Twitch last fall for $970M put a spotlight on the growing role of game streaming and e-sports in the media and entertainment realm. Twitch seemed to come out of nowhere and by the end of last year had 100 million users on its game-streaming platform. Investors are now placing bets in pursuit of the next big breakout gaming service.

E-Sports and game-streaming startups have raised just over $295M since the start of 2010, according to CB Insights data. But 56% of the deals have come since September 2014, which is when Twitch was acquired. Deal activity hit a record quarterly high in Q2’15, as the chart below highlights: 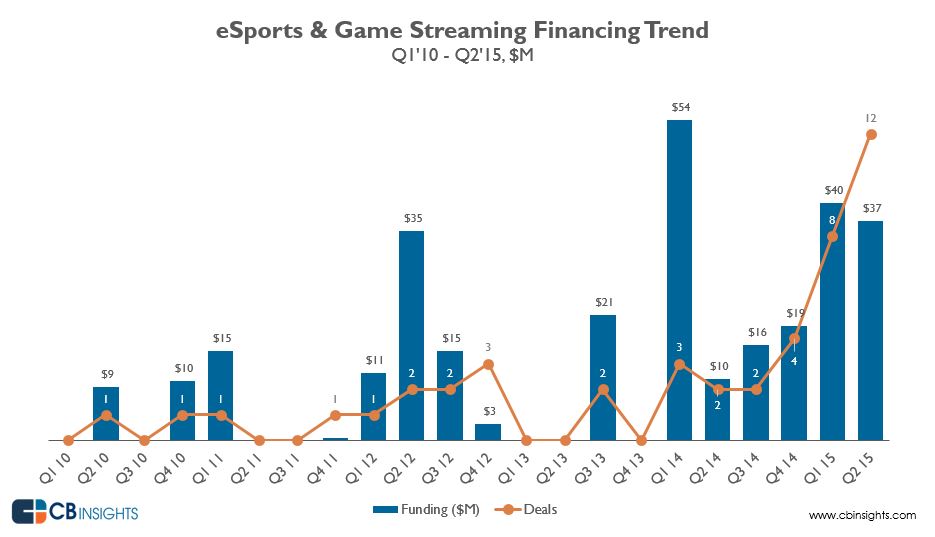 The primary trend driving growth is the rise of competitive gaming, or “e-sports,” a market that on its own is generating over $600M in revenue globally from sponsorships, merchandise sales, and event tickets.

Among the most notable deals in e-sports and game-streaming since 2014 include a $12M Series A to fantasy league platform Vulcun, which raised from Sequoia Capital, Battery Ventures, and Universal Music Group. Raptr, a PC gaming video-capture service, raised a $14M round led by Accel Partners in March.

Below are 10 of the most well-funded companies within the universe of e-sports and game-streaming. Most of the prominent deals in 2015 have gone to fantasy sports league betting sites including AlphaDraft, Unikrn and Vulcun. But financing has also gone to startups specializing in video game-coaching tools and streaming mobile e-sports.

Looking for more gaming financing and exit data? Sign up for the CB Insights Venture Capital Database free below.