Research Brief
1713
Analyzing the equity stakes that investors are taking in $1B+ valuation tech rounds globally.

Note: When reported, valuations can be either pre-money or post-money. Because this is often not specified, we did this analysis for both scenarios. This also does not take into account liquidation preferences and other terms that could affect investor return, or ownership percentages at exit if not all shares are converted to common stock.

While the number of startups valued at $1B+ continues to increase, so does the amount of equity that these companies are giving to investors.

Lyft’s financing was actually the 8th most dilutive $1B valuation tech round since 2010. Delivery Hero’s Series G was the most dilutive of all $1B+ valuation rounds to VC-backed tech companies, when they raised $350M at a $1B valuation from return backers Insight Venture Partners and Kite Ventures, in addition to Vostok Nafta. The Series G was one of three rounds of financing for the German food-delivery company raising a total of $523M in 2014 as they buoyed Germany’s billion-dollar tech scene.

When looking at the average dilution trend of $1B+ valuation tech rounds to vc-backed companies, we found that the average dilution has increased for three straight years, to a high of 9.2% or 10.5% depending on pre/post-money in 2014. Notably 6 of the 10 most dilutive rounds (seen above) took place in 2014. Whether this is driven by companies valuing the “prestige” that comes along with having a $1B+ valuation and a willingness to take more dilution to reach that valuation or investors becoming more cautious is unknown. 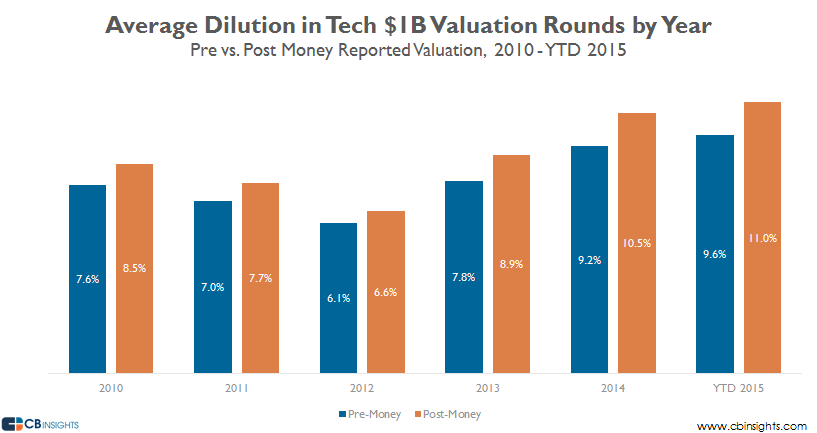 The other discernible trend that CB Insights data reveals is that international tech companies raising $1B+ valuation rounds typically give up more equity than their US counterparts. The graph below shows that of all $1B+ valuation rounds since 2010, the US companies gave up equity stakes of 7.7% and 8.6% on a pre and post-money basis, versus international companies which saw significantly higher figures of 9.7% and 11.2%. This is likely driven by the larger supply of capital available in the US vs other markets. 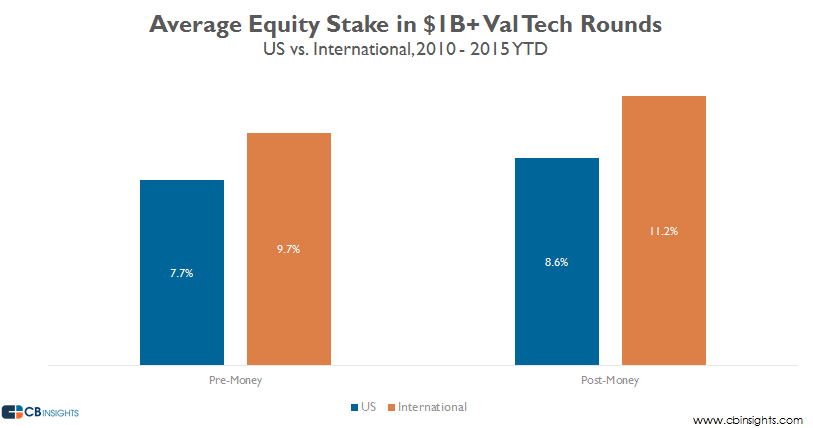 Want more financing and valuation data around $1B+ tech companies? Login to CB Insights or sign up for free below.