Research Brief
1836
This year started slow, but Tesla's launch of the Powerwall home battery this summer could reignite interest in the industry.

Energy storage is one of the biggest bottlenecks to innovation in electronics and renewable energy, with current batteries unable to hold and extract electricity effectively. As Tesla introduces its Powerwall home battery this summer and readies its lithium-ion battery Gigafactory, we decided to take a look at the funding trends in the energy-storage space since 2010.

Investment has been uneven. Energy storage saw a peak in 2011, when $876M was deployed across 59 deals. There were five $50M+ deals that year, including a $125M Series F round to Boston-Power and $73.5M in financing to fuel-cell developer ClearEdge Power (which was later acquired by Doosan Corporation in mid-2014). However, this peak was followed by two years of straight decline in 2012 and 2013, with a combined total of $474M invested over both years. The pace picked up again in 2014, with a 49% YoY increase in deals and a 90% YoY increase in funding. Though Q1’15 has started slow, Tesla has put a spotlight on the industry and we may see more dollars enter the sector. 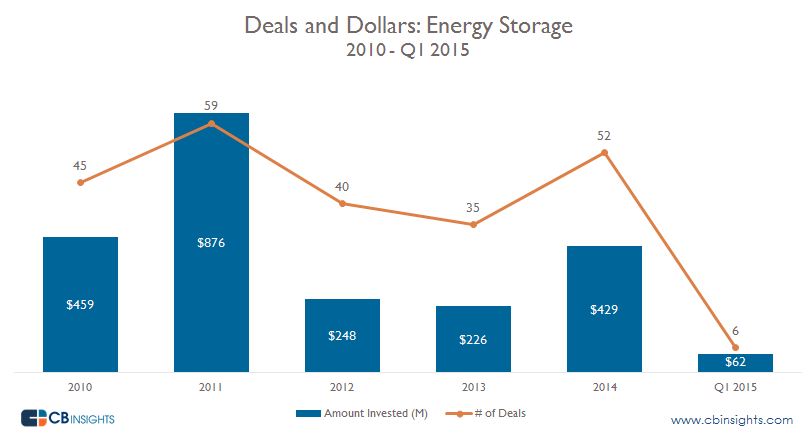 Energy-storage deals are focused on the earlier stages, with more than half happening in the the Seed/Angel or Series A rounds. Nearly a quarter of all deals happened at Series A, including investments in Infinite Power, Fluidic, and General Compression. Late-stage deals were the least popular, taking a cumulative 15% of deal share since 2010. 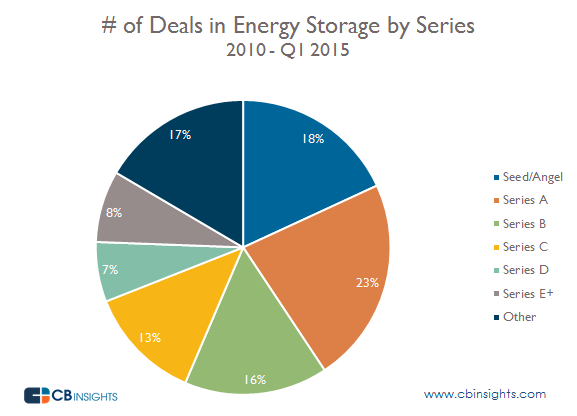 In terms of investment dollars, mid-stage deals took the lion’s share. Series C had the largest dollar share, taking nearly a quarter of all dollars since 2010. Notable Series C deals include rounds to Atieva and Lilliputian Systems, the latter being a portable fuel-cell company that eventually shut down. Series B and E+ deals each took a 21% share of dollars invested in energy-storage companies. 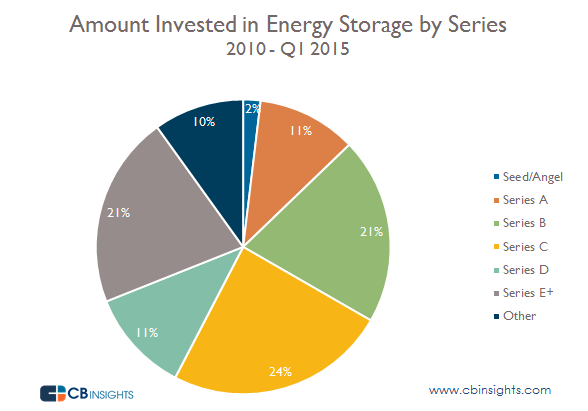 Boston-Power tops the list of the most well-funded energy-storage companies, with more than $340M raised. Atieva and Aquion Energy follow, both raising more than $100M each in total. UK-based Nexeon, the only international startup on the most-well funded list, has raised more than $75M from investors, including PUK Ventures and Imperial Innovations.