After startup failures earlier in the decade, 2016 saw fresh highs in deals and dollars to companies working on vehicle electrification.

The electric vehicle (EV) revolution has rolled along in fits and starts, with relative startup success stories like Tesla balanced by a spate of high-profile bankruptcies and a crude oil glut. However, with global regulations tightening and the explosion of interest in autonomous vehicles driving interest in the space, investors are again looking to private markets for EV opportunities.

We define this category as the tech ecosystem enabling road-going electric vehicles (e.g. mopeds, vehicles, buses), from startups working on powertrain components to EV charging infrastructure and newcomer OEMs looking to compete directly with incumbent automakers. We also include tech companies facilitating access to EVs through dedicated electric ride- or car-sharing networks. General battery and grid tech companies are excluded unless they place a heavy emphasis on serving the EV market.

A number of much-hyped companies raised hundreds of millions (if not billions) of dollars in investor and government funding from the late 2000s into the early 2010s, only to quickly flame out. EV maker Fisker (now Karma Automotive) and its battery supplier A123 both went bankrupt from 2012-13 and were eventually purchased by Chinese auto supplier Wanxiang Group. EV charging and infrastructure company Better Place was also sold in bankruptcy for just $450k after reaching a peak valuation of over $2B. 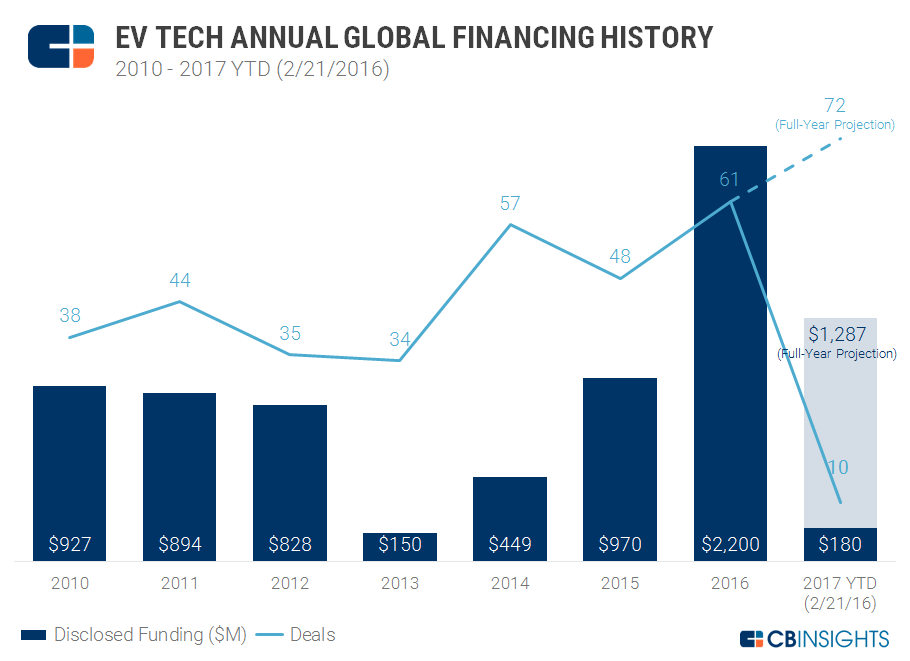 Given this context, we extended our funding analysis window back to 2010 to capture the dramatic plunge in private markets activity through 2013 and 2014. However, VC and corporate investment has roared back since, with 2016 setting highs for the decade in both deal terms and funding. Major automakers are now making concerted efforts to counter Elon Musk’s Tesla and develop their own electric vehicle sub-brands as EV economics and cost structures improve. EVs are also a natural complement to ongoing mobility developments in automation and ride-/car-sharing.

2016’s $2B+ annual funding figure, which topped $1B for the first time this decade, was been driven by mega-rounds to newcomer OEMs seeking to follow Tesla in developing their own electric vehicles from the ground up. Chinese and Chinese-backed companies abound, with WM Motor ($1B investment in August) and NextEV (NIO) joining Future Mobility, Faraday Future, and Lucid Motors (formerly Atieva).

Many of these EV companies are also targeting the “full stack” of next-generation mobility technologies, seeking to develop not just the vehicles themselves but also the automated driving technology to pilot them. Zoox, a stealthy California-based startup, is one well-known example, having disclosed at least $250M in 2016 funding across two rounds.

With Tesla proving to be the exception rather than the rule thus far in this capital-intensive space, it remains to be seen how many from this new wave of companies will succeed. However, investors also backed a healthy variety of other startups last year, such as electric bus maker Proterra ($70M Series B), charging network and app ChargePoint ($50M Series F), and wireless charging tech developer Evatran ($12.3M across two rounds).

2017’s deal activity has been strong thus far, on pace to top 2016’s high. Barring any mega-rounds later in the year, funding will come in below last year’s figure at the current run-rate (though it will still top $1B).

The EV startup seed market is also seeing healthy signs and after shrinking to less than a quarter of all annual deals in both 2013 and 2014. Seed deal share has grown for two consecutive years, reaching a high of 30% in full-year 2016. The sizeable portion of “Other” deals is largely driven by corporate minority stakes and undisclosed rounds. 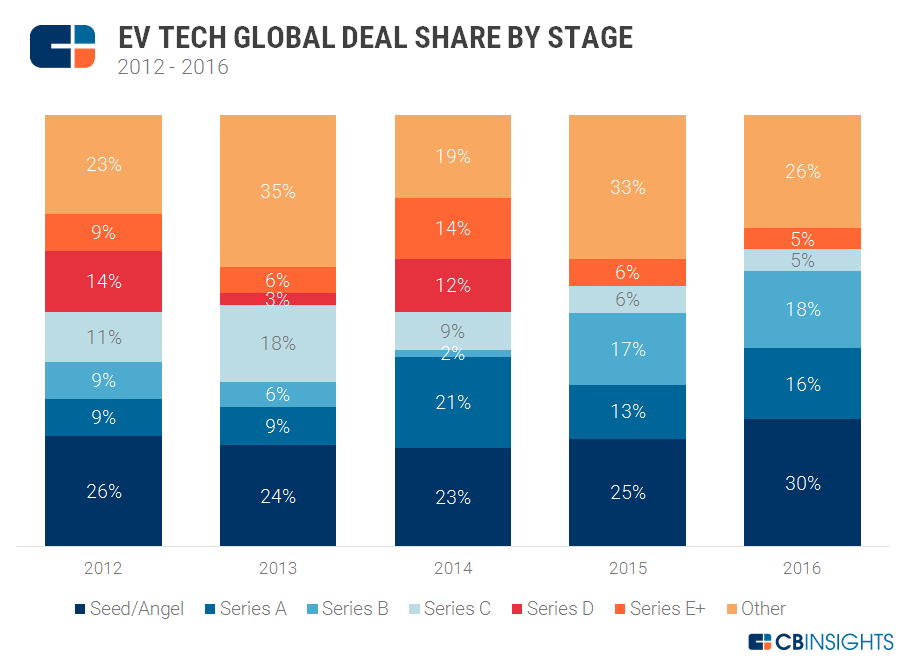 Our Trends tool also highlights the resurgence in electric vehicle interest, underscoring that media attention and hype around EV startups is once again on the upswing, even as established automakers shift more engineering resources and new sub-brands towards the field. 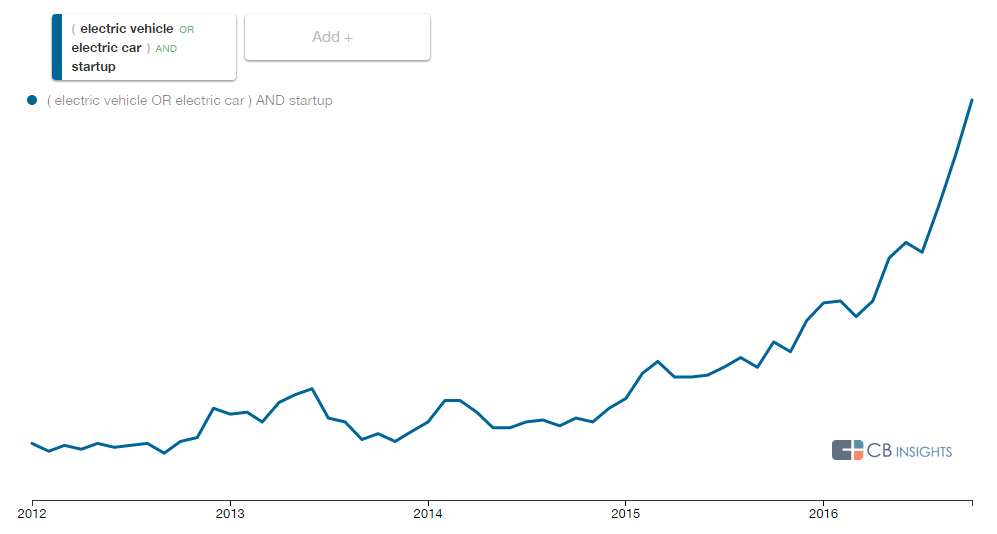