Research Brief
2673
Ed tech M&A peaked in 2014, and this year has seen less than a half-dozen exits to-date. There have only been 5 VC-backed IPOs in the category since 2012.

Exits for VC-backed ed tech startups decreased slightly in 2015, even as funding to the industry skyrocketed in that year.

This year, coinciding with a chill in funding and deals, exits have slowed further, with just five acquisitions of VC-backed ed tech companies in the first 136 days of 2016.

IPOs have also been thin on the ground in the last five years. Ed tech has seen just four venture capital-funded IPOs since 2012.

That said, ed tech has seem some prominent exits, including the $1.5B acquisition of Lynda.com by LinkedIn, and Instructure’s late-2015 IPO.

As mentioned, exits have slowed so far this year, with just 5 M&A exits through 5/16/16, though the acquirers include a diverse set of education, tech, financial, and media companies, including India-based physical education and career-counseling company FitKids, which acquired robotics education company ThinkLABS; and Apple, which acquired US student data-analytics platform LearnSprout.

2015 saw the same number of acquisitions as the previous year (24), while IPOs ticked down to just one — the November 2015 IPO of Instructure, a Salt Lake City-based company that offers both a cloud-based learning management system (Canvas) and a MOOC (Canvas Network).

Ed tech startup exits peaked in 2014, with 24 M&A deals and two IPOs – RareJob, an English-learning site based in Japan, and 2U, which helps universities develop and deploy online learning platforms. Based in Maryland, 2U had raised $107M in disclosed funding prior to IPO, from investors including Bessemer Venture Partners, Redpoint Ventures, and Highland Capital.

In 2013, digital-learning platform Chegg, which had raised over $187M, went public in November. 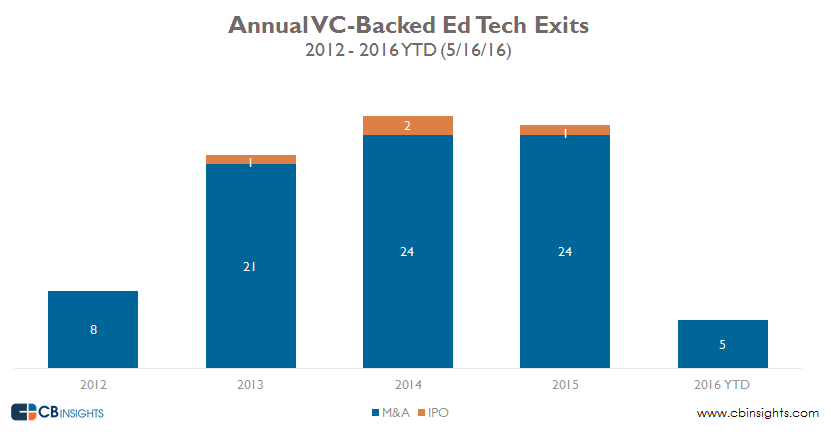 Zooming in on quarterly trends, we see that Q2’14 was the largest quarter for VC-backed ed tech exits, with 12 M&As and one IPO. Q1’16 has had the fewest exits since Q4’14. Overall, the industry averaged five exits of VC-backed companies per quarter since 2012. 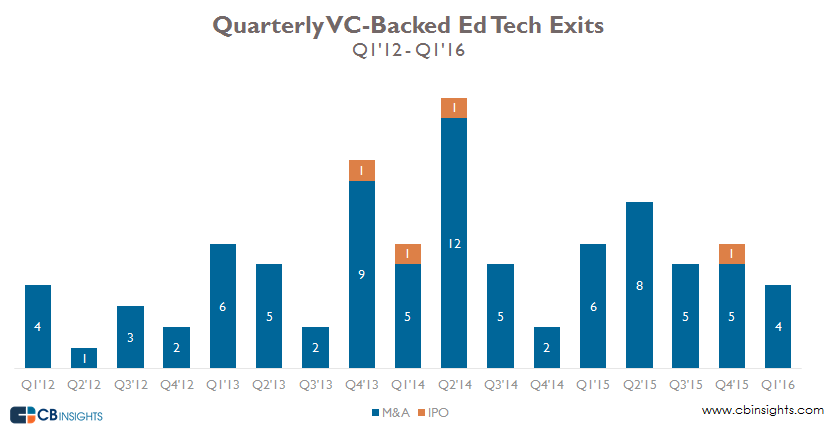 Below, we illustrate the most well-funded ed tech startups that have exited since 2012. Lynda.com had raised $289M from investors such as Accel Partners and TPG Growth when it was acquired by LinkedIn in 2015. It is followed by Chegg, which had raised over $248M prior to its IPO, and Achieve3000, which raised $247M before its acquisition by private equity and venture capital firm Insight Venture Partners.

Want more data about ed tech funding? Login to CB Insights or sign up for free below.

Featured image credit: Flickr/Luftphila
If you aren’t already a client, sign up for a free trial to learn more about our platform.