Research Brief
1321
2014 has global Ed Tech funding and deal activity on pace to top 2013's previous investment record. We dig into the most well-funded startups, most active acquirers and overall financing and exit trends.

The education industry is rapidly changing with students now able to take hundreds of courses, message their teachers and even learn languages all on a digital device. In recent years, disruption of the education industry has become the topic of frequent conversation – with Ed Tech startups see increased deal activity and funding.

This analysis provides an in-depth look at the Ed Tech financing landscape as well as the investors and companies fueling the this ecosystem.

Financing in Ed Tech has shown a clear upward trend, with consistent growth since 2010. Funding in 2013 represented a 212% growth in the sector since 2009. Deals have grown as well, with 334 deals occurring in 2013 representing a 35% year over year growth from 2012. Notably, 2014 is seeing funding and deal activity on pace to top 2013’s previous investment highs if the current pace continues. 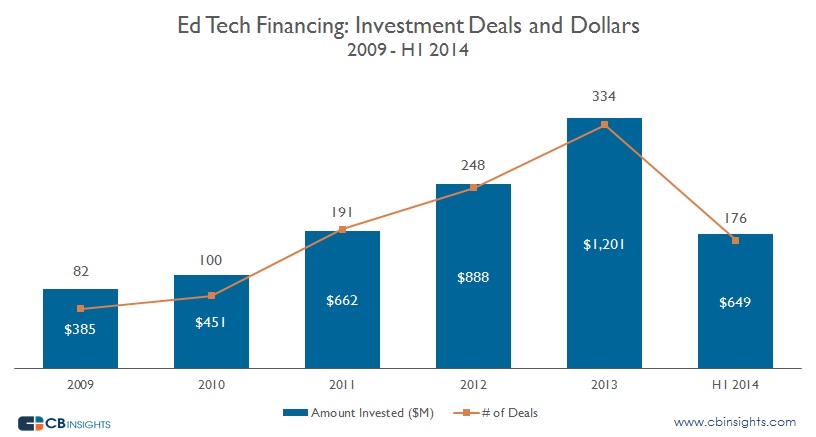 Looking at a quarterly view, we see the same trend. But while deals have increased at a more consistent rate, funding has had more quarterly spikes which are growing in size largely driven by a handful of large finanancings to the space that occur from time-to-time. Q1’14 has been the largest funding quarter since 2009, with $432M being spread across 95 deals. Some notable deals during this quarter include a $100M growth equity round to TutorGroup and a $47M Series E round to Kaltura. Q2’14 saw a significant drop in funding, investing only $216M in the quarter. 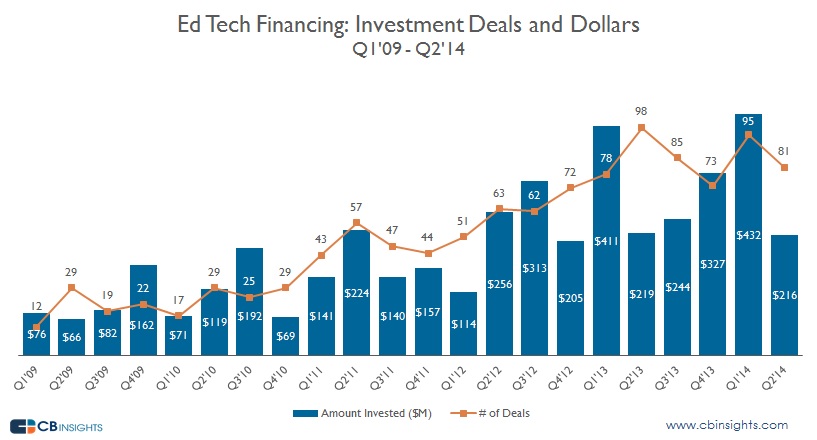 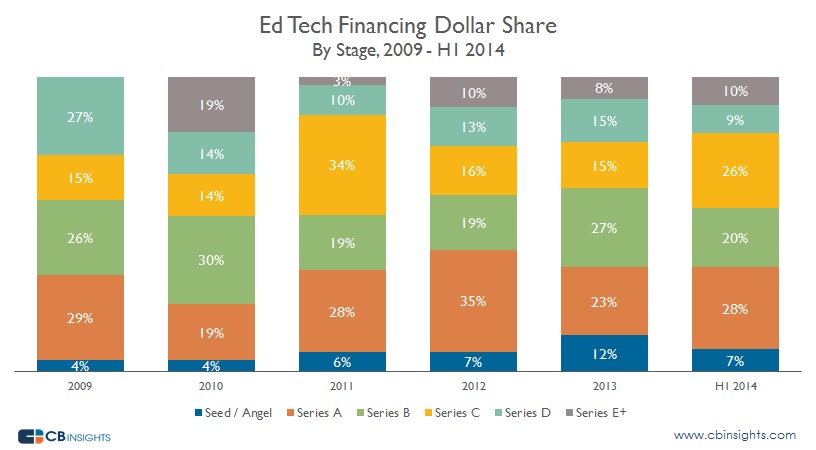 Peeling back deal share over the past five and a half years shows that the overwhelming majority of deals are occurring in the early stage rounds. This has remained consistent across the years with a growth in Seed/Angel rounds which took nearly 2/3 of all deals in 2013. Some notable deals in the early stage include: 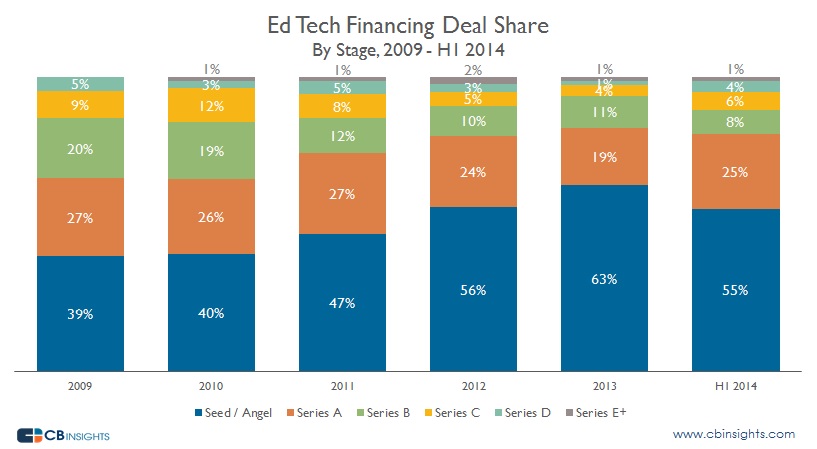 The most active cities for Ed Tech investment were the typical venture capital hubs including California, New York, and Massachusetts. California invested $1.4B across 283 deals, which was more than double the dollars and deals of New York, the second most active state. Pennsylvania, Illinois, and Colorado took the next spots, but had significantly less deals than the major cities.

Internationally, while the US led with more than $3.5B across 833 deals, India came second investing $116M across 63 deals and China following with $243M across 41 deals. 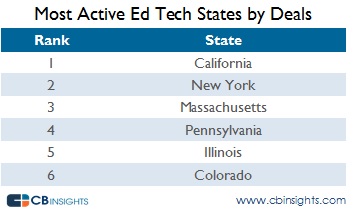 Open English is an online school created to reinvent the English-language-learning experience targeted towards Spanish and Portuguese speakers in the Americas, and topped the list of most well-funded companies. The company has raised of total $120M after a $65M Series D which included Insight Venture Partners, Flybridge Capital Partners, Technology Crossover Ventures and Kaszek Ventures.

TutorGroup is a provider of live synchronous e-Learning services focused on teaching language to global business professionals. The company is based in China, and has raised $115M through growth equity rounds which included QiMing Venture Partners, Temasek Holdings and Alibaba.com.

The third most well-funded company is Knewton. Based in New York, the company has raised $105M after raising a $51M Series E round which included Bessemer Venture Partners, Founders Fund, Accel Partners, FirstMark Capital, First Round Capital, Atomico and GSV Capital. 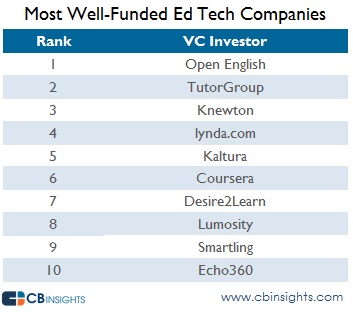 500 startups was the most active investor in the Ed Tech space, having invested in 29 unique companies since 2010 all in the early stages as might be expected. Their portfolio includes OKpanda, Udemy, and Mindsnacks.

The second most active investor was NewSchools Venture Fund, a non-profit venture philanthropy firm. They have invested in 25 unique companies, with the majority being in early stages. Some notable exceptions include Series D rounds to Learnist and Parchment, as well as a Series B round to Kidaptive.

Closely after was Kapor Capital, which has invested in 24 unique companies including Newsela, ClassDojo, and Chromatik. 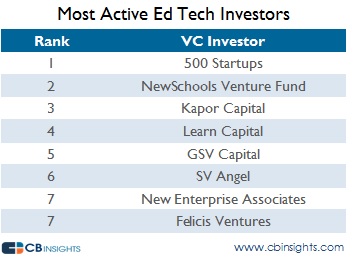 Early stage was as might be expected where the most activity for investment in Ed Tech was, and the top investors closely follows the overall top investors chart. 500 startups and NewSchools Venture fund held their top positions, while Learn Capital and Kapor Capital tied for third. LearnCapital is a venture firm focused exclusively on Ed Tech based in California. Google Ventures, The Social+Capital Partnership, and Founder Collective were new additions to this ranking compared to overall investors. 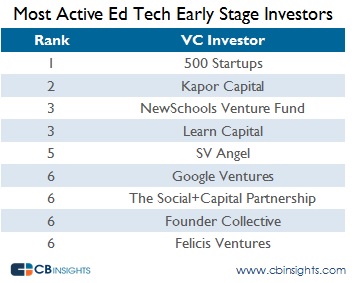 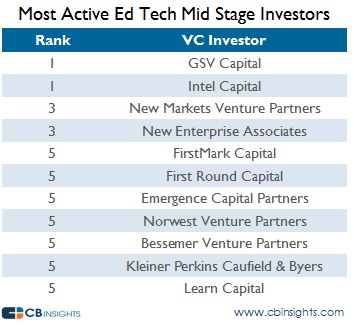 Exit activity hit a peak in 2012 with 61 exits occurring, though none of them were IPOs. 2013 saw a dip in the number of exits that occurred, but the first half of 2014 has already seen 43 exits and 2 IPOS including 2U and RareJob. Pearson and BlackBoard have been the most active acquirers of ed tech companies, with Pearson having acquired 13 companies and Blackboard having acquired 10. 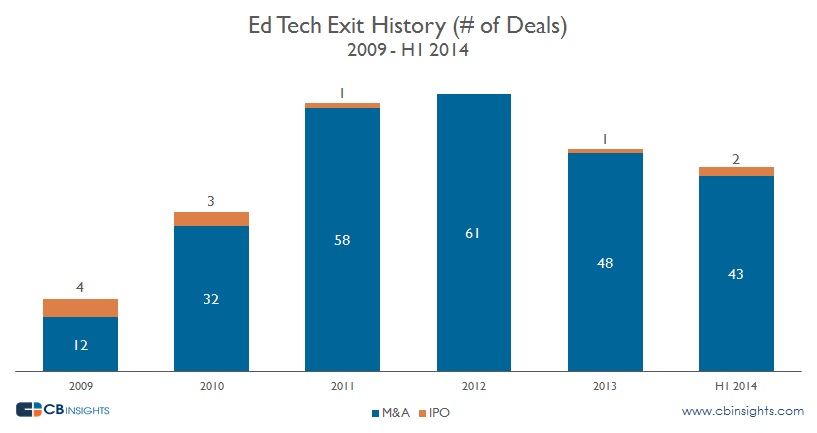 To track ed tech financing and exit activity and the startups, investors and acquirers behind them, create a free account below to the CB Insights venture capital database.
If you aren’t already a client, sign up for a free trial to learn more about our platform.