At the current run-rate, overall funding to private ed tech companies globally will be down 57% this year, following 2015’s record highs.

Corporate investment in ed tech followed a similar pattern, with corporations and their venture arms — including Intel Capital, Pearson, and Google Ventures — involved in a record 65 ed tech deals worth nearly $1.2B in 2015, but dialing back their investment so far this year.

At the current pace, corporates will only participate in $432M of funding to ed tech in 2016, across 60 deals.

Using CB Insights data, we spotted several bright spots despite the overall slump. For example, US ed tech startups are bucking the global trend and are actually seeing growth in corporate-backed deals.

But if current trends continue, corporates will retreat slightly in deal participation and massively decrease financial involvement in 2016. Corporations participated in 18 ed tech deals worth a total of $129M in 2016 year-to-date, implying an end-of-year total of 60 deals and $432M in funding. This would be a deal decrease of 8% and funding drop of 63% compared to last year. 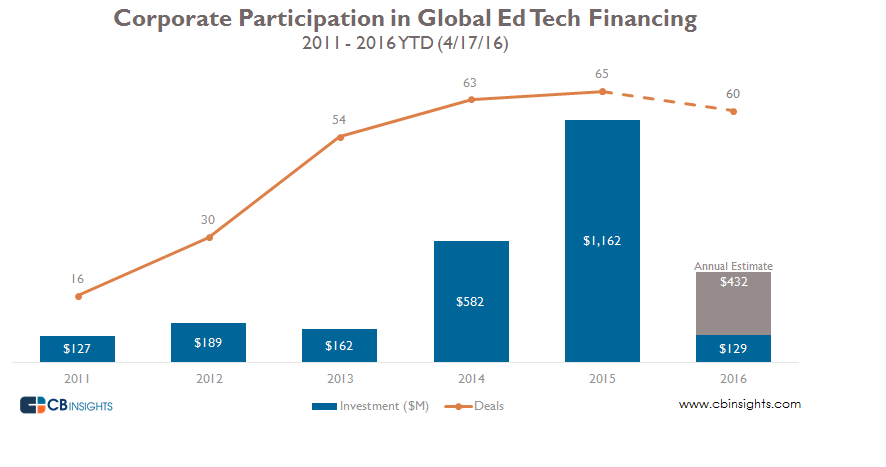 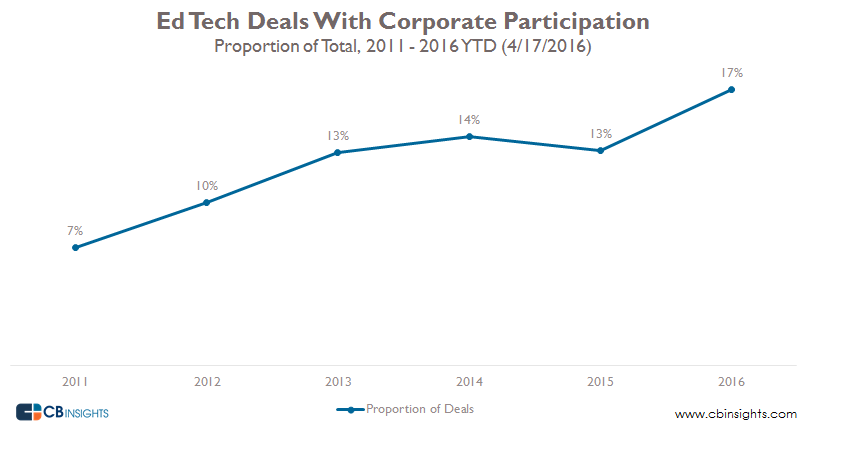 Corporations have generally participated in early-stage deals. Thirty-three percent of ed tech deals with corporate involvement over the last five years were seed/angel rounds, and 19% were Series A. Only 2% of deals were Series E+.

In fact, just four companies have received Series E or F rounds with corporate involvement since 2011, including Knewton in 2016, and the video-focused Kaltura in 2014. 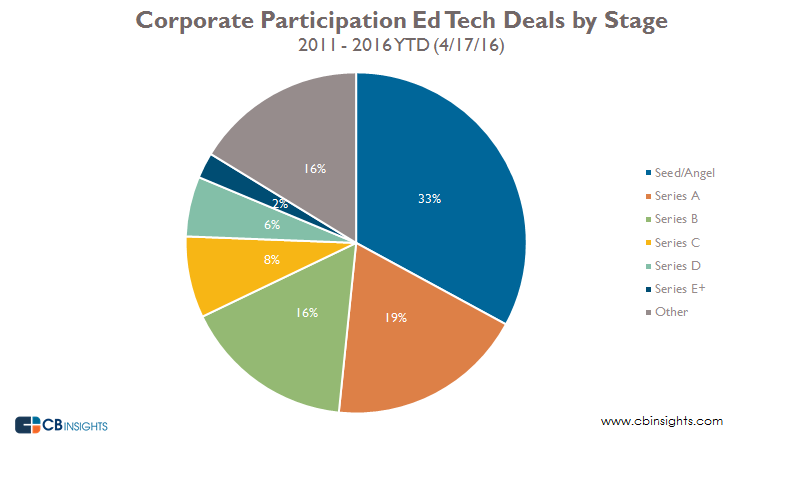 While 33% of the deals corporations were involved with were seed/angel, these deals represented only 3% of the dollars, due to their small average size of $1M.

Series B, C, and D deals attracted more dollar share than deal share, and combined for 67% of dollars flowing to ed tech over the last five years.

Interestingly, the largest deal in each of these three stages went to China-based companies. These were TutorGroup‘s $100M Series B in 2014 backed by the Alibaba Group; tutoring platform Changingedu‘s $100M Series C in 2015 with participation by Chinese K-12 tutoring corporation TAL Education Group; and language-learning platform HuJiang‘s $157M Series D last year, backed by WanXin Media. 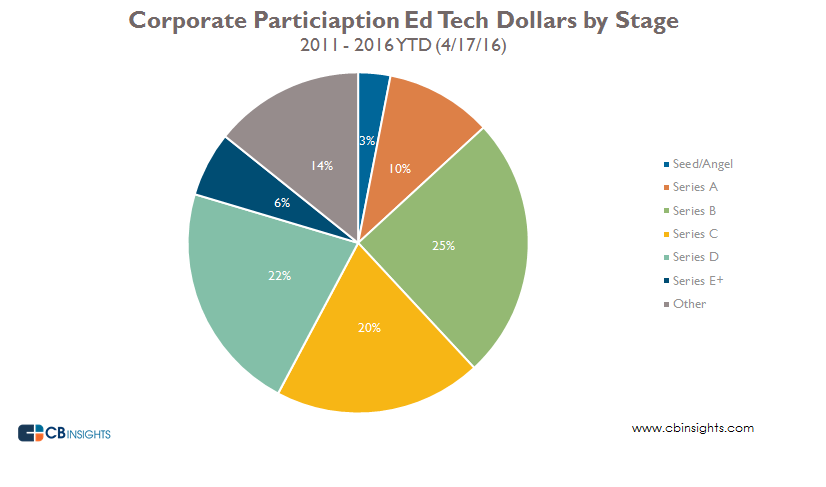 The US has seen over 120 corporate-backed ed tech deals since 2011. China ranks next with 35, followed by India, Japan, and Germany.

This brief has already discussed US and China, but notable companies with corporate backing in other major markets include India’s Applect Learning Systems, dba as Meritnation, which has $21M in total disclosed funding and is backed by India’s online classifieds giant Info Edge; Japan’s Smart Education, which develops education apps for kids, and has raised over $6M from investors including Japanese internet/gaming corporation CyberAgent; as well as Germany’s language-learning startup Babbel, which has over $33M in total funding, and is backed by Nokia, among other corporates. 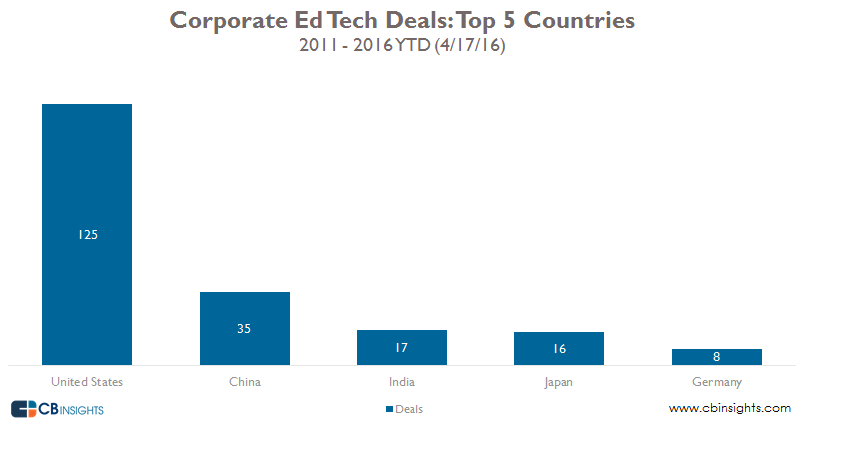 US corporates invest more, as rest of world and China pull back

There has been steady growth in US ed tech deals with corporate involvement over time, in contrast to the global slowdown. US growth is set to continue this year, with the year-to-date trends implying 33 deals for all of 2016, compared to 29 last year.

On the other hand, corporates have dialed back on deals to Chinese ed tech startups since their peak of involvement in 2014. The trend mirrors — and in fact pre-dates — an overall slowdown in Chinese ed tech funding, which has slumped into 2016. 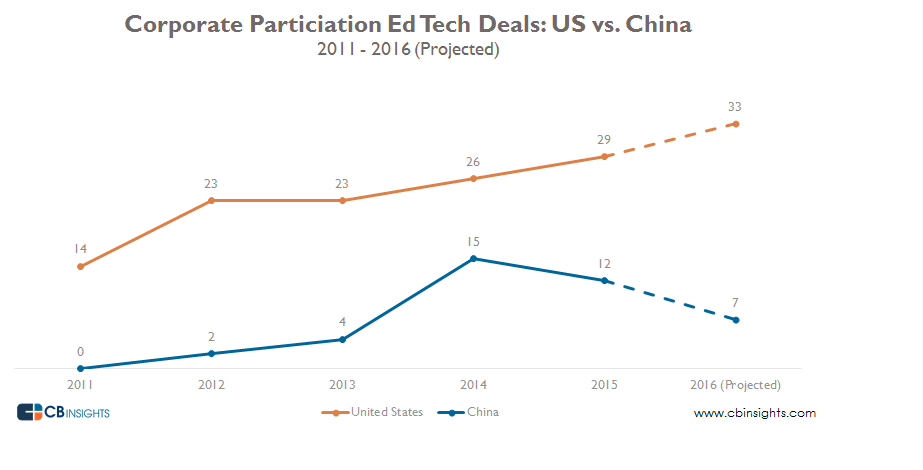 Intel Capital is the most active corporate investor in ed tech, with numerous mid- to late-stage deals in the 2010-2014 period. In August 2015, Intel Capital also funded a batch of $100k seed/angel deals as part of the Intel Education Accelerator program.

Want more ed tech data? Sign up for our venture capital database below.