Research Brief
1350
The education category has seen its share of the top mobile apps jump from under 2% to nearly 6% as the school approaches.

The new school year is upon us and, according to the data, a number of education apps are getting solid marks. Last month, John Doerr of Kleiner Perkins Caufield & Byers captured the excitement of smartphones entering the classroom, writing:

“In the coming weeks, 55 million U.S. students in grades K-12 will go back to school. In their backpacks they will carry pens, No. 2 pencils, 3-ring binders and calculators. But most students will also carry something that their parents’ generation could never have imagined: a smartphone.

And that changes everything. The mobile technologies that have revolutionized the American workplace are now transforming our education system.”

The chart below shows the percent share of education apps in the top 1000 overall apps in the App Store by weekly average between May 25 and Aug 24. While education apps see smaller share than other categories (most significantly, games, which consistently takes over 30% share), education apps have seen share rise from 1.9% to 5.6% in the week starting Aug. 24 – the biggest jump of any category over the period.

Given the back to school time period, there is obviously a seasonal aspect to the growth but the jump of nearly 3x in terms of share is notable. 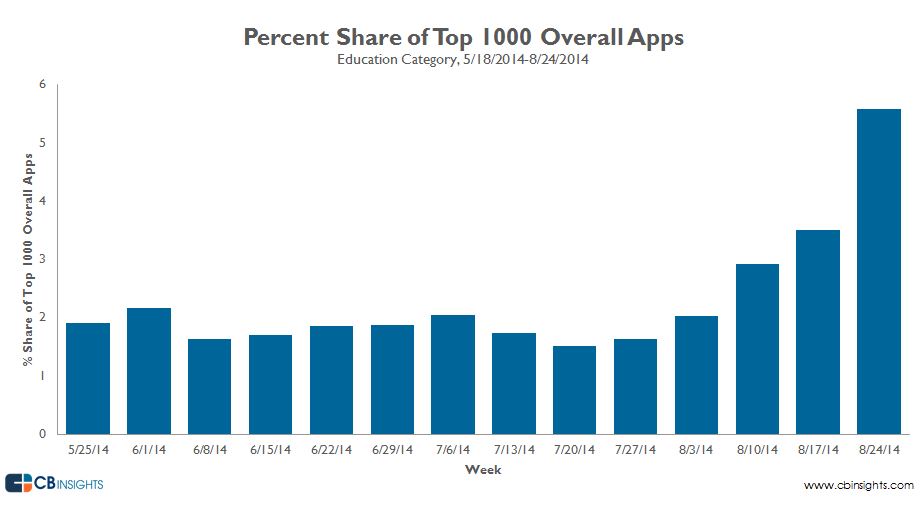 Which VC-backed ed tech apps are getting good grades?

Next, we tracked which venture-backed education apps saw some of the biggest movements in the overall top 1000 App Store ranks in August using our ‘Significant Rank Improvement’ mobile app alert algorithm. Below are five such apps that met the criteria.

Remind – Mobile messaging app that lets students and parents stay in touch with teachers. Backed by over $19M from investors including The Social+Capital Partnership, First Round Capital and Kleiner Perkins Caufield & Byers. We’d previously highlighted how Remind had become the top-performing ed tech startup in mobile.

Below is a chart of the top 1000 overall rankings for the five aforementioned VC-backed education apps between June and August 20th, highlighting the clear rank surge. Whether this momentum is sustainable is to-be-seen. We will continue to monitor the mobile app data for any noteworthy shifts in the ed tech market. If you’d like to to stay abreast of additional mobile app store analyses and fast moving publishers, sign up for our free newsletter. 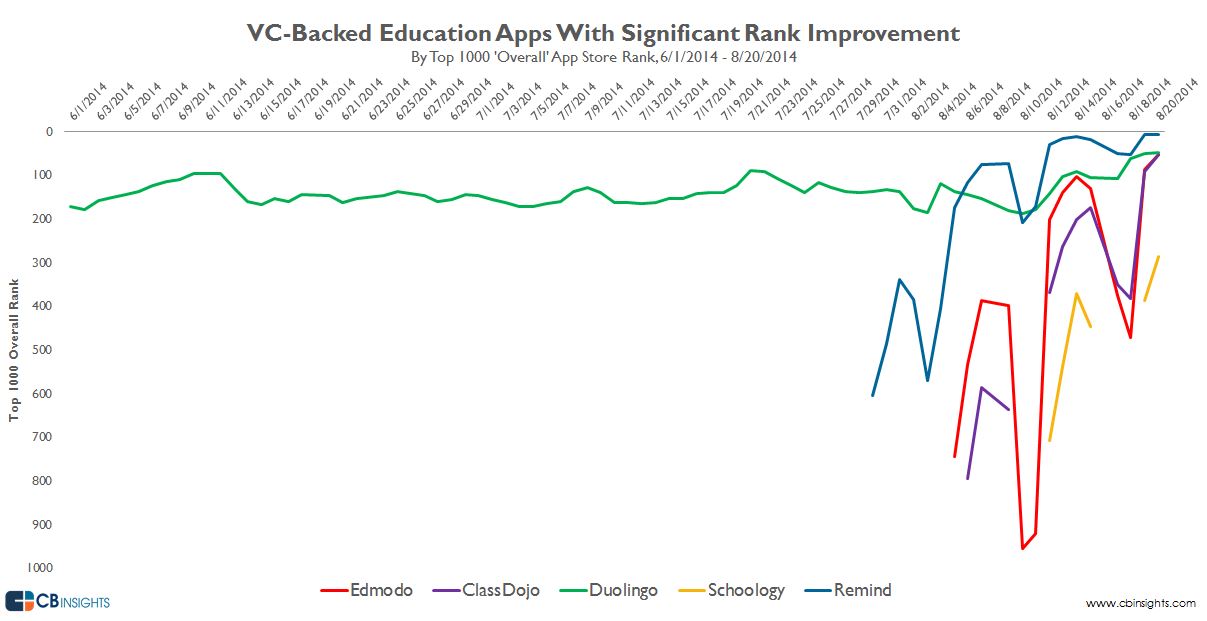