Research Brief
2631
After a big 2015, ed tech fell back to earth in Q1'16, with funding dropping to a 7-quarter low and deals well off their peak levels.

Funding to ed tech companies plunged dramatically in Q1’16 compared to the previous quarter, and put 2016 on track for the lowest annual funding total to the category since 2013. The flurry of $100M+ mega-deals that shaped ed tech trends in 2015 have been conspicuously absent so far this year.

Deal activity to education technology startups jumped to record annual highs in 2015, with annual funding up 64% to over $3.1B, and the number of deals rising nearly 10% to 491.

However, year-to-date activity is sluggish, and at the current run-rate 2016 will see just 376 deals and $1.3B in funding, which would be a dollar funding decrease of 57% compared to 2015. 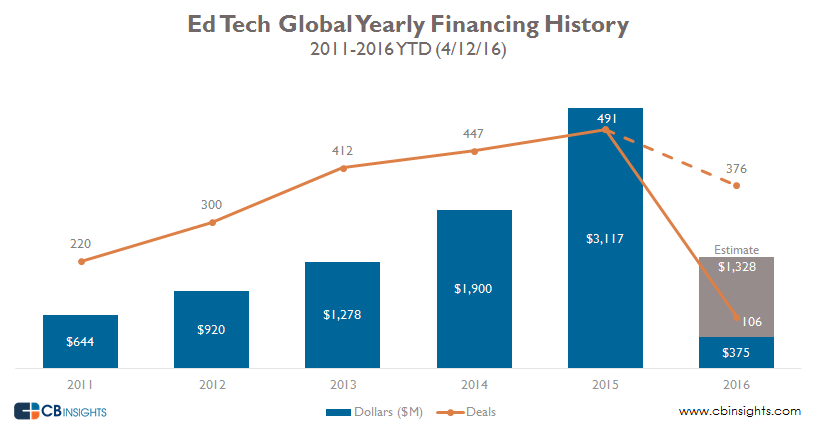 Funding in Q1’16 fell to a 7-quarter low, well off ed tech’s quarterly peak of $1.3B in Q4’15, even as deal count stayed essentially flat compared to the previous quarter, at 103. However, Q1’16 marks the eighth quarter-straight of more than 100 ed tech deals.

The largest deal so far in Q2’16 (not pictured in chart) is a $16M Series B to enterprise-focused learning platform EdCast. Investors included Softbank Capital, StartX, Cervin Ventures, and GE Capital. 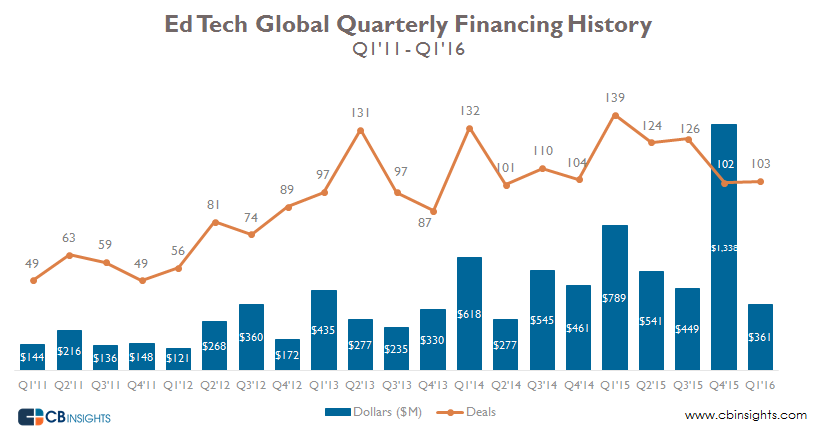 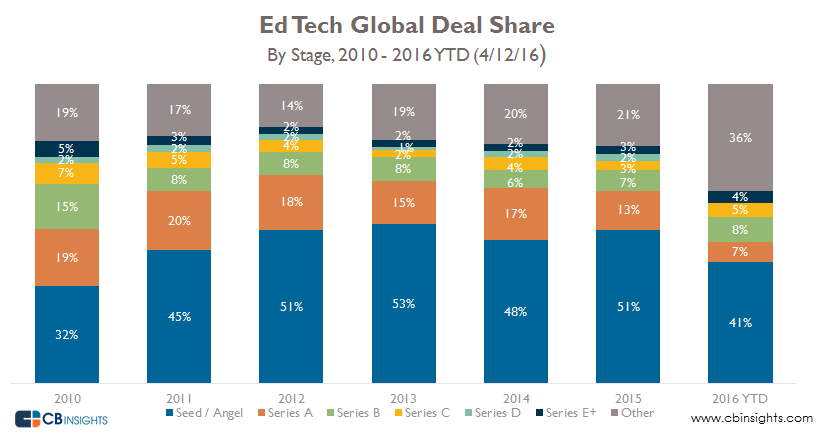 Our data shows a gradual shift in dollar share from early-stage to later-stage companies. The trend is especially apparent among 2016’s deals to date, which saw a high of 32% of dollars going to Series E+ deals. 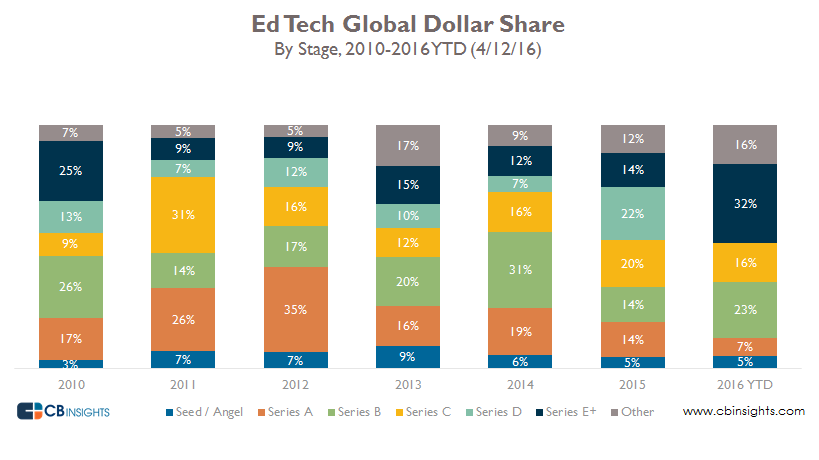 NewSchools Venture Fund took the top spot for most active ed tech investor with over 35 deals, while Kapor Capital and 500 Startups tied for second (NewSchools is a non-profit venture fund focused on education). Intel Capital is the sole corporate venture on the list, tied for sixth with over 10 deals.

See the full list below. Note these rankings exclude deals by startup incubators/accelerators.

Kapor Capital and 500 Startups tied for first place as most active investor in early-stage ed tech startups, and NewSchools Venture Fund placed third with over 30 deals. The vast majority of these firms’ ed tech deals have been to early-stage companies. In contrast to the overall most active investors list, the early-stage list does not include any corporate ventures.

The 10 most well-funded ed-tech companies have all raised over $100M. Many of the top 10 are video-based online learning platforms, including Shanghai-based English learning site TutorGroup, online course platforms Udacity and Coursera, and personalized study platform Knewton. The only non-software company on the list is AltSchool, a San Francisco-based company building a system of K-8 “micro-schools.”

See the full list below. Note that these funding figures exclude debt rounds, lines of credit, and exited companies.