Research Brief
1495
Early-stage (Angel-Series A) financings reached their highest monthly total in two years at $1.25B. We looked at the trends and momentum of the companies involved.

The report below details early stage (angel – Series A) technology financings and some of the hottest early-stage companies that were funded in October 2014.

Specifically we looked at:

Early-Stage funding in tech companies skyrocketed to a two-year high in October 2014, up 56% over the same month last year on a funding basis.

Silicon Valley continues to account for about 1/3 of all early-stage tech deals in the US, as most regions remained range-bound.

Early-stage tech funding share to Silicon Valley startups jumped drastically to 52% in October 2014 versus the same month a year prior. This was the result of the 3 largest US Deals all going to companies based in Silicon Valley.

October held September’s median deal size high across all early-stage tech at $2M, while average deal size increased to $3.42M, just off the highs seen in June 2014 of $3.65M. 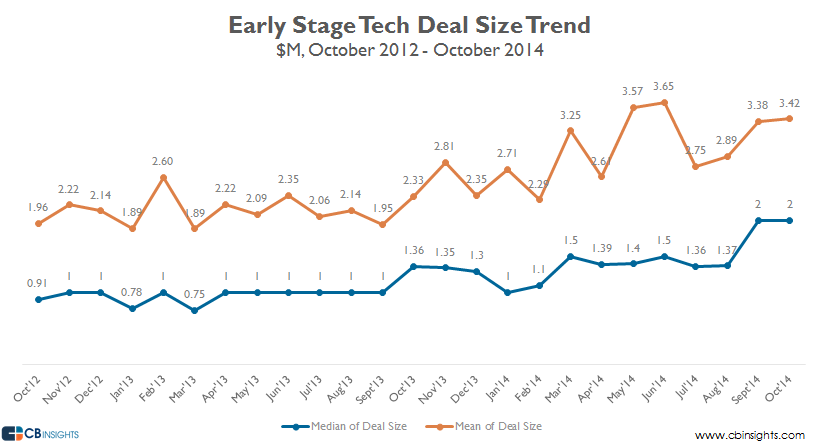 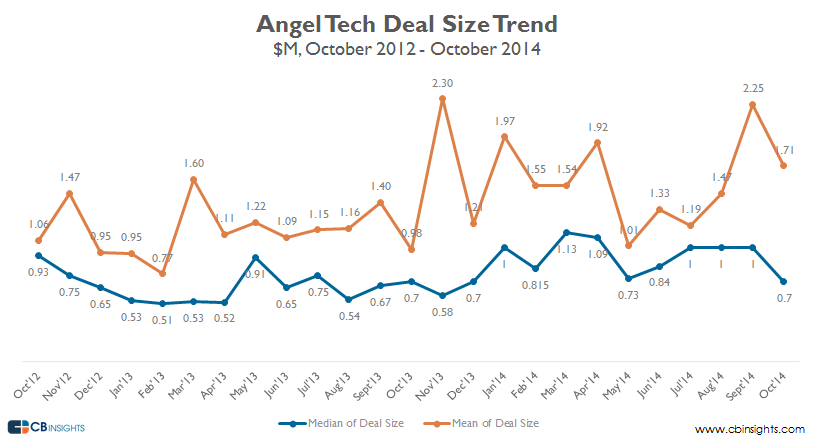 While average seed rounds to tech startups reached their highest total over the past two years, median round size fell off September’s two-year high as the median seed round was $1.02M in October 2014.  Overall, seed deals have been steadily climbing over time. 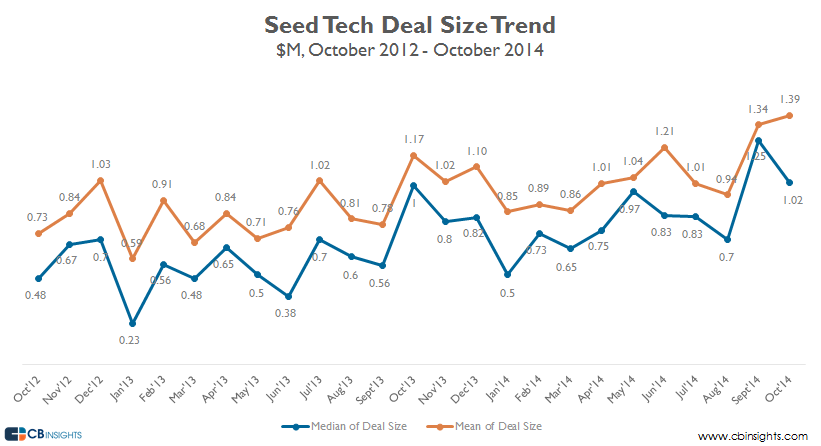 SERIES A ROUNDS AT $5M FOR SECOND STRAIGHT MONTH

Series A median deal size stayed at $5M in October, after a 25% increase in deal size in August. Multiple $20M+ Series A deals, propelled average deal size to $6.76M. While ticking up, this was still considerably lower than their May 2014 highs, a month which saw Takealot Online, Oscar Health, and Mozido all raise $80M+ Series A rounds, driving the average round size to $8.21M. 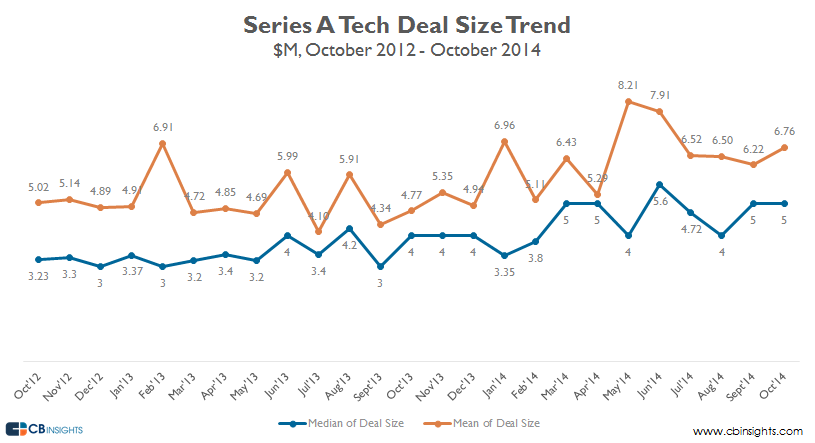 Internet startups made up 66% of all early-stage tech deals in October 2014, only slightly off of a 2013 high of 71%. Mobile is the other big winner in tech with other areas (computer hardware, chips & semis (electronics) and software) making up less than 15% of deals. 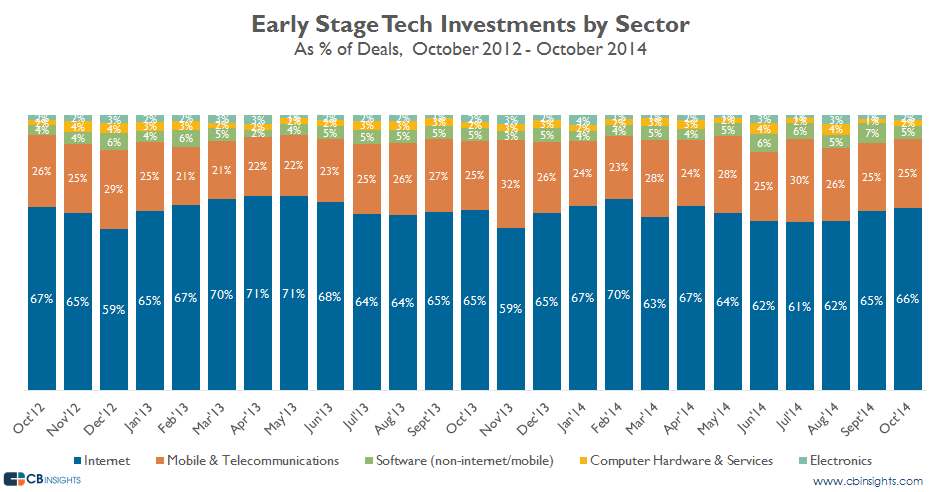 Four of the top five early stage deals in October, totaling over $150M, went to internet companies, driving the 69% dollar share and subsequently leading to a halving of dollar share to software companies from 8% in September to 4% in October. 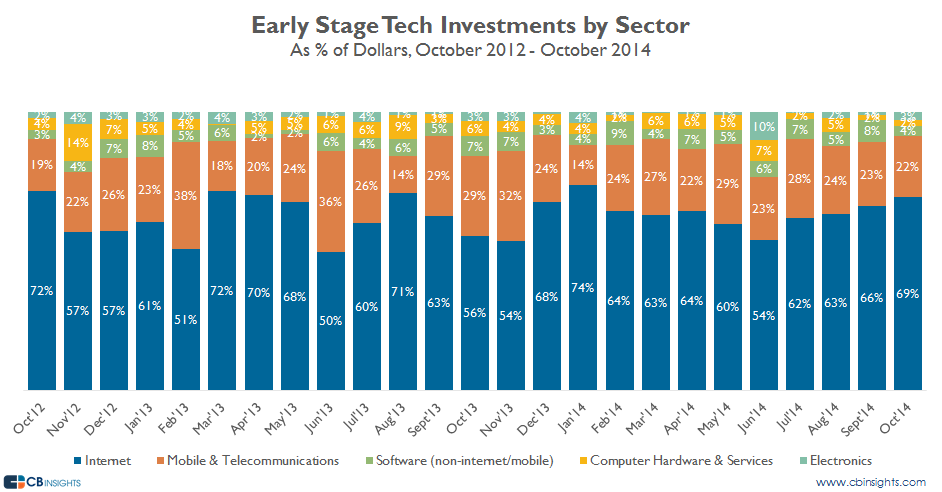 HALF OF ALL EARLY-STAGE TECH DEALS DONE AT SEED STAGE

Seed stage companies accounted for over half of all early-stage tech deals yet again. All other stages were relatively range-bound. 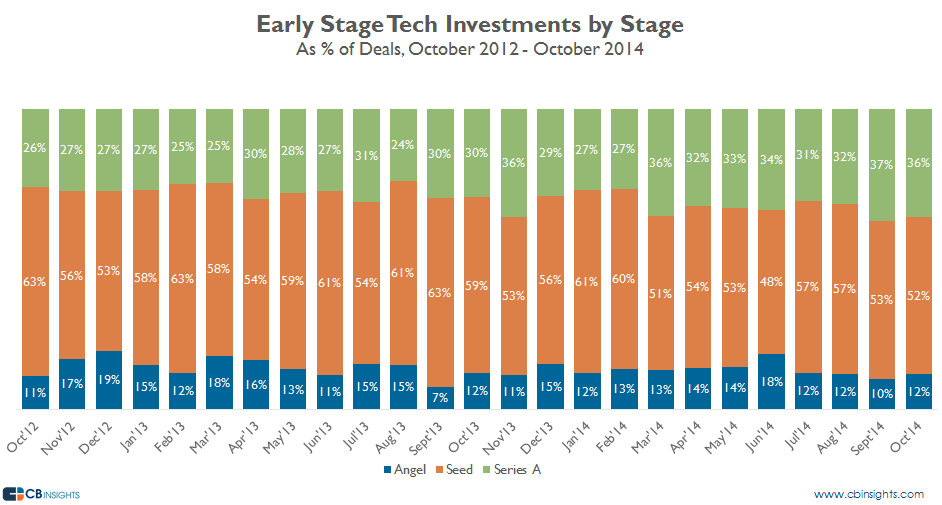 Germany-based High-Tech Gruenderfonds was the most active early-stage VC in October, investing in over 6 companies in October. 500 Startups came in second while multiple firms tied for third. 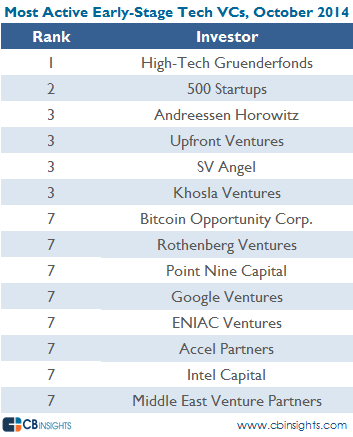 Supply chain & logistics startups saw the largest deal growth of any tech sub-industry in October 2014 versus the same month a year prior, while sports tech companies saw a 70% drop-off from over 10 deals to less than 5 in October 2014. 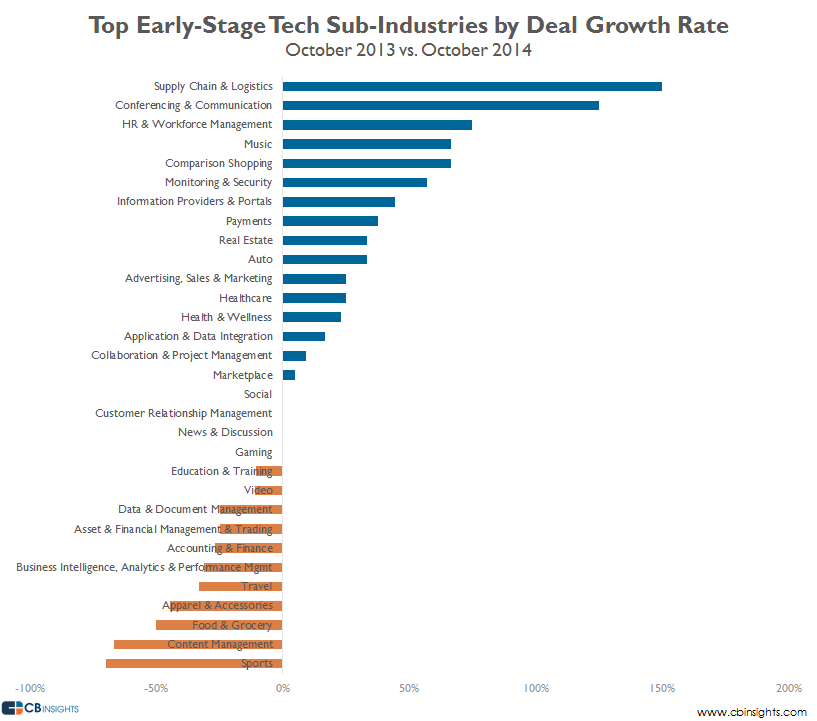 We used performance metrics to create momentum scores for both Facebook (Likes growth) and Twitter (Mention growth) for the companies funded in October 2014. To be included in each list, the company had to have over 100 likes in the previous month and 25 or more twitter mentions. Below are the 6-20 ranked companies. The full top 20 is available to CB Insights customers on the research tab. 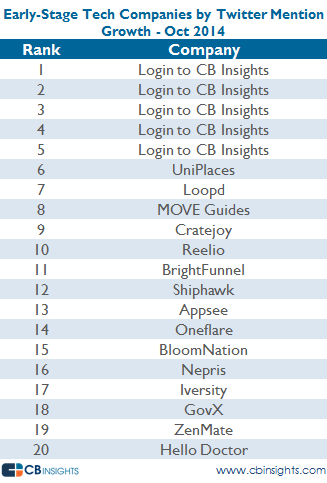 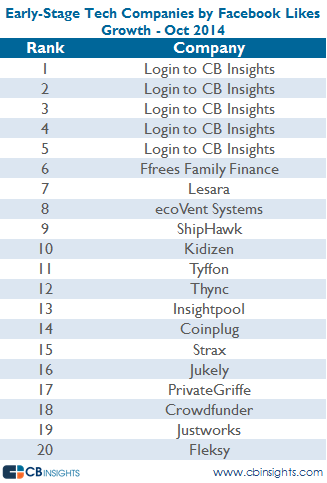 We also tracked overall news mentions as well as web traffic metrics (pageviews, reach, rank) for early-stage tech companies that received financing in October 2014. Below are the 6-20 ranked companies in each metric. The full top 20 is available to CB Insights customers on the Research tab. 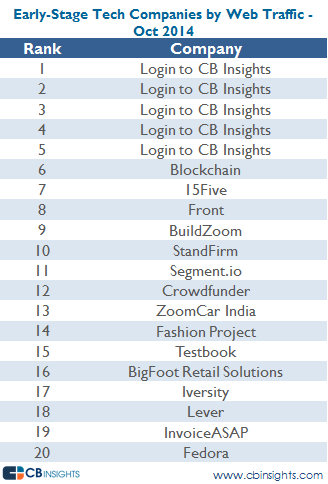 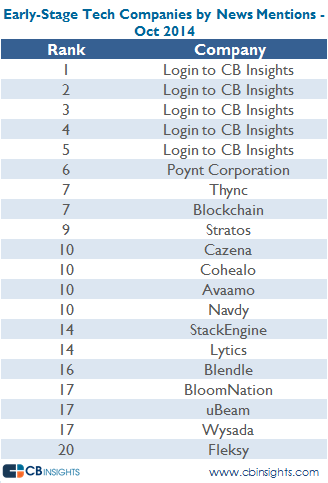 For more information around early-stage tech financings login to CB Insights’ venture capital database or sign up for free below.