Research Brief
1523
Despite falling off of a two-year high, early-stage startups still managed to raise over $1B for the third straight month in November.

November saw another $1B+ going to early-stage startups, while average round sizes fell across all rounds of early-stage financing. The report below details early stage (angel – Series A) technology financings and some of the hottest early-stage tech companies based off of social media, news, and web traffic momentum that were funded in November 2014.

Specifically we looked at:

Early-stage funding in tech companies fell versus the previous month to $1.05B. Deals were almost even while dollars were up 18% versus the same month a year prior.

Silicon Valley continues to account for just under 1/3 of all early-stage tech deals in the US, as most regions remained range-bound.

Early-stage tech funding share to Silicon Valley startups fell from 52% in October 2014 to 38% in November 2014. This past month was also down versus the same month a year prior, despite 2 of the 3 largest early stage deals taking place in Silicon Valley.

November saw a slight dip in median deal size versus the highs of the prior two months – falling to $1.7M. Average deal size fell for the first time in three months to $3.16M. 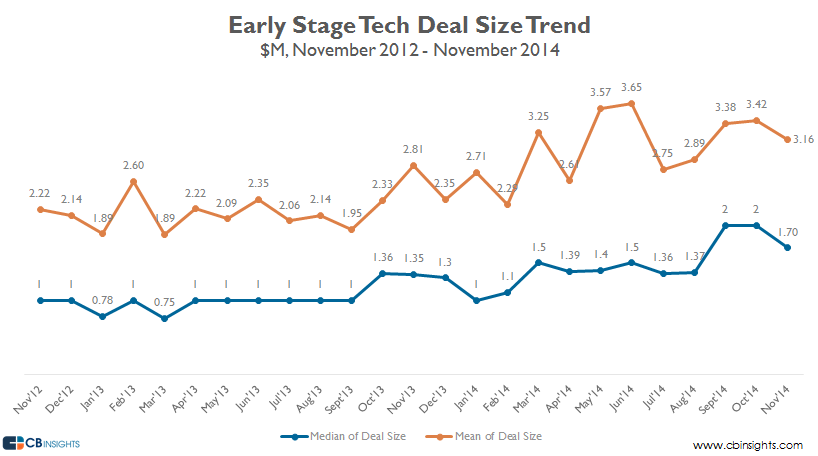 Among angel investments into tech, median deal size bounced back to $1M in November. The average deal size fell for the second straight month to $1.47M as overall funding dropped. 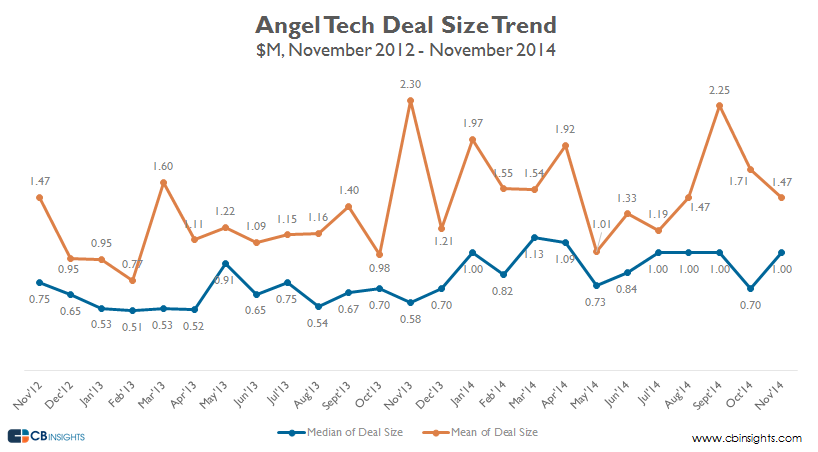 Despite the modest slip in mean and median tech seed deal sizes in November, both are still up 28% and 25% respectively versus the same month a year prior. 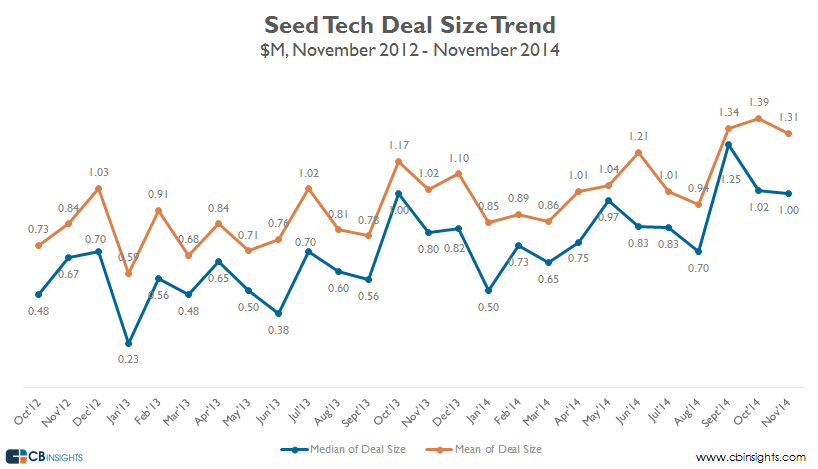 SERIES A ROUNDS AT $5M FOR THIRD STRAIGHT MONTH

Series A median deal size stayed at $5M once again in November. $20M+ Series A deals to companies including Scopely and Shift Technologies kept mean Series A round sizes above $6M for the seventh straight quarter. 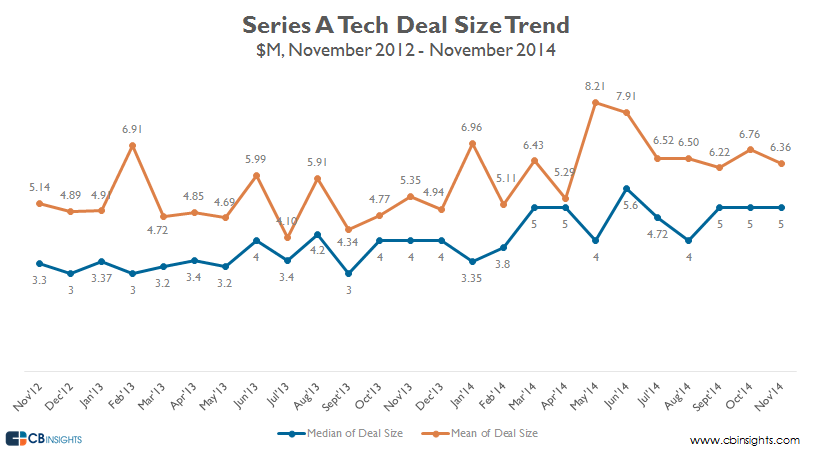 Three of the top five early stage deals in November, totaling over $115M, went to internet companies, driving the 60% dollar share to the sector. Mobile & telecom startups accounted for over ¼ of all dollars invested in early-stage tech in November, behind Scopely’s $35M Series A.

Seed stage companies tied a two-year low in November with just a 48% deal share. Conversely, Angel deals tied for their highest share since December 2012 at 18%. 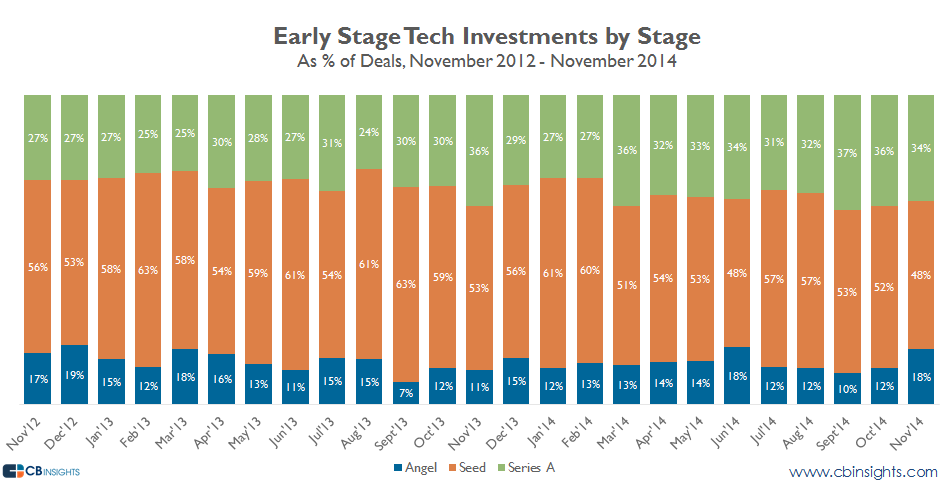 INTEL CAPITAL IS MOST ACTIVE EARLY STAGE INVESTOR IN NOVEMBER

Intel Capital was the most active VC in early-stage tech in November, investing in 10 companies largely at the Seed stage. 500 Startups and SV Angel rounded out the top 3 with 5+ investments each in the month.

News & Discussion and Video startups both saw 200% deal growth in November 2014 versus the same month a year prior, while BI companies saw a 50% drop-off from over 25 deals to less than 15 in November 2014. 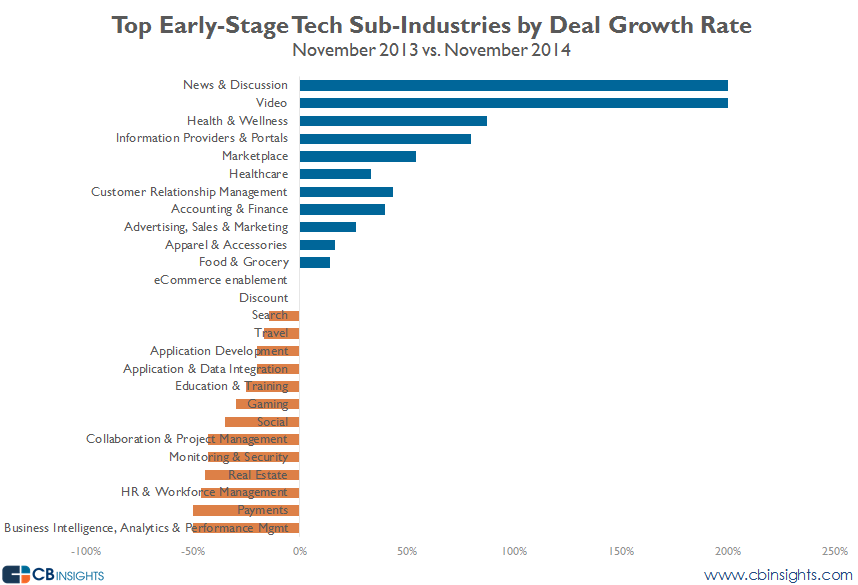 We used performance metrics to create momentum scores for both Facebook (Likes growth) and Twitter (Followers growth) for the companies funded in November 2014. To be included in each list, the company had to have over 100 likes in the previous month and 50 or more twitter followers. Below are the 6-20 ranked companies. The full top 20 is available to CB Insights customers on the Research tab.

We also tracked overall news mentions as well as web traffic metrics (pageviews, reach, rank) for early-stage tech companies that received financing in November 2014. Below are the 6-20 ranked companies in each metric. The full top 20 is available to CB Insights customers on the Research tab.

For more information around early-stage tech financings login to CB Insights’ venture capital database or sign up for free below.