Five self-driving tech startups have raised over $57M since January 2016 across more than eight deals.

The buzz surrounding auto tech has motivated investors and established automakers alike to make private company deals with newfound speed. Large, public tech companies like Google and Tesla dominated autonomous driving headlines in years past, but startups are edging their way into the conversation.

Unsurprisingly, GM’s March 2016 acquisition of Cruise Automation has been a further catalyst for young startups in the space. The $1B+ valuation of this first major self-driving exit raised eyebrows across industries and set a high benchmark for similar companies.

We used the CB Insights Company Comparison Tool to compare the vitals of 5 private autonomous tech startups that have raised funding in 2016 year-to-date. Our comparison focuses on small early-stage startups (seed/Series A), and excludes a notable company in Zoox as it has just raised $100M in an ongoing Series A with a robust $200M+ target.

Click on the image to enlarge. Note: This comparison is available across all private companies in the CB Insights database. 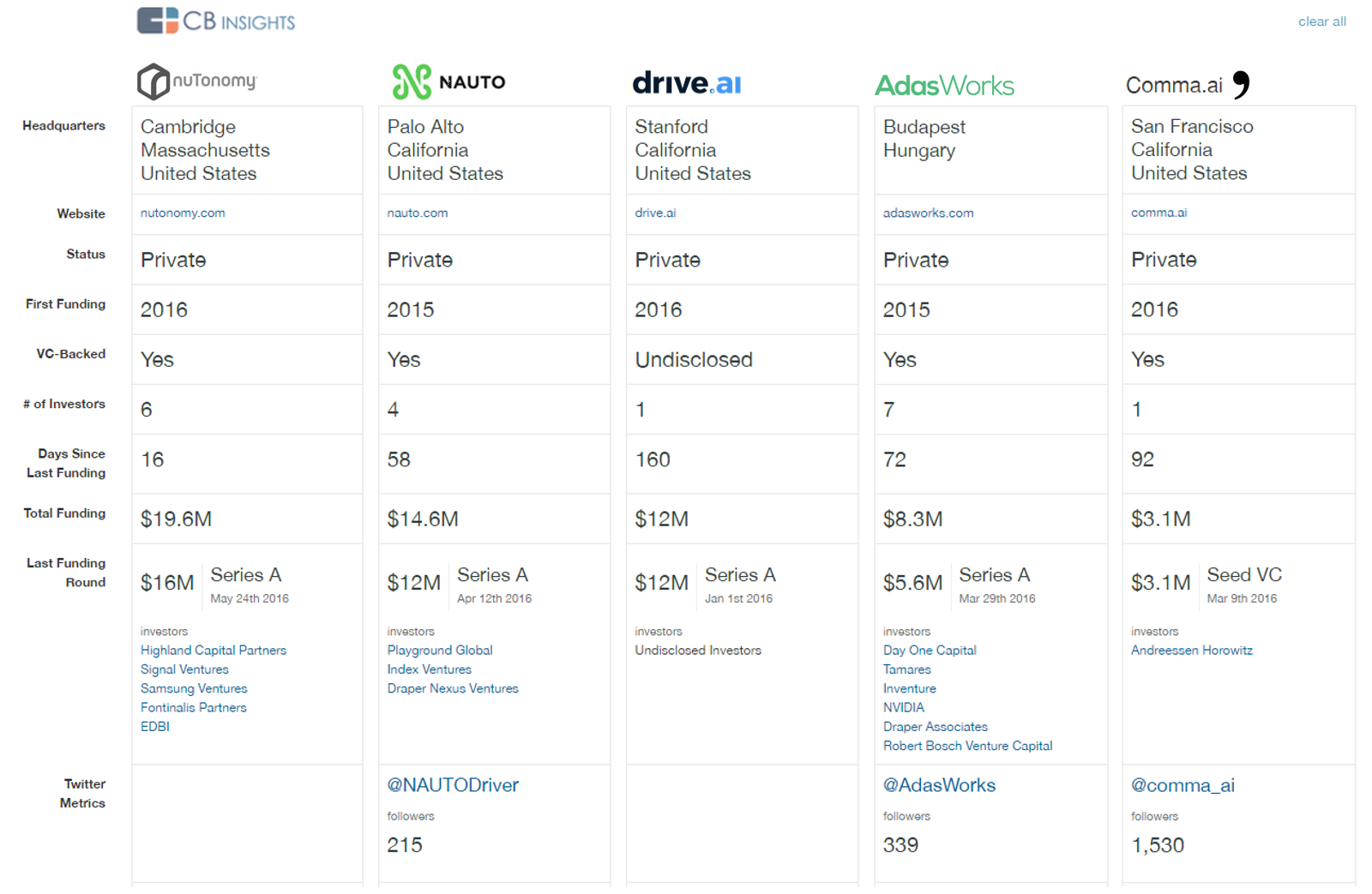 Many self-driving startups have been operating stealthily (and a number still are), but the Cruise acquisition has likely helped coax some players out of the woodwork. The companies featured here — nuTonomy, Nauto, Drive.ai, comma.ai, and AdasWorks — represent a variety of approaches to the self-driving puzzle.

Their strategies range from developing autonomous urban taxis (nuTonomy) to self-driving deep learning and AI software (Drive.ai, AdasWorks) and “aftermarket kits” to turn existing vehicles into smart, self-driving ones (comma.ai, Nauto). Within that last group, comma.ai is aiming directly for a Cruise-esque self-driving kit, whereas Nauto is beginning with an advanced driver assistance system (ADAS) to build a rich dataset on driving behavior and move toward self-driving later.

The investors backing these companies are just as diverse. Comma.ai received a $3.1M seed investment from Andreessen Horowitz in March, a few months after founder George Hotz was first profiled in a December 2015 Bloomberg feature. Tim Draper is linked to both Hungary-based AdasWorks and Palo Alto’s Nauto, the former through Draper Associates and the latter via Draper Nexus Ventures.

nuTonomy, the most well-capitalized of the group, just raised $16M weeks ago in its Series A after a $3.6M seed round in January. Its backers include a corporate venture arm in Samsung Ventures, a VC stalwart in Highland Capital, and the mobility-focused Fontinalis Partners (co-founded by Bill Ford).

Of these 5 companies, 4 have received funding in the last three months. It’s also worth noting that two of these startups spun directly out of universities: nuTonomy from MIT and Drive.ai from Stanford’s Artificial Intelligence Laboratory. 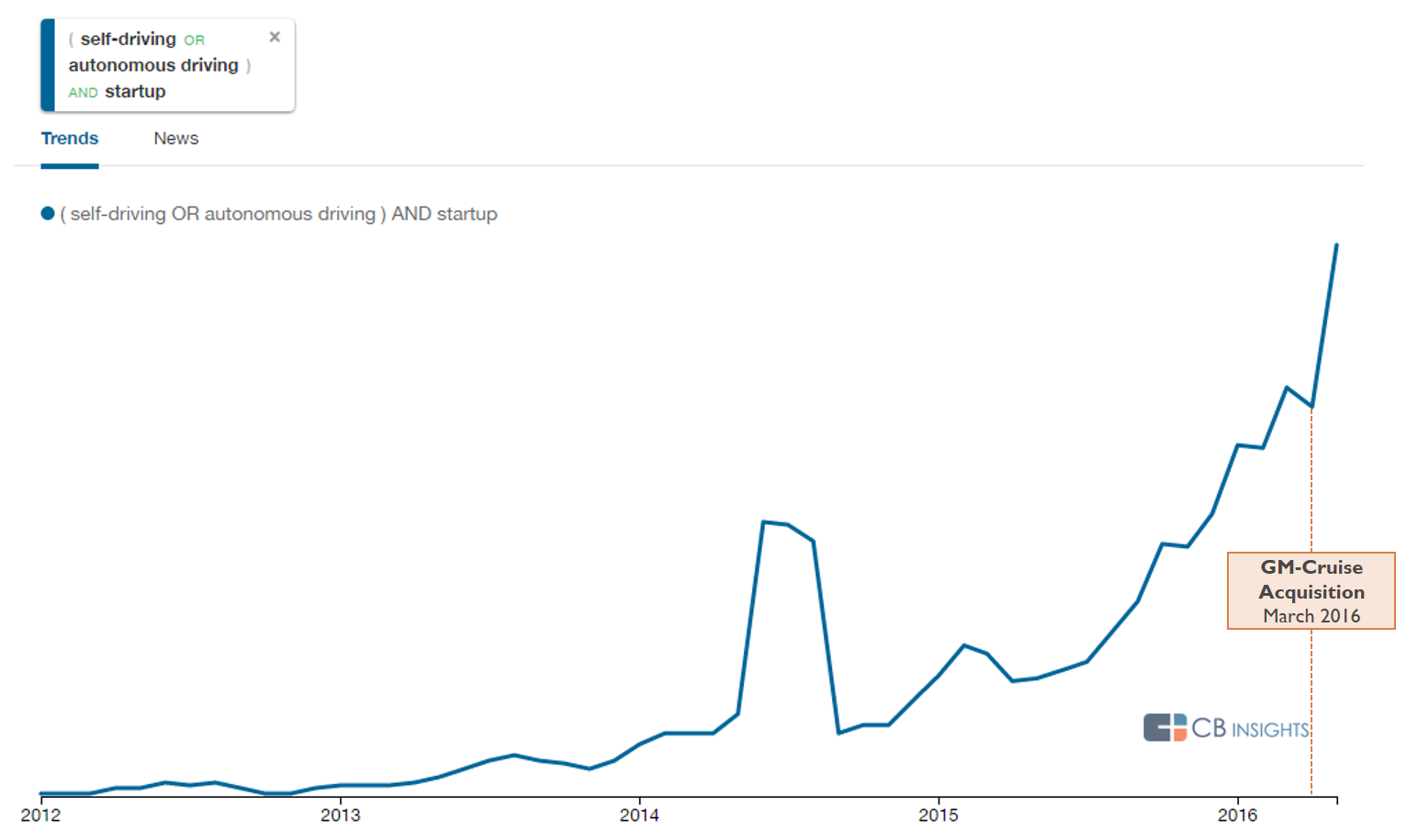