E-sports M&A activity has picked up in 2016 with acquirers ranging from Amazon's Twitch to Activision Blizzard to Microsoft.

On the back of large deals to companies including Chinese streaming platform DouyuTV and gaming text and voice chat service Discord, investment to e-sports companies is on pace for a new funding high.

While consisting mainly of smaller, tuck-in acquisitions, M&A activity in the e-sports space has also bumped up in 2016 year-to-date, according to CB Insights data.

As the chart below highlights, e-sports M&A volume in 2016 year-to-date has already more than doubled that in all of 2015. 2016 acquisitions to date include Microsoft’s purchase of interactive game-streaming service Beam, Twitch’s acquisition of communication platform Curse, GAME’s acquisition of Spanish e-sports social network SocialNAT, and Activision-Blizzard’s purchase of e-sports digital network Major League Gaming.

Smaller acquisitions in the e-sports space in the last four years by still-private venture-backed companies include FanDuel‘s acquisition of AlphaDraft and Unikrn‘s acquisitions of DotaProHub and Pinions. 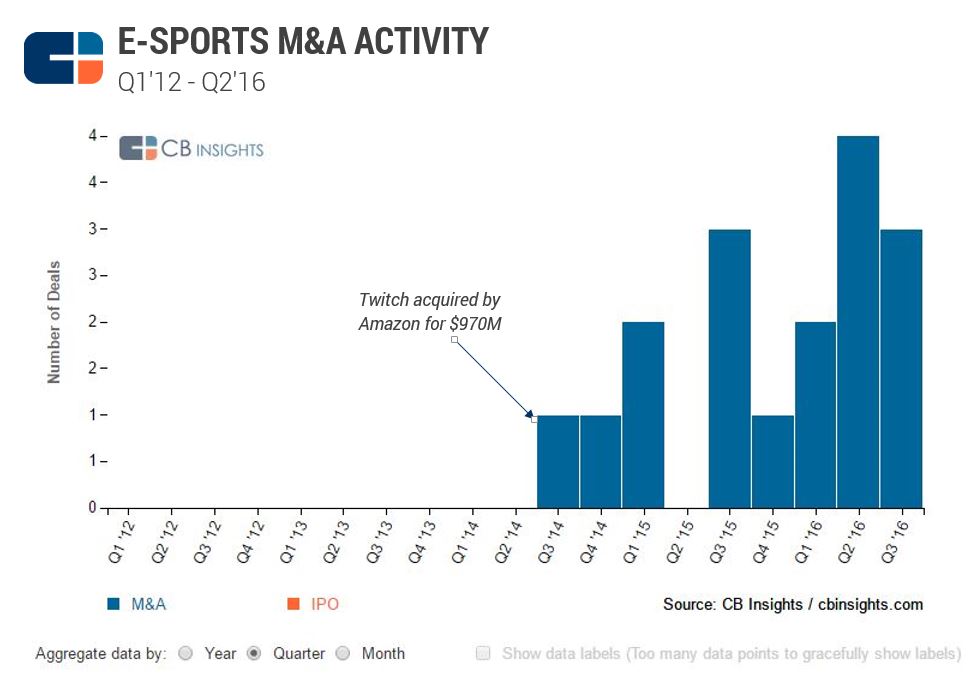 When we break down where M&A activity has gone within e-sports, we see deals spread among several key categories below. Acquirers are in paranthesis:

Content news & analysis: In this category, Australia-based e-sports news and coverage website Gamurs has made several small acquisitions in 2016 year-to-date including of news and analysis sites eSports Guru and eSports Nation.

Social/community: There have been a handful of acquisitions for e-sports social networks such as SocialNat or tools to enable competitive gaming communities such as Unikrn’s early acquisition of Pinion.

Fantasy/betting: Since the start of last year, the fantasy/betting e-sports category has seen Sequoia Capital-backed Vulcun pivot to live broadcasting tool TwitchAlerts and AlphaDraft acquired by FanDuel in September 2015.

Analytics: In the category of game and viewership analytics platforms, one early acquisition in the space was Unikrn’s purchase of Dota (a game called Defense of the Ancients) statistics startup DotaProHub.

Communication: Twitch recently acquired Curse Voice, a company providing chat and voice communication for gamers. Curse was backed by Tencent’s Riot Games. Tencent is also an investor in voice and text chat app Discord, which has raised more than $28M from investors including Benchmark and Greylock Partners. 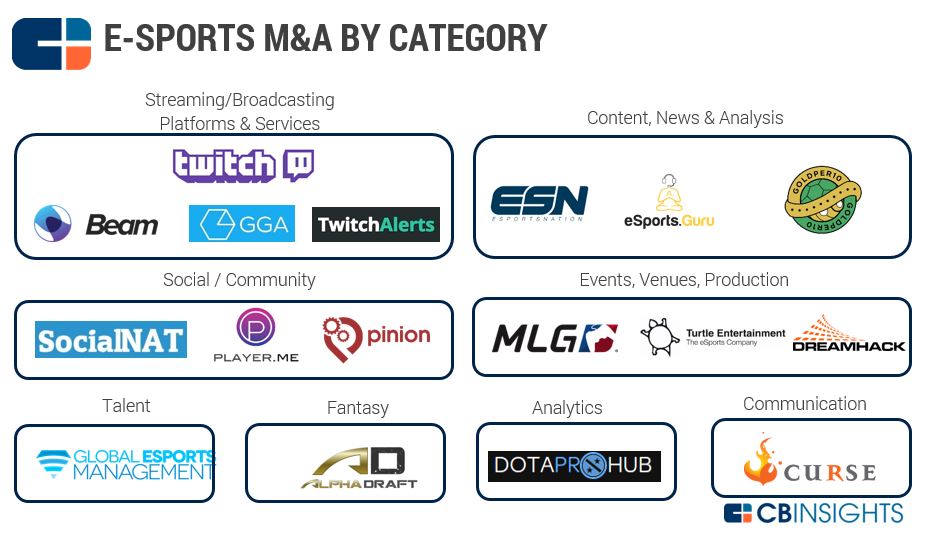