Investors have cooled on e-commerce so far this year, as deal count continued to slide further in Q3’16. We did see a funding bump last quarter due to several major deals, but more significantly, quarterly deal activity fell to the lowest level since late 2012.

However, funding dollars increased 38% to $2.2B in Q3’16, from $1.6B the prior quarter. Funding growth was driven by a large $449M Series F round to Beijing-based online electronics retailer Qufenqi — a deal more than $100M larger than the largest deal in Q2 (a $340M corporate minority round into apparel conglomerate Global Fashion Group in April). Beijing was also home to the second-largest deal in Q3’16, a $195M Series B to consumer goods shopping platform HuiMin. Online car dealership Carvana earned the third-largest deal with a $160M Series C. Based in Phoenix, Arizona, Carvana is now the city’s most well-funded internet startup, having raised $335M in total. 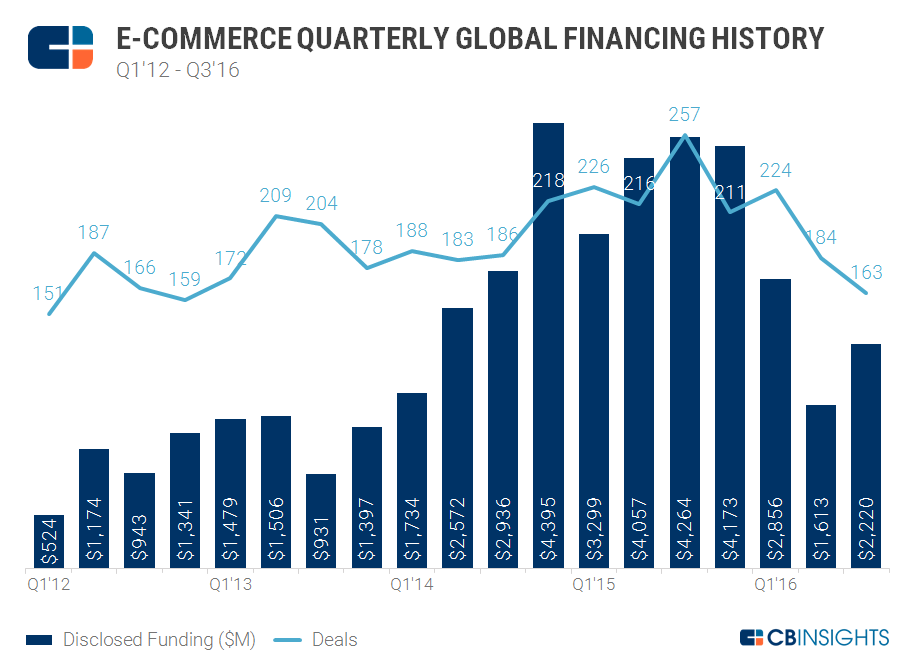 If e-commerce startup investment continues at its current rate, the sector is on track to see dramatic declines in both deal count and funding dollars this year. 2016 to date (through 10/17/16) saw $6.8B invested into e-commerce across 594 deals, a run-rate that would put the full year total at a bit above $8.5B and 740 deals. This drop would leave both deals and dollars below 2014 levels.

E-commerce deals and funding peaked last year with 910 deals worth a collective disclosed $15.8B. In 2015, a number of broad global e-commerce platforms raised funding, boosting the year’s total — we saw a whopping 33 $100M+ mega-rounds last year, including seven deals worth $500M or more. Group-buying and broad e-commerce platform China Internet Plus raised last year’s largest deal with a $2.8B growth equity investment. Also in 2015, South Korean platform Coupang raised $1B from SoftBank Group, Indian Amazon competitor Flipkart raised a $550M Series I, and the US-based Jet.com (acquired this year by Walmart) raised $500M, among others.

China Internet Plus raised 2016’s largest round so far with its $500M growth equity round in Q1. This is followed by the $449M Series F to Qufenqi, the $340M corporate minority investment into Global Fashion Group, and a $275M private equity investment into Middle Eastern online shopping platform Souq.com. UK investment management firm Baillie Gifford & Co. participated in both growth equity deals to China Internet Plus and to Souq.com. 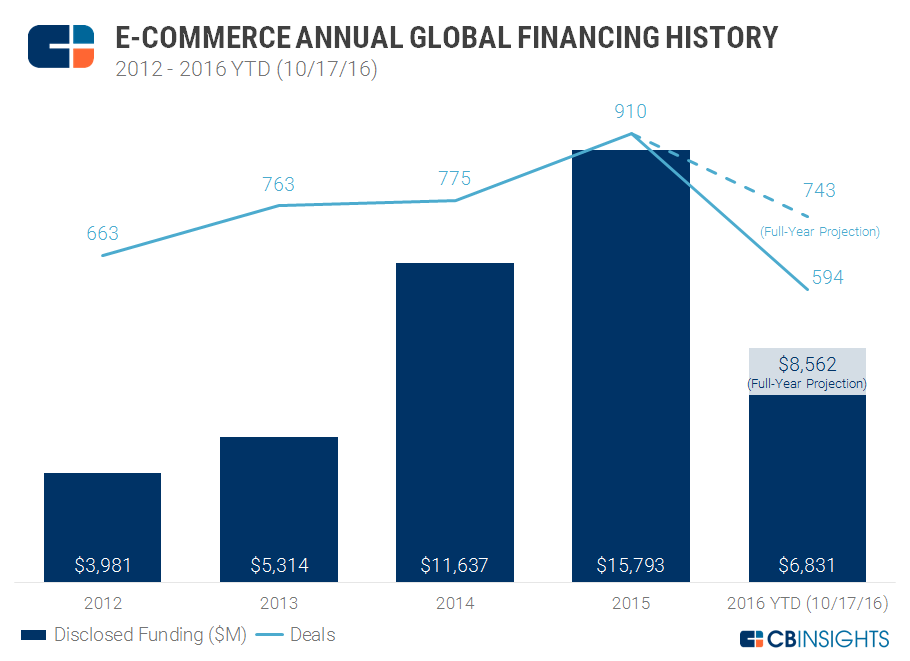 Want more data on e-commerce startups and investors? Log in to CB Insights or sign up for free below.