Research Brief
4441
There have already been two $1B+ deals in the e-commerce sector in 2017, including a $1.4B Series J to India-based Flipkart.

Deals to e-commerce startups increased for the first time since Q1’16, reaching 190 deals in the first quarter of 2017. Funding also increased last quarter, more than doubling the $2.3B seen in Q4’16. The top three deals in Q1’17 to Flipkart, Koubei, and Uxin Pai accounted for 63% of total dollar funding during the quarter.

Using CB Insights data, we analyzed deal and dollar trends on an annual and quarterly basis to the global private e-commerce sector. We define the e-commerce category as internet and mobile startups that sell physical goods, not including food or services. We also include certain companies in e-commerce enablement that help create and set-up e-commerce platforms for retailers.

While a drop in deal count in 2016 put the full-year at its lowest level since 2013, 2017 has gotten off to a more active start. Based on the current run-rate, 2017 deal count to the e-commerce sector is expected to reach over 800 deals, which would make it the second most active year across the time period.

India-based e-commerce platform Flipkart raised the largest round so far this year, with a $1.4B Series J investment from Microsoft, eBay, and Tencent Holdings in Q1’17. The mega-round — also the company’s first $100M+ round since December 2015 — comes as a downround for Flipkart, whose valuation decreased from $16B to $11.6B (all downrounds can be tracked on the CB Insights Downround Tracker).

Chinese e-commerce platform Koubei, a joint venture between Alibaba Group and Ant Financial Services Group, followed in second place with a $1.1B private equity round in Q1’17, while Chinese used-car platform Uxin Pai placed third with its $500M private equity round during the same quarter. 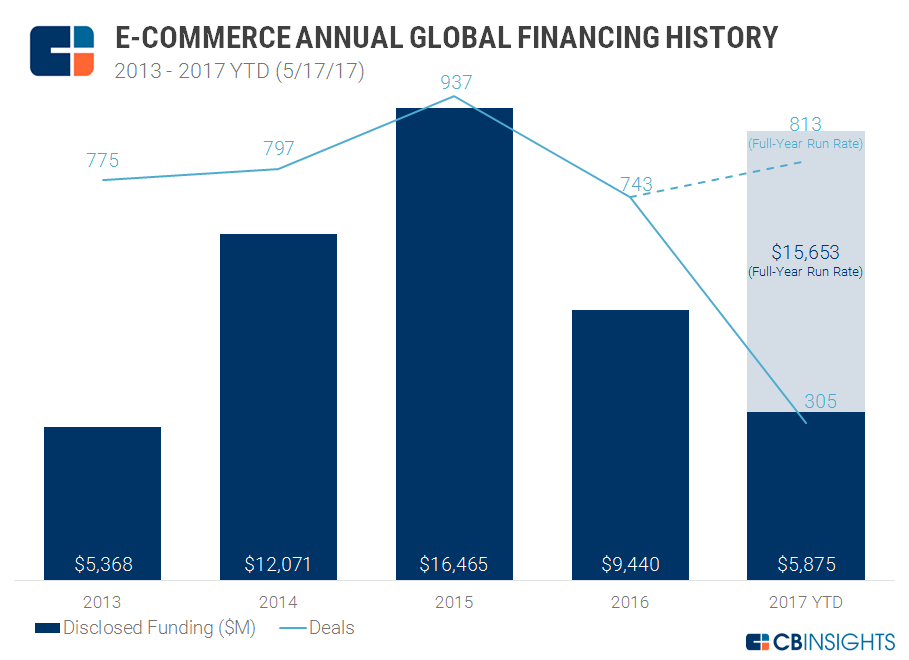 In Q1’17, e-commerce startups raised nearly $4.8B across 190 deals. Although well below the quarterly record of 264 deals in Q3’15, the number of deals rose 41% percent between Q4’16 and Q1’17. Funding also ticked up as a result of several mega-rounds, including the $1.4B Series J to Flipkart and the $1.1B private equity round to Koubei mentioned above.

Not included in the figures is Softbank Group’s recent $1.4B investment into One97 Communications this quarter (5/18/17). The round went towards One97’s core Paytm digital payments platform, which is now distinct from the spun-out Paytm E-Commerce. 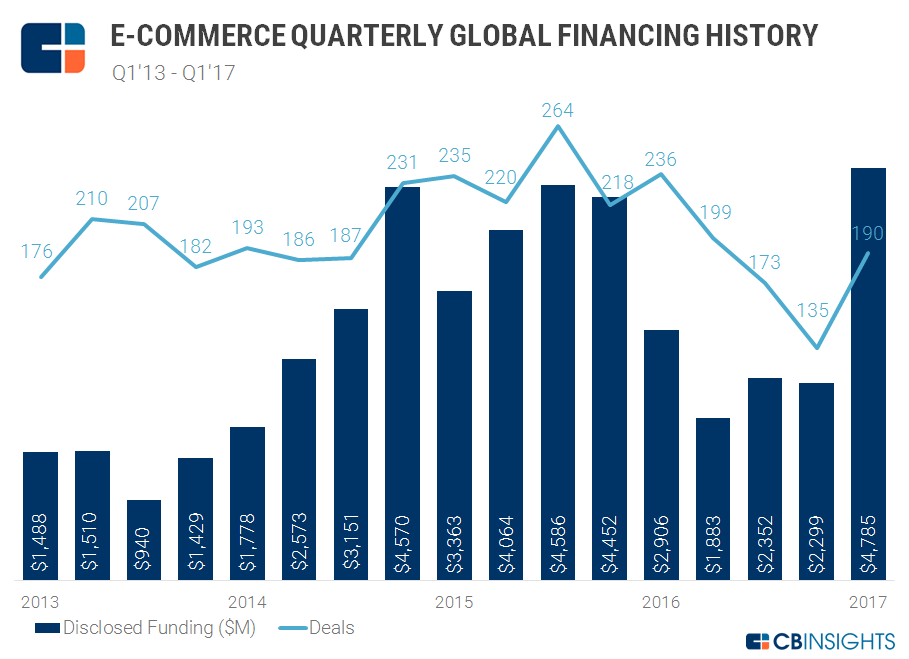 Want more data on e-commerce startup funding trends? Log in to CB Insights or sign up for free below.