Research Brief
2998
M&A activity for e-commerce startups beat the 40-deal mark for the eighth-consecutive quarter. There were a few notable international exits.

While just one e-commerce company has held an IPO so far this year, several well-funded companies exited through acquisitions in 2016. Some of these M&A exits were not good outcomes for the startups involved. This includes Gilt Groupe’s acquisition by Hudson’s Bay Company for just $250M, when Gilt had previously reached a valuation of $1B in 2011.

Another poor exit occurred last year, when Fab.com was acquired for a reported $15M in a down exit by design and manufacturing company PCH (Fab had previously been valued at $875M).

There have been large M&A exits as well on a global level. In just the last quarter, Spain-based Privalia was acquired by France-based Vente Privee for $560M. Alibaba Group paid $1B for Lazada in a deal that valued the Thailand-based company at $1.5B.

Annual e-commerce exits reached their highest point to date in 2015 with 192 M&A deals and 10 IPOs in that year.

This year to-date, the e-commerce sector globally saw just one IPO, for Australia-based Redbubble.com, an e-commerce platform for independent artists (the company now trades on the Australia Securities Exchange). In contrast, M&A activity is on track to outpace last year’s, with over 100 M&A exits in 2016 to-date. The current run-rate would imply a full-year total of over 200 M&A exits in 2016. 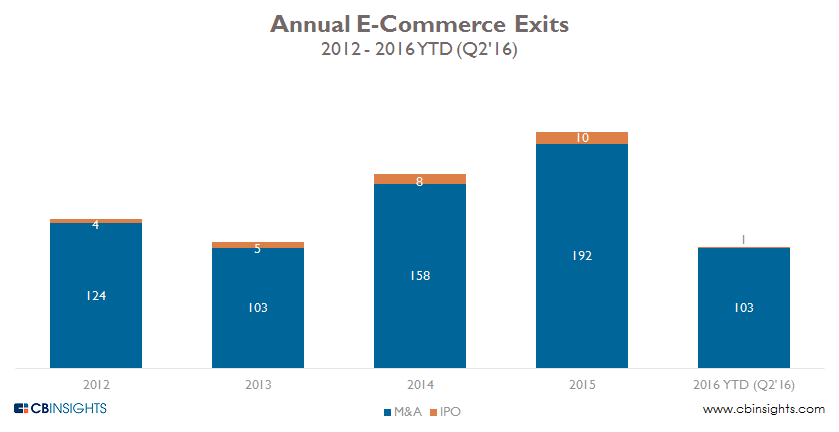 Q1’15 was the peak quarter for e-commerce exits, with nearly 60 M&A deals and 2 IPOs. Q1’16 ranks second and marked the third quarter in a row with an increase in M&A activity. M&A activity decreased in Q2’16, but remained above 40 deals for the eighth-consecutive quarter.

The largest M&A deal in Q2’16 was for the already-mentioned Lazada, a Bangkok-based e-commerce platform. Alibaba Group paid $500M for new shares and another $500M on the secondary market to acquire the company, in Alibaba’s largest overseas deal to date. The deal valued Lazada at $1.5B. 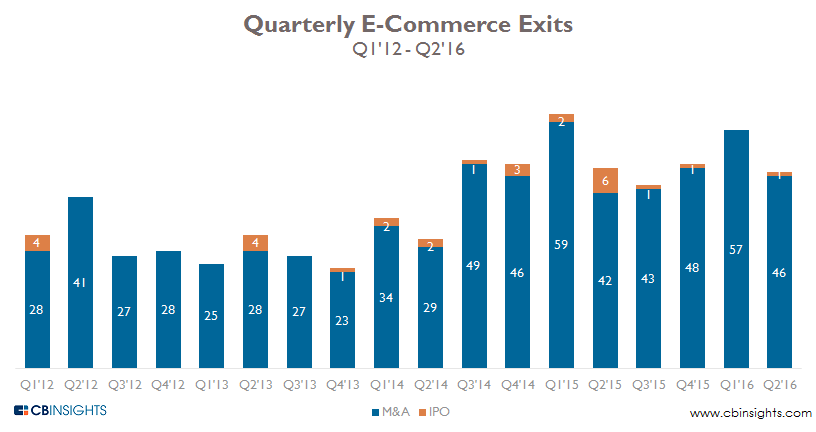 Based on disclosed funding, JD.com was the most well-funded VC-backed e-commerce exit in our time-frame. It is followed by Meituan, which was merged into new Chinese internet conglomerate China Internet Plus Holding, followed by Thailand-based Lazada, which we previously mentioned. Rounding out the top five are Wayfair, which launched its IPO in 2014, and Fab.com, which was acquired in the previously-mentioned down exit by design and manufacturing company PCH.

Based on valuation at time of exit, Alibaba ranked first as most highly valued VC-backed e-commerce exit in our time frame. These seven companies all exited at valuations over $2B+.

*Note: This analysis excludes second exits of companies that had previously exited between 2008 – present.

Want more data about e-commerce startup activity? Login to CB Insights or sign up for free below.