Over 750 private e-commerce companies have exited since 2012, and M&A and IPO activity saw annual increases each year from 2013 to 2015. However, last year saw a significant decline, in keeping with a decline in deals and dollars to private companies in the space. And so far, the pace of exits in the e-commerce space in 2017 hints at a continued slowdown of M&A and IPO activity within the category.

Using CB Insights data, we analyzed M&A and IPO activity since 2012 among private e-commerce companies (examining only first exits). We define the e-commerce category as internet and mobile startups that sell physical goods, not including perishable food or services.

While just one e-commerce company went public since the beginning of 2016, several well-funded companies were recently acquired. Some of these M&A exits were not favorable outcomes for the startups or pre-exit investors involved.

Most recently, Amazon announced its acquisition of Souq.com for a price reported to be under the startup’s $1B valuation. (As a note, this acquisition fell after the date of our chart analysis below.) Additionally, Gilt Groupe’s acquisition by Hudson’s Bay Company for just $250M in Q1’16 was significantly lower than the startup’s prior valuation of $1B in 2011. Yet another example of an unfavorable exit involved home goods e-commerce site One Kings Lane, which was acquired for only $11.8M in a down exit in Q2’16 by Bed Bath & Beyond, after previously being valued at over $900M.

On a brighter note, the prominent 2016 acquisitions of Jet.com and Dollar Shave Club have been positive signs for the e-commerce space. Jet.com was acquired by Walmart for $3.3B in Q3’16. Walmart paid a premium for the e-commerce startup, which was previously valued between $1B and $1.5B. Dollar Shave Club was acquired by Unilever for $1B in Q3’16. Additionally, there have been other large M&A exits as well on a global level. In Q2’16, Spain-based Privalia was acquired by France-based Vente Privee for $560M. In the same quarter, Alibaba Group paid $1B for a majority stake in Lazada in a deal that valued the Singapore-based company at $1.5B.

Annual e-commerce exits reached their highest annual total in 2015 with 191 M&A deals and 10 IPOs that year.

In 2016, the e-commerce sector globally saw just one IPO, for Australia-based Redbubble.com, an e-commerce platform for independent artists (the company now trades on the Australia Securities Exchange). Exhibiting a similar trend, e-commerce M&A activity declined substantially between 2015 and 2016, topping off at only 150 M&A exits in 2016. 2017 is also starting off slow with only 19 M&A deals since the beginning of the year through 03/22/17, and no IPOs. This would imply a run-rate of under 100 deals for 2017. 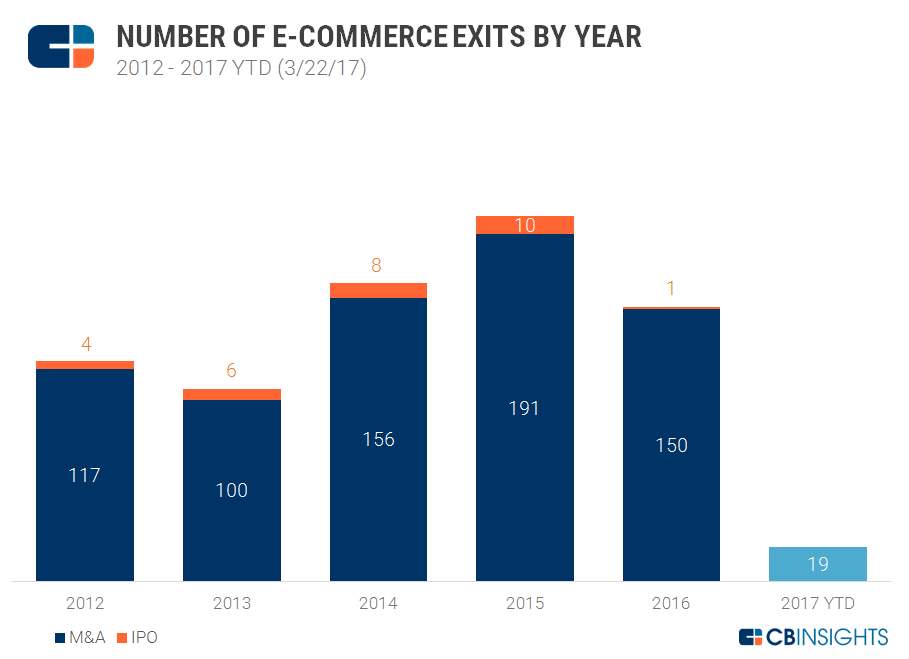 Q1’15 was the peak quarter for e-commerce exits, with 58 M&A deals and 1 IPO. Q2’15 ranked as the top quarter for IPOs, with 7 IPOs taking place during the period. Among M&A deals, activity significantly decreased in Q3’16, and the quarterly pace has yet to recover.

Notably, although M&A activity dropped off significantly in Q3’16 and Q4’16, several of the prominent deals mentioned above took place during this period, including the big-dollar acquisitions of Jet.com and Dollar Shave Club. The acquisition of LivingSocial by rival Groupon also took place in Q3’16. 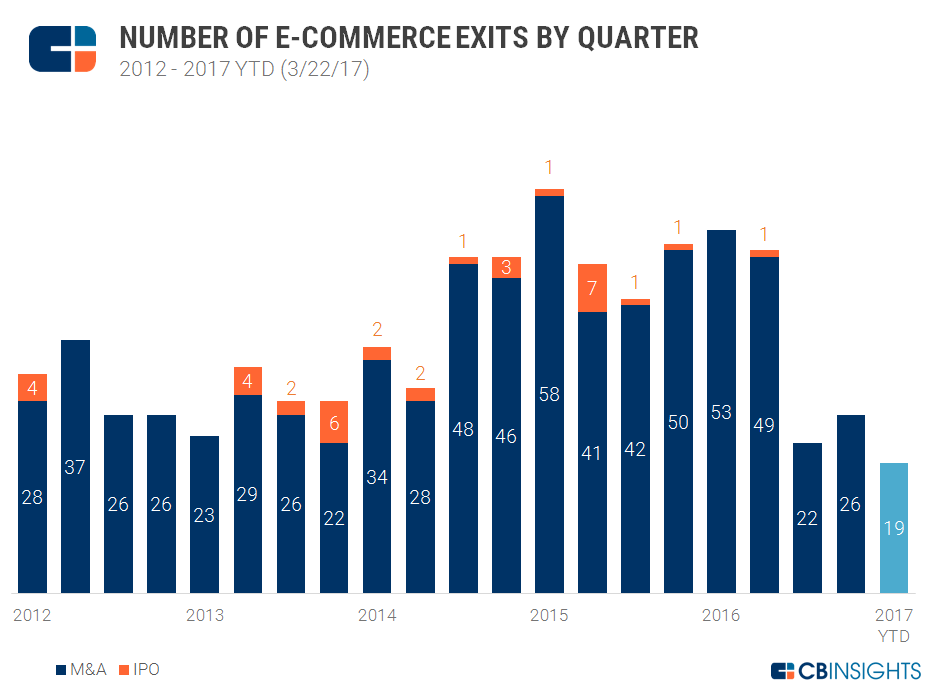 Based on disclosed funding, JD.com was the most well-funded VC-backed e-commerce exit since 2012. It is followed by Meituan, which was merged into new Chinese internet conglomerate China Internet Plus Holding, followed by LivingSocial which was acquired by Groupon, as previously mentioned. Rounding out the top five are Singapore-based Lazada, and Jet.com, also both previously mentioned. The top 5 most well-funded companies all had over $700M in financing at exit.

Based on valuation at time of exit, Alibaba ranked first as the most highly valued VC-backed e-commerce exit during the time period. The top 7 companies all exited at valuations over $2B+. It is worth noting that total funding often does not directly correlate with a company’s valuation. Such is the case with Russia-based Avito, which had only raised $168M, yet was acquired in a corporate majority deal for $2.7B by South African conglomerate Naspers.

Want more data about e-commerce startup activity? Log in to CB Insights or sign up for free below.