Amazon has patented a way for drones to provide "in-flight refuel" to vehicles — which might help resolve the charging-infrastructure challenge facing EVs.

As our vehicles become more automated and battery powered, we’ll spend less time at the fuel pump and less money on gas. But even electric cars — or bikes, or boats for that matter — can run out of juice, and charging stations aren’t widely available yet.

With a newly granted patent, Amazon could use the drones from its Prime Air fleet to keep you and your Tesla from getting stranded if you cruise too far out of town.

The e-commerce giant just won approval for an invention that would allow it to use its drone fleet to deliver energy to vehicles, both at rest and while they move — just like fighter jets refuel large aircraft in flight.

As electric vehicles (EVs) get cheaper, they’re growing increasingly appealing to American consumers: US sales of EVs were up 37% in 2016 compared to the year prior, according to data from InsideEVs.

At-home charging is often touted as a benefit for EVs over gasoline cars, but access to charging stations limits their mobility on longer trips: even the most energy-efficient EVs on the market can only go around 200 miles on a full charge, but the US has only around 16,000 public electric vehicle charging stations (compared to ~112,000 gas stations, as of 2015).

Those factors converge into a problematic scenario: Sales of EVs are accelerating so rapidly that sources like Bloomberg New Energy Finance have warned the US will hit an “infrastructure cap” in the mid-2030s due to a lack of charging stations.

With its new drone fuel-delivery patent, Amazon could help solve the charging problem for EV automakers … and potentially create a highly valuable product for the owners of the ~130,000 new EVs that hit the road last year.

Knowing that vehicle-power depletion “may result in an adverse user experience,” Amazon patented a way to deploy its drone fleet to rescue vehicles with draining energy reserves: US patent 9778653 details a method whereby “uncrewed autonomous vehicles,” or UAVs, can:

The patent envisions UAVs attaching to vehicles via a docking mechanism comprised of various connectors. The patent illustrations show the docking mechanism affixed to the roof of the vehicle, but the patent says the dock could be located elsewhere (such as on a door or trailer hitch).

As with most patents, the filing makes no mention of offering the drone-refueling invention as a saleable product, so it’s possible that this tech could be used exclusively inside Amazon’s logistics operation. Yet the patent also claims a wide variety of applications for the technology, signaling that Amazon recognizes the commercial potential for on-demand energy delivery.

For one, the patent makes clear that the drone-refueling concept is not limited to EVs, pointing out that UAVs could transfer many forms of energy — including traditional fuels — to any “mobile machine that uses energy to move from one location to another.” (In addition to cars and trucks, the patent notes that a UAV could be used to refuel a bus, motorcycle, boat, aircraft, or even another UAV.)

Charging electric cars, however, provides the clearest use case for the invention.

As detailed in the illustration below, the systems that manage and monitor an EV’s energy use (and reserves) would communicate with a server to request and receive energy. The vehicle’s system would determine whether the amount of energy stored in its rechargeable battery is sufficient to get the vehicle to its desired destination, and if not, the vehicle’s technology would send up an “energy request” to a server.

The server would then select a UAV from Amazon’s fleet (based on factors like UAV availability and location) and transmit instructions. It would meet up with the vehicle, and affix to it at the appropriate “rendezvous location.” The rendezvous location itself might be a moving target, since the vehicle would also be sending up information about its speed, route, and destination.

Once connected, the UAV would authenticate the vehicle’s energy request (both before and after docking) and transfer energy to keep the EV moving. The patent notes that the authentication process would “prevent or reduce theft of energy or UAVs.” 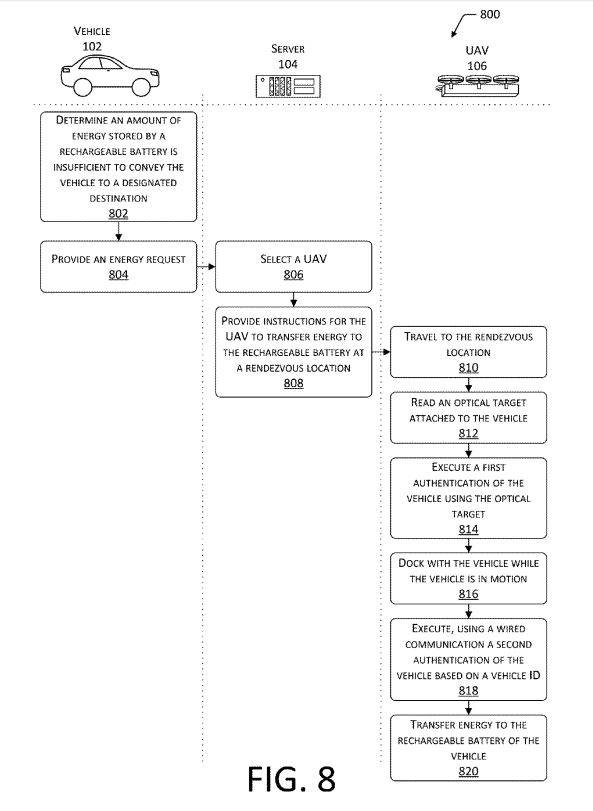 Additional use cases (that don’t exactly match the image above) are also noted in the patent. One of them involves a UAV-to-UAV rescue scenario, whereby “a first UAV may be stranded traveling through unexpected high winds,” at which point “a second UAV may be utilized to deliver energy to the stranded first UAV.”

That scenario, as well as the overall idea of UAV-EV-refueling, provides a way to make autonomous electric vehicles and drones even more useful for delivering supplies to combat zones, disaster sites, or rural areas.

Ultimately, these refueling drones could makes it more feasible for EVs to go pretty much anywhere — even locations where public charging stations can’t be found. It also creates many new commercial opportunities for Amazon’s Prime Air arm’s ever-growing drone fleet (a fleet poised to be housed in blimps, trains, underwater fulfillment centers, and death-star shaped warehouses.)

A drone-powered fuel offering from Amazon could feasibly be sold to EV owners, for example, or packaged as a service to new EV buyers at the dealership. Imagine an on-demand battery-charging subscription that meant you never had to plug in your Tesla at all — not even in your garage.

If such an Amazon charging service were available, it could prove highly valuable to the EV industry at large: the same report that found EVs will be cheaper than regular cars by 2025 noted that more “cooperative billing arrangements” for EV charging will help us “prepare for a future with longer-range EVs that drivers depend on to travel further.”