Over the last year, acquirers in the drone space included household names such as Boeing, Intel, Snap, and Verizon.

Drones companies continue to see increased investor interest, with 2016 setting another annual deals record. Likewise, deals in Q1’17 hit an all-time quarterly high, up 10% from the previous quarterly deal high. Increased investment activity is occurring just as drone startups are starting to see an increase in exit activity through M&As and IPOs. Fourteen drone startups exited in 2016 via thirteen M&A deals and one IPO, more than all exits from 2012 through 2015 combined.

2017 looks like it could shape up to see historic exit activity in the space as well. So far this year through 6/28/17, eight drone startups have exited via seven M&As and one IPO. Aquabotix went public in April. Before Aquabotix’s IPO, it had only raised $2.09M in total disclosed funding.

Looking at exit activity between 2016 through 2017 YTD, companies across the spectrum scooped up drone startups. Some well known corporate behemoths acquired companies in the space, including Intel (acquired MaVinci) and Boeing (acquired Liquid Robotics), as well as Verizon (acquired Skyward) and Snap, Inc (acquired Ctrl Me Robotics). In addition, private companies such as Airware and 5D Robotics were also active acquirers in 2016, acquiring Redbird and Aerial MOB, respectively.

Using CB Insights’ data, we analyzed exits in the drones space over the last five and a half years and created a timeline of activity spanning from Q1’12 through 2017 YTD (6/28/2017). One notable trend among acquirers has been their tendency to buy up drone startups with little to no funding. The main exception being Liquid Robotics, which raised $82.1M prior to acquisition in December 2016.

Drone startup exits have been trending upward since 2013. Exit activity peaked in 2016, at fourteen total. 2017 is currently on pace to exceed the total number of exits from the year prior. The three drone companies that have gone public since 2012 are drone manufacturer Delta Drone (June 2013), drone detection company Droneshield (June 2016), and marine drone company Aquabotix (April 2017).

The acquisition of Liquid Robotics in 2016 remains the most well-funded drone company to exit. Rounding out the top three are Droneshield and Skyward. Droneshield’s IPO last year valued the company at $27M, according to CB Insights’ data, slightly more than their $26.2M in disclosed funding. 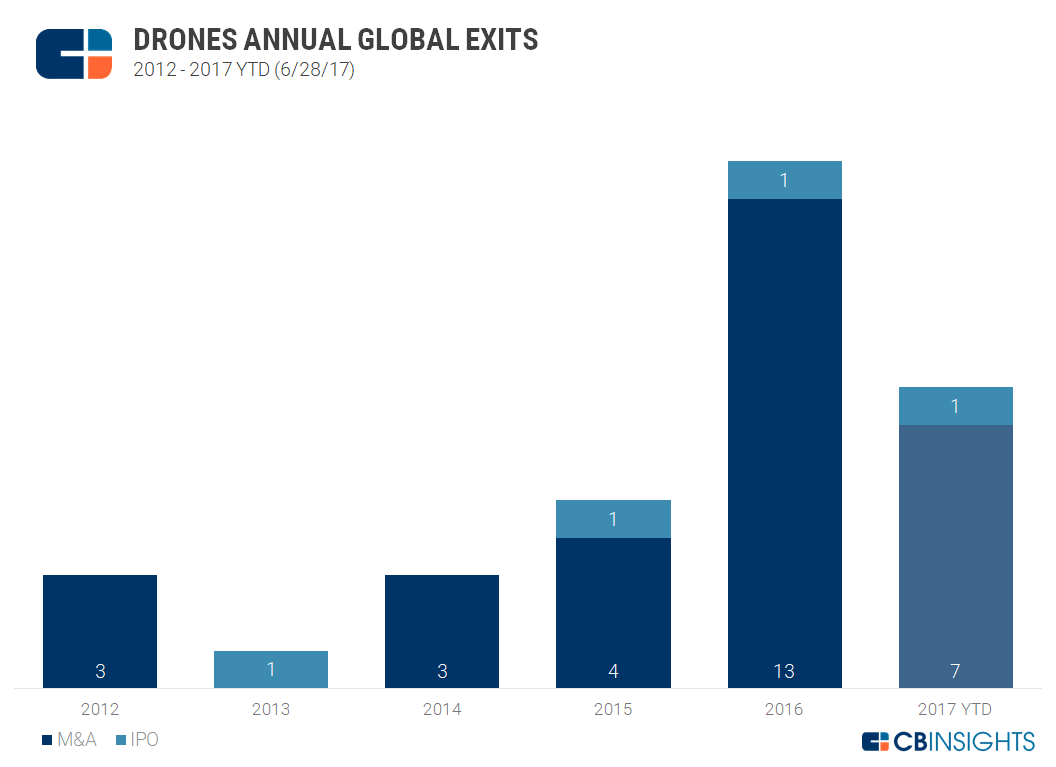 Drone startups are reshaping the ways we collect data, transport goods, and protect our property. Look for Drones in the Collections tab.

Since Q1 2012, there have been 34 exits within the drone space, with 24 of those just over the last two years. While there seemed to be a focus primarily on acquiring drone manufacturers and autonomous solution companies early on, there is now growing diversity among drone acquisitions across common drones categories, from terrestrial imagery & mapping to industrial inspection & monitoring.

Notable drone manufacturer and autonomous solution acquisitions include: Titan Aerospace (acquired by Google in April 2014), KMel Robotics (acquired by Qualcomm in February 2015), and Ascending Technologies (acquired by Intel in January 2016). Notably, Amazon, one of the highest-profile corporates working on delivery drones, is absent from the list of acquirers. However since the company’s announcement of plans for delivery drones in late 2013, there has been a significant uptick in overall acquisition activity.

Since that time, there has been a flurry of acquisitions from other companies looking to leverage drone technology for industry-specific purposes, including: Redbird (industrial inspection – acquired by Airware in September 2016), Prox Dynamics (military & defense – acquired by FLIR in November 2016), and Ctrl Me Robotics (entertainment – acquired by Snap in May 2017).

Want more data about top drone companies? Log in to CB Insights or sign up for free below.