Research Brief
1640
Funding to drone startups increased 104% as venture firms including Lightspeed Venture Partners, GGV Capital and Kleiner Perkins among others jumped into the space with sizable bets.

According to CB Insights data, investment in 2014 to the nascent drone industry topped $108M across 29 deals. Year-over-year funding increased 104% as venture firms including Lightspeed Venture Partners, GGV Capital and Kleiner Perkins Caufield & Byers among others jumped into the drone space with sizable bets.

(Note: The charts below are screenshots directly taken from CB Insights Industry Analytics. No Excel required.)

Between 2010 and 2012, there were fewer than five VC deals to drone companies. But as hype and interest catalyzed for the space (Amazon famously revealed plans for drone delivery in December 2013), investment has grown. There are now at least 10 drone companies with Series A funding or later including Ehang, Skycatch and Kespry. A handful of companies have raised Series B financing including 3D Robotics and Airware.

The chart below highlights deal activity in the drone space by stage over the last five years. To date, venture investment has not touched the late-stage (Series D+) in the drone space yet which is primarily a function of the industry’s relative immaturity.

The most well-funded drone companies

Of the current crop of drone startups, Airware is the most well-funded having raised $40M from firms including First Round Capital, Andreessen Horowitz and Felicis Ventures in addition to a strategic investment from GE Ventures. 3D Robotics is a close second, having raised $35M from investors including True Ventures, O’Reilly AlphaTech Ventures and Mayfield Fund. A compilation of the top 5 most well-funded private drone startups is below: 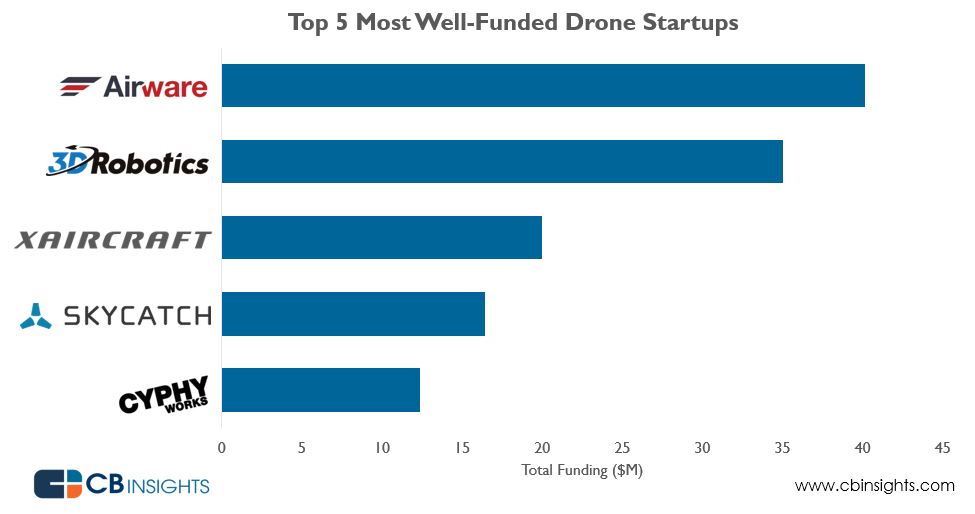 Update: Bilal Zuberi at Lux Capital published this nice Investor’s Perspective on the Proposed Drone Regulations over the weekend, after the FAA published its regulatory framework.

Want to track emerging drone companies and their investors? Sign up for the CB Insights Venture Capital Database free below.