Research Brief
2690
Corporate investment in drones climbed to a record high last year, but deals and funding plunged in Q1'16.

Corporations and their corporate venture arms — including chip makers Intel and Qualcomm — have become increasingly active in drone startup investment. Just four years ago in 2012, there was just 1 deal to drone startups involving corporates, whereas in 2015 there were 17.

Despite this enormous growth in activity, when overall funding and deals to drone startups tapered in Q1’16, so did corporate involvement. Only one deal involving a corporate occurred this past quarter: Sky-Future‘s $5.7M Series A, which involved Airware’s Commercial Drone Fund and an investment from helicopter transport-focused corporation, Bristow Group.

We used CB Insights data to see funding trends involving corporates, their activity by deal stage, and identified the most active players in the investment space. 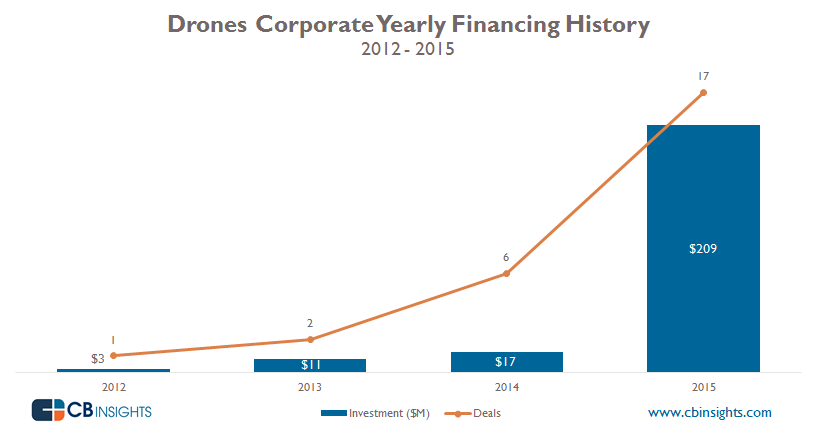 Looking at the quarterly investment trends brings the rise and fall of corporate investment into clearer focus. This past quarter saw only one deal compared to seven the quarter prior, including sizable corporate-backed rounds such as Cyphy Works‘ $22M Series B and Swift Navigation‘s $11M Series A.

Q1’16 saw an especially steep decline in corporate activity. Deals plummeted from 7 to just one (the lowest deal count since Q3’14), and investment totaled just $6M compared to $50M the quarter prior, marking a 88% fall in funding quarter-over-quarter. 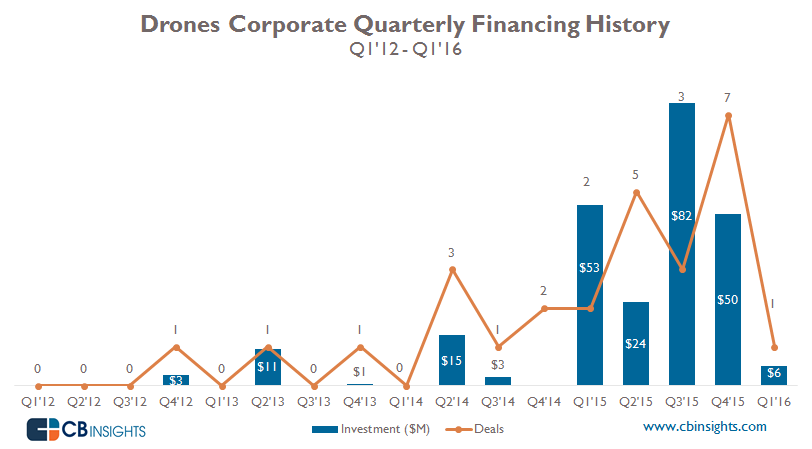 As is the case in overall drone investment, drone financings involving corporates skew heavily toward the early stages. More than two-thirds of corporate deals over the past five quarters were at the seed or Series A stages. Mid-stage deals accounted for 28% of share. And because it’s still a very new area for investment, there weren’t any late-stage deals involving corporates in the year. 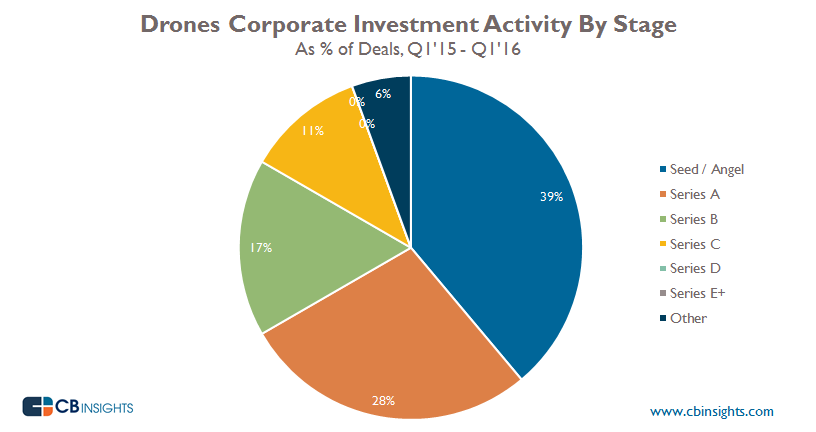 Most active corporates investing in drones

Topping the list of most active corporates was Qualcomm Ventures. Given their position among the most active investors within the broad IoT category (in which we include drones), it comes as little surprise they are also active here.

Intel Capital, the most active investor in the broader IoT category, was also active in drones. Intel’s recent investments include deals to Yuneec and Airware.

And also tied for second was Google Ventures, which most recently invested in the $3M seed round to Hivemapper, a mapping tool that has been compared to a “Waze for drones.”

See the full rankings below:

Want more data about drone and UAV companies? Log in to CB Insights, or sign up below.