In this guest post, a drone software entrepreneur explains the potential of drone technology to change the property insurance industry.

The following is a guest post authored by David Pitman (@edavepitman), co-founder of Converge (@converge_co). Views are his own.

I was told Fred was the man to talk to about inspecting buildings. “Everyone uses Fred. But I don’t know that he’s ever used email,” my reference said, advising that I call his phone. Surprisingly though, Fred has a website. The sole image on the site shows him standing on a roof in a ten-gallon hat staring jauntily down at the steep angle.

When I called Fred to ask about his experiences inspecting buildings, three things became immediately apparent. First, you need a lot of knowledge to inspect buildings. Not only does Fred have a Civil Engineering degree and an MBA, he can also breezily discuss the intricacies of property losses in a way that makes you realize how much expertise goes into an inspection. Cracks in a roof are not just cracks; he’s looking for “patterns telegraphing through the membrane of the joints of the installation board” that tell him there is likely water damage. Likewise, claims adjusters I’ve spoken to describe how hail damage is not simply dents in a roof: they’re “divots that spread out like rocks hitting sand and break up the protective granules on the face of a shingle”.

Second, there is great bodily risk involved in Fred’s job. This is the dangerous underbelly of property inspection, where claims adjusters (and underwriters) are climbing up ladders, walking on roofs, and tiptoeing through burned out buildings, all to take a few photos that justify the assessment in their report. The National Institute of Safety and Health routinely ranks being on a ladder or roof as one of the most hazardous tasks in the US.

Third, the time required for someone like Fred to inspect a building’s exterior is staggering. Inspecting a house for an insurance claim can take one to two hours. The Insurance Information Institute estimates that approximately seven million homes every year have claims related to property damage.  A modest office building can easily take four times as long to inspect. 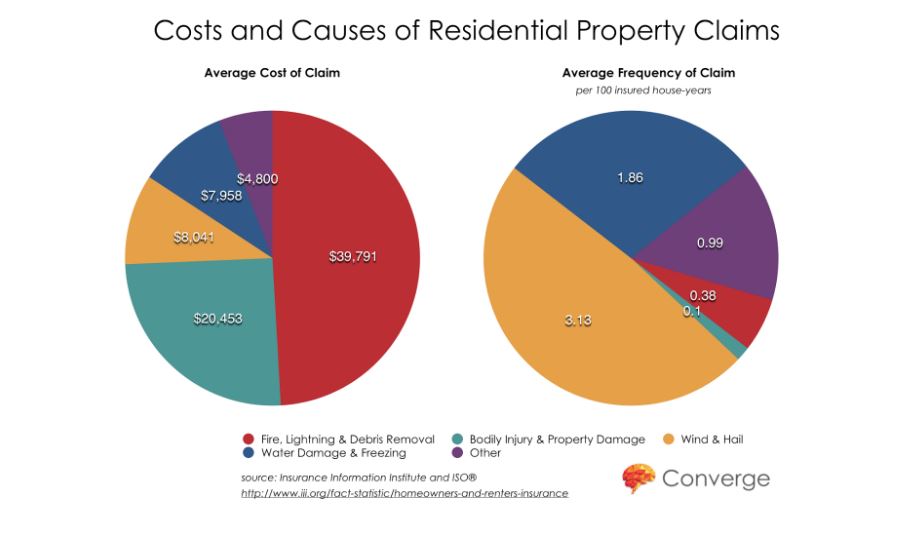 Until now, inspecting this damage has been done hands-on, as adjusters get up close to take photos and video that document a loss. Last week, however, the US Federal Aviation Administration has released new rules which will allow the insurance industry to begin widely using drones.

To date, insurance companies have had to petition the FAA for permission to use drones. This petition, known as a Section 333 exemption, required extensive legal resources, alongside consulting drone experts to prepare operations and safety manuals that were hundreds of pages long. This was a long process, with many companies waiting six months or more for approval, and the rules these companies had to abide by were onerous and complex. Operations had to take place more than five hundred feet away from the general public and the drones could only be flown by those with a pilot’s license. 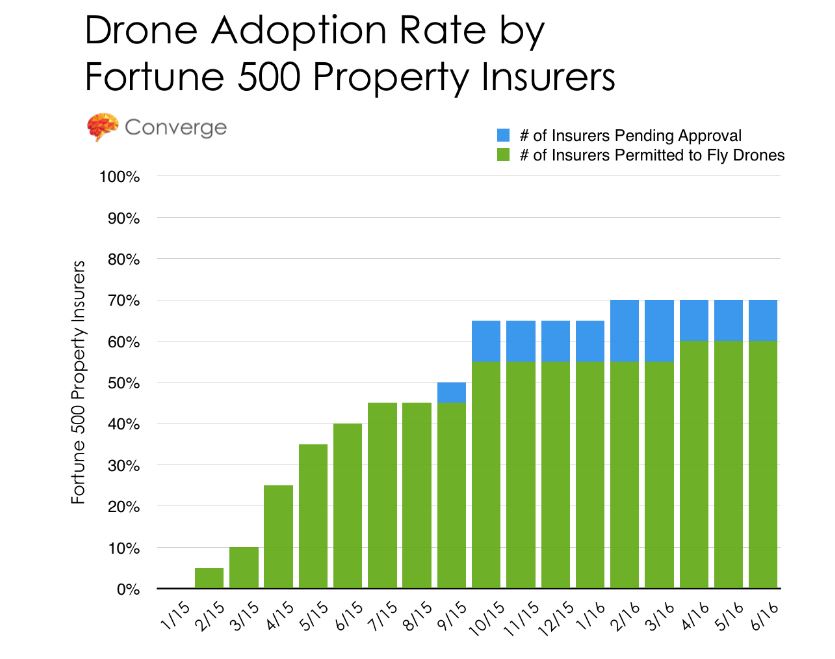 Yet, even with those barriers in place, 70% of the Fortune 500 P&C carriers undertook this process so they could start using drones right away. Using data over the past 18 months, more than 80% of companies who have received drones for inspections are pursuing using cheaper drone hardware that they can deploy at scale in their businesses. When over half of the leaders in a market begin using a new technology, it’s no longer a question of if, but how this technology will change the industry.

How Drones Are Changing Property Insurance

Using a drone to inspect a building after a loss is not only safer, with the claims adjuster keeping both feet firmly on the ground, but also much more efficient. Using a drone, adjusters and underwriters can obtain the information they need and are usually 10 times faster than before. 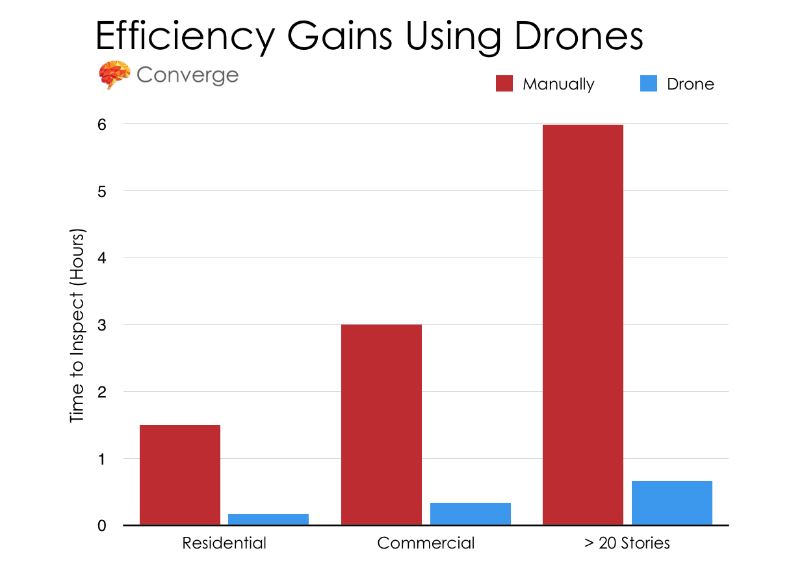 These efficiency gains translate to real revenue for insurers. A JD Power study found that length of time spent in each stage of processing a homeowner’s claim (cycle time) was the single most important metric that drove customers to stay with their existing carrier or seek a new one. By lowering the time to inspect a loss, and the number of losses an insurer can process in a day after a major event, drones directly impact the speed with which customers are able to receive settlements. The efficiency of performing inspections with drones also leads to entirely new practices that can help insurers with calculating premiums and risk mitigation. In the future, it’s entirely possible that insurers will preemptively inspect insured properties before a hurricane or at the start of hail season.

With a drone, data and photos, such as the one below, can be collected that were never possible before: a video of the corner of a building from five stories up, a mosaic photo of an entire roof, and close-ups focused on the sheer sides of a skyscraper. The flexibility of drones also allows for the use of more sophisticated sensors, such as thermal (IR) cameras, which are useful for detecting water damage, or laser measuring units (LIDAR) that can provide detailed models of a building or the slope of a property for drainage during flood scenarios. 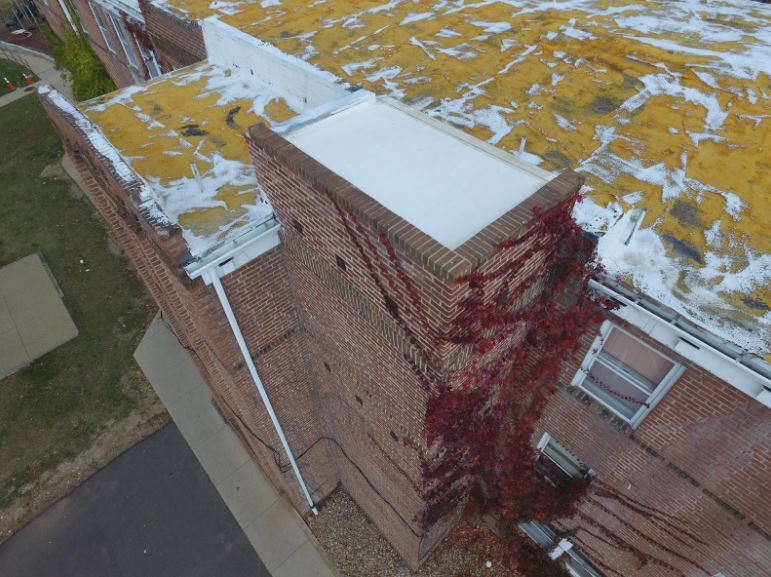 Drones also present a way for insurers to start building large, usable sets of data for their risk modeling and loss estimation tools. Machine learning will automate many laborious tasks in claims assessment, like counting the number of shingles missing on a roof, or a determining if a brick facade is at risk of crumbling.

Last week, the FAA announced new rules, known as Part 107, for businesses using drones. Starting August 29th, any claims adjuster or underwriter will be able to use a drone to perform inspections after only taking a written exam, similar to a driver’s ed test, on safely flying drones.

Will we suddenly see drones over the skies of every property loss starting in September? No. But the question has now become how drones will be incorporated in P&C carriers’ tool kits for evaluating properties and losses. These new regulations will usher in a new era for the insurance industry, making it safer and faster to inspect buildings using drones.

In the future, Fred will no longer need to climb up a ladder and scramble across a roof to perform an inspection. Instead, he will be able to conduct detailed inspections, ten times faster than before, all while safely standing on the ground. These efficiency gains, combined with new data, like IR or 3D models, that is analyzed by machine learning algorithms, will dramatically help the industry in pursuing the goal of delivering a better experience through all stages of working with the insured: from more accurate premiums and risk mitigation, to faster claims processing.

David is a co-founder of Converge, a Techstars company focused on making it effortless for insurers to use drones to inspect buildings. Prior to co-founding Converge, David was a research scientist at MIT, where he focused on human-computer interaction, and has a BS/MEng from MIT in Computer Science.