Research Brief
2662
Downround activity has shot up in recent quarters, eclipsing the new unicorn count in the last two quarters.

Throughout the first three quarters of 2015, private companies saw record levels of funding as investors from VCs to hedge funds and mutual funds rushed to finance the next new $1B+ private company unicorn.

However, starting in Q4’15 headwinds have grown strong, with increasingly negative headlines revealing layoffs and scandals, valuation markdowns, as well as uncertainty in public technology markets and Asia’s major economies. As challenges mount, unicorn births have given way to a rash of downrounds and down exits.

Using data from the CB Insights Downround Tracker and the KPMG International & CB Insights Venture Pulse Report, we compared trends in new VC-backed unicorn creation against downround activity among VC-backed startups (including “down exits,” in which a company exits for less than its last previously disclosed private market valuation).

This analysis includes only verified downrounds and down exits for companies that have received VC investment, and excludes any rumored or unconfirmed events.

As noted in our breakdown of Q1’16 mega-round and unicorn birth activity, the number of new VC-backed companies joining the ranks of the $1B+ valuation club has fallen off sharply across the past 2 quarters. In Q1’16, just five new unicorns were minted, including travel company Skyscanner and Japan-based Mercari.

Over the same period, downrounds have risen sharply, eclipsing the new unicorn count in both Q4’15 and Q1’16.

The first quarter of 2016 in particular saw several downrounds as well as down exits involving notable VC-backed names. Both Jawbone and Foursquare saw their valuations cut by more than half in January downrounds. Meanwhile, Hudson’s Bay Company acquired former unicorn Gilt Groupe for $250M, less than the $284M in capital that Gilt had raised. 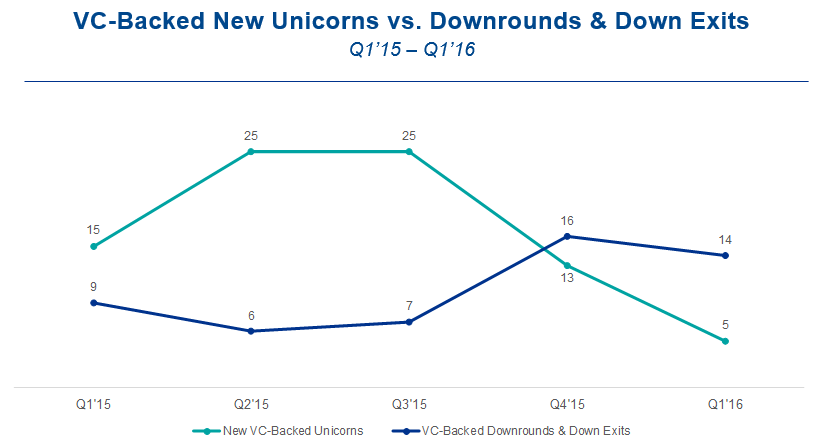