Beyond Unilever's $1B acquisition of Dollar Shave Club, dozens of direct-to-consumer apparel and accessories startups are reshaping commerce.

Since 2012, investors have poured nearly $2.5B into direct-to-consumer brands, which design and sell apparel, accessories, and more directly to consumers through their own online channels.

Legacy corporations are starting to pay attention — in July, Unilever paid $1B to acquire direct-to-consumer razor brand Dollar Shave Club, adding the online-only seller to Unilever’s stable of grooming brands, most of which sell through drugstores and other retail outlets.

The buzz for D2C grows

While many of the July articles focused on Dollar Shave Club itself, or on finding the next Dollar Shave Club, a wider range of startups also drove the continued growth. Hong Kong-based apparel startup Grana, for example, was the focus of many articles in October after its $10M Series A.

Startups working on direct-to-consumer products have the potential to upend the industry. Sign up for a free trial and look for D2C Startups in the Collections tab.

2015 saw the two largest-ever direct-to-consumer funding deals, which helped push up funding totals that year. In April, T. Rowe Price led a $100M Series D to industry leader Warby Parker, which valued the company at $1.2B, and increased total company funding to $216M. Warby Parker aimed to use the round in part to expand its physical store footprint. Later that year, home care CPG company The Honest Company raised a $100M Series D at a $1.64B valuation.

So far this year, direct-to-consumer funding rounds have been far smaller. Custom menswear startup Indochino raised 2016’s largest deal to date, with a $32M Series C investment from Dayang Group. While the funding drop appears dramatic, deal count is on track to fall much less dramatically this year, so the dollar differential is mainly due to those major funding rounds that boosted the total last year. The median deal size has held steady from 2015 to 2016 at $3M. 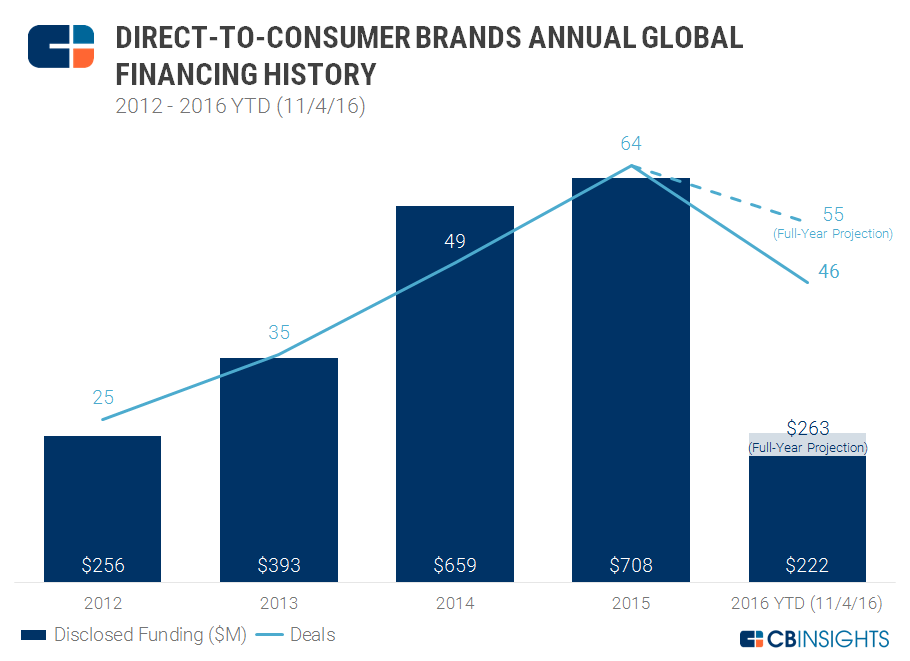 The infographic below highlights dozens of direct-to-consumer startups targeting the apparel and accessories markets. We see new entrants in verticals that are dominated by large, traditional players. While Dollar Shave Club was acquired by Unilever, Harry’s and Walker and Company represent new, private competitors in the razor space. Startups such as ThirdLove and Lively are also aiming to chip away at Victoria’s Secret’s lingerie leadership, while Warby Parker, of course, has been taking aim at Luxottica. 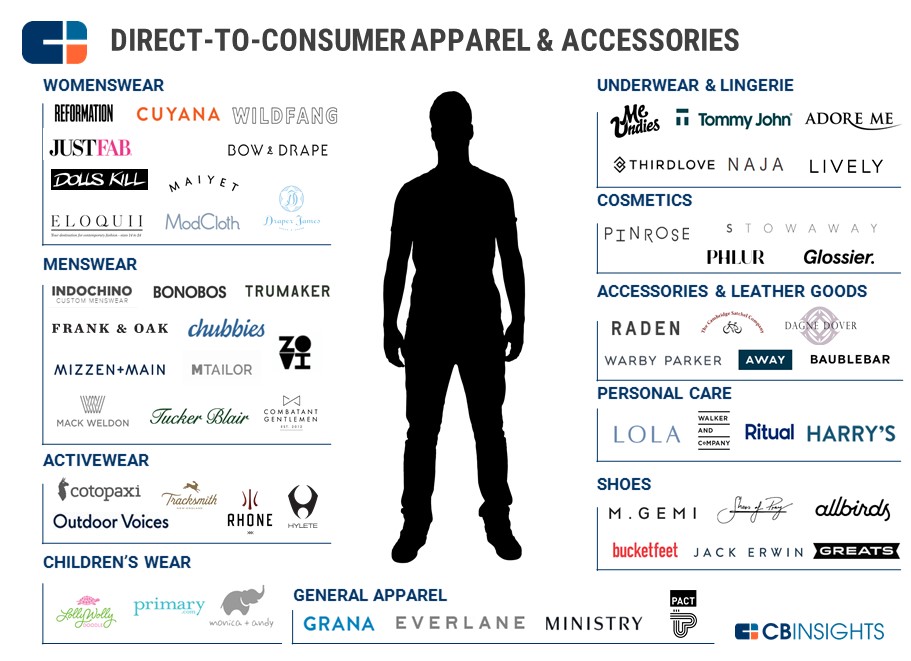 Want more data on e-commerce startups and financing trends? Log in to CB Insights or sign up for free below.