Despite a large deal activity discrepancy, biotech funding actually topped digital health funding in 2015, as biotech firms raised over $6B, a multi-year high.

Digital health startups continued to outpace biotech deal activity, with digital health reaching an all-time high of 891 deals in 2015, thanks to early-stage activity. The biotech space, meanwhile, saw 473 deals. That’s an advantage of 418 deals for digital health (or 88% more deals).

Overall digital health deals grew 21% in 2015 versus 2014, while biotech was range-bound with just 2 more deals versus the previous year. 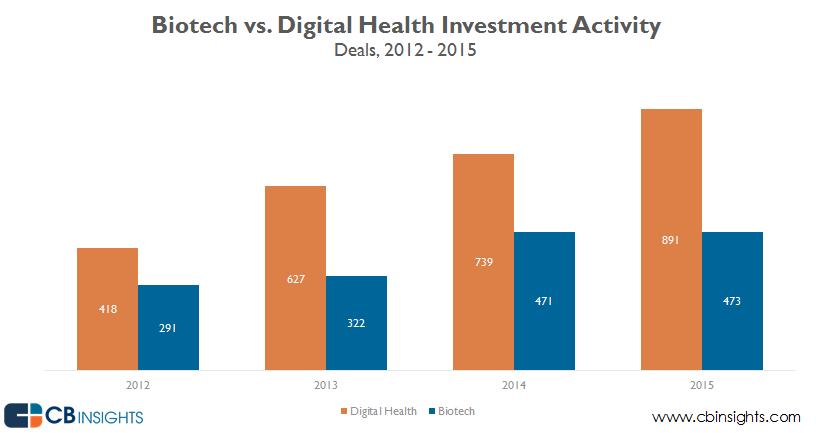 Despite the large deal activity discrepancy, biotech funding actually topped digital health funding in 2015, as biotech firms raised over $6B, a multi-year high. Overall there were over 6 $100M+ equity financings in biotech, including two giant Series As: a $320M Series A financing to Immunocore, in addition to a $217M Series A financing to Denali Therapeutics.

Digital health was just narrowly edged out in funding. However, the sector continues to garner large deals in its own right. Mega-rounds to digital health companies in 2015 included a $394M Series D to Guahao Technologies, a $200M corporate minority investment into NantHealth, as well as $100M+ financings for unicorns Oscar Health, ZocDoc, and 23andMe. 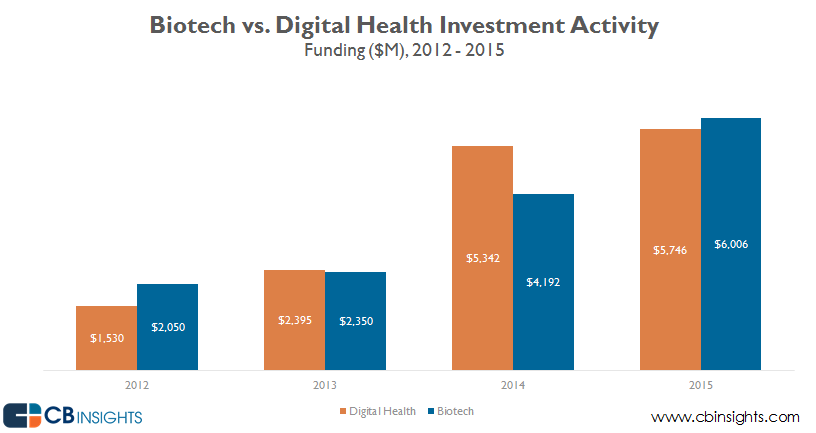 Want more investment data on biotech or digital health? Login to CB Insights or sign up for free below.