With products ranging from ingestible sensors to track medication intake to practice management solutions, startups continue to innovate within the digital health space. And as the ecosystem grows, funding is keeping up. Global funding to the industry reached over $3.5B in the first half of 2016, on track for a record high this year.

As the digital health sector has expanded, geographic funding trends have begun to shift. While Silicon Valley has led the group in funding every year since 2012, NYC has recently overtaken the tech hub with over $800M invested so far in 2016. In this brief we look at funding trends to digital health startups in the greater metro areas of Silicon Valley, NYC, and Boston.

Our analysis focuses on the following areas:

While Silicon Valley has led digital health investment for the past 4 years, the NYC metro area is pulling ahead so far in 2016, with $866M invested into the industry. Despite a strong showing in 2012, funding to digital health startups in Boston, known for its biotech industry, has not seen the impressive YoY growth of both Silicon Valley and NYC. Since 2012, funding in Boston is up 58%, compared to NYC’s growth of over 1000% and Silicon Valley’s over 150% increase. 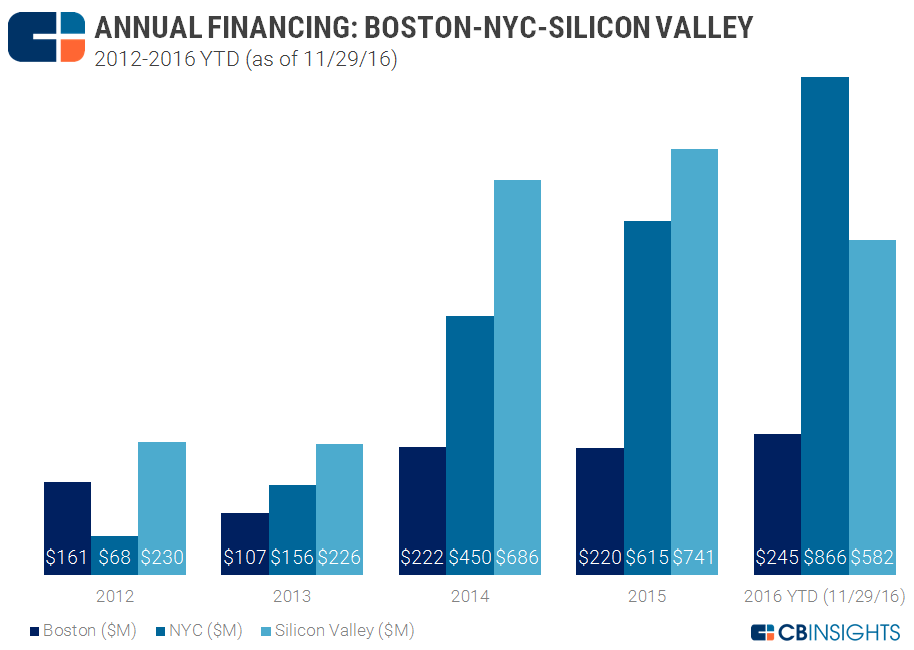 Silicon Valley is also on track for a slow down after two years of energetic deal activity. Boston, behind both Silicon Valley and NYC, has maintained a steady average of 33 digital health deals/year. 2016 is on pace to fall slightly below that trend, in keeping with the overall drop off in VC activity in 2016. 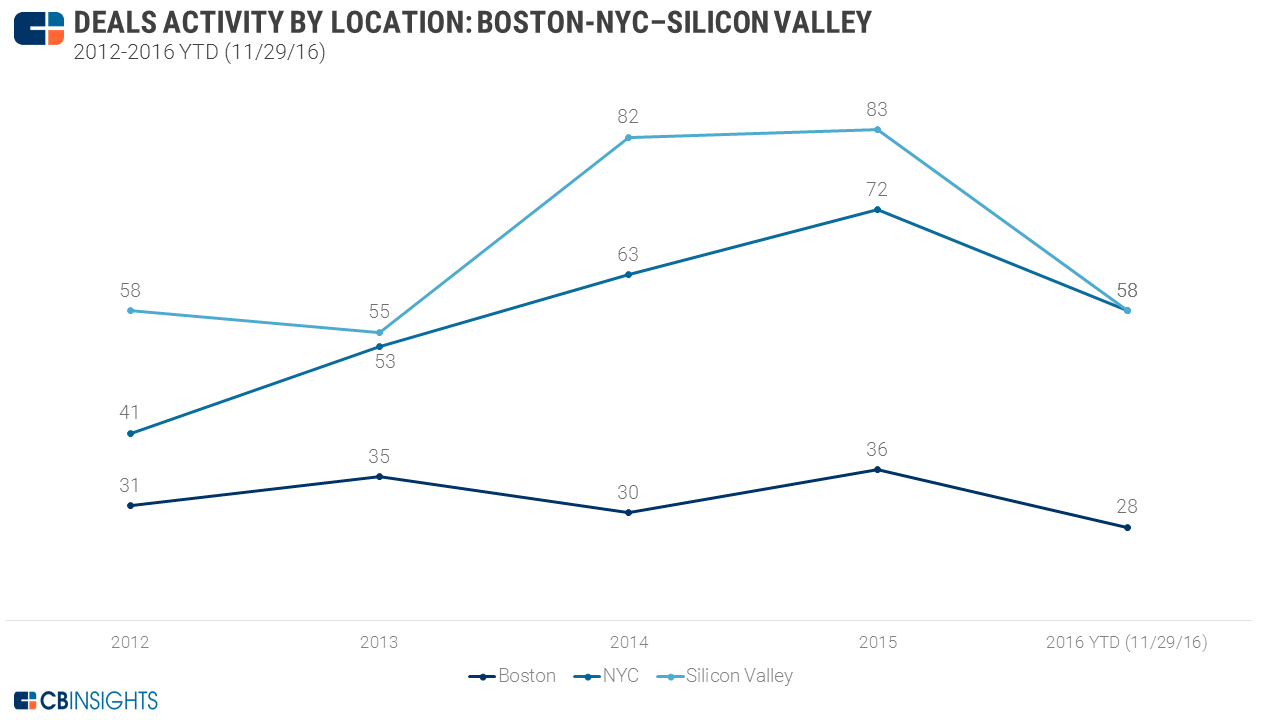 The NYC metro area appears to be pulling back from very early-stage digital health deals and transitioning towards less speculative investments. While seed/angel deals continue to make up the majority of deals to NYC-based digital health startups, deal share has fallen nearly every year since 2012, when it accounted for nearly three-quarters of deals.

On the flip side, Series A deal share has grown every year but is currently at 17% of all NYC digital health deals in 2016 YTD, down from 21% last year. 2016 has also seen growth in mid-stage (Series B and C) digital health deals, now at 23% of all deals. 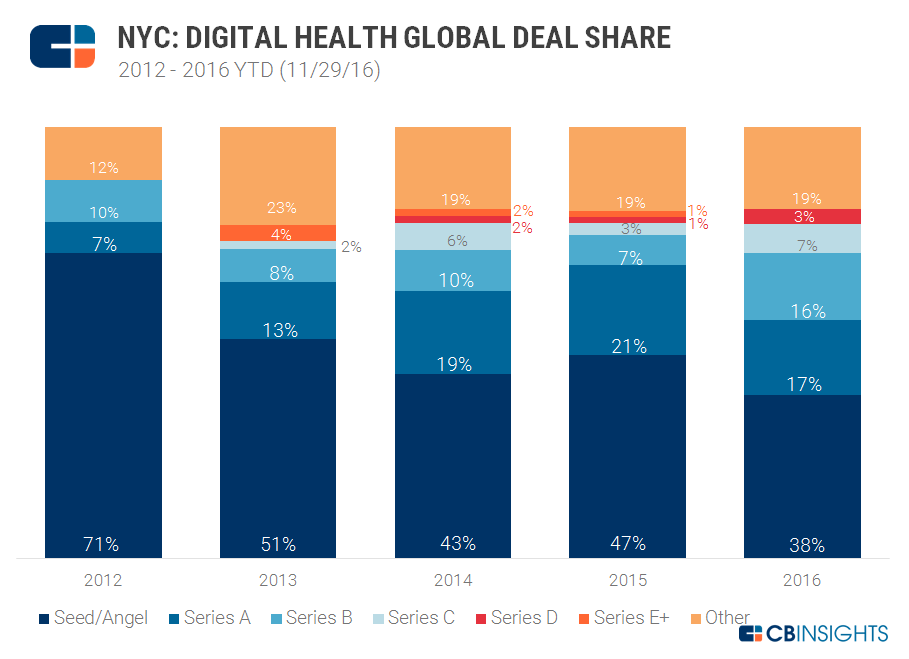 As in NYC, Boston has also been financing more Series A, B, and mid-stage deals, while seed and angel stage deals have lost share. The city has recently observed large YoY decreases in deals to seed and angel-stage digital health startups, currently at only 14% of total deals, down from 58% in 2012.

Series A stage deals, however, have been steadily growing every year since 2013 and have been the largest deal segment for the past two years. Mid-stage deals currently represent 28%, up from 14% in 2015. 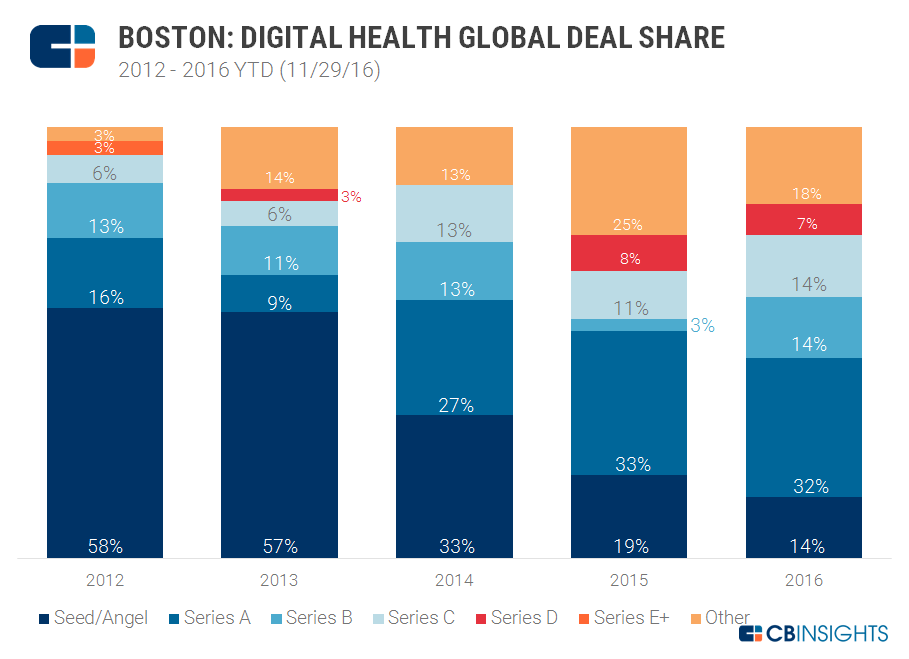 Mid-stage deal share has grown significantly since 2014, currently at 27% of all digital health deals. One of the most recent mid-stage deals was the $12M Series B to San Mateo-based Moov, developer of a wearable heart monitor that provides real-time feedback during a workout. 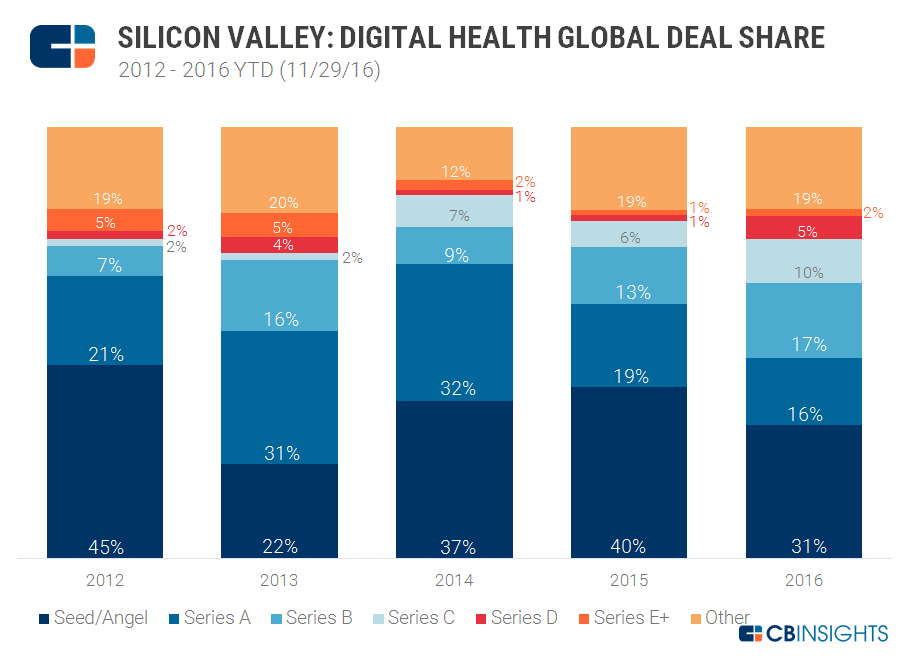