Digital health startups are bucking the trend in VC and enjoying a strong quarter, with a flurry of $100M+ mega-rounds buoying numbers.

While VC-backed companies saw a global slowdown in funding and deals in Q1’16, the digital health industry posted strong numbers in the quarter.

Q1’16 saw more than $2B invested in digital health across 316 deals, which puts 2016 on pace to break the previous year’s all-time high in deals and dollars. Activity in the digital health space has been increasing steadily since 2011, though dollar funding growth slowed between 2014 and 2015. 2016 saw 3 mega-rounds above $100M in the first three months of the year, including fundings into Oscar, Flatiron Health, and Jawbone. Oscar’s $400M financing in February represented nearly a fifth of the total dollars invested into the space in Q1’16. 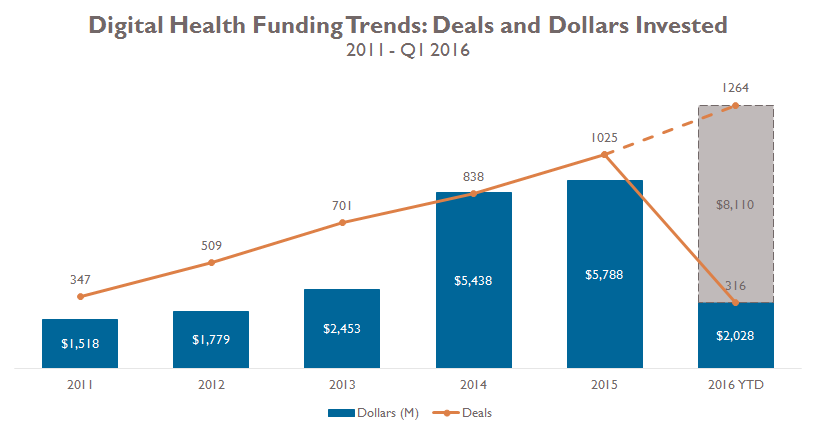 Seed/Angel funding took more than half of all deals in the first quarter of 2016. A large driver of this trend are the number of accelerators which are accepting and graduating more and more digital health companies, including Healthbox, Protechting, and TMCx. Series D deal share has consistently decreased since 2011, taking just 5% in 2016, and “Other” rounds (corporate minority, convertible note, etc.) have taken around a fifth of all deals. All other rounds remained relatively range bound. 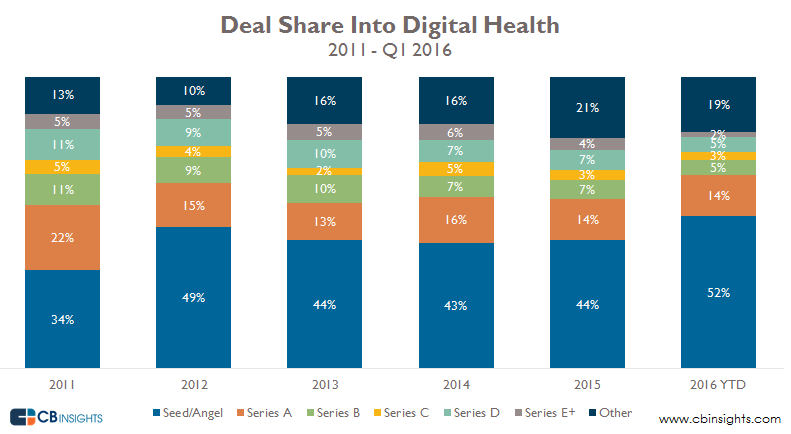 California continues to see the most funding into digital health companies, with more than 50 deals in the quarter occurring there. New York came in second, with over 30 financings including deals into Hometeam, LifeBeam, and AiCure. private market database below.