An in-depth look at the financing, exit, startup and investor landscape in the digital health industry.

Apple, Google, and IBM among other large corporations are all attacking the market. Venture capital investors have publicly expressed their bullishness for digital health. As Kleiner Perkins investor Dr. Beth Seidenberg wrote in May,

“With billions of dollars at stake, the U.S. health-care system offers entrepreneurs a tremendous opportunity to shake up one of the most complex sectors of the American economy.”

With billions at stake, venture capital and other investors ranging from angels to accelerators to private equity investors are increasing their financing to the space at a rapid rate and exit activity is also picking up. This analysis takes an in-depth look at the financing and exit landscape in the digital health industry as well as the investors and companies fueling the startup ecosystem. Note: Data is as of August 5, 2014.

Investors have deployed $6.05 billion to digital health (health IT) startups across 1401 deals in the past five years. 2013 was a peak in both deals and funding, as the year saw 64% YoY deal growth and 78% YoY funding growth. But 2013’s peak will likely be trumped in a large way if 2014’s current run rate continues. Of note, H1 2014 already saw more funding to the digital health space than in all of 2013 as the result of several mega-deals into the digital health industry. 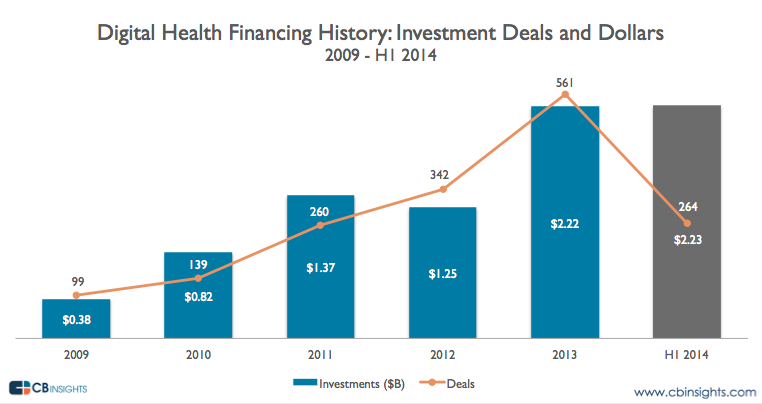 Indeed, digital health startups have already had quite a fruitful year to date on the funding front. The first two quarters of 2014 have already seen well over twice as much funding as comparable quarters in 2013, even though the number of deals remains around the same, highlighting bigger deals this year. Although there was a slight dip in deals from the first quarter to the second quarter, Q2 still hit a five-year high in funding, bolstered by mega deals such as Flatiron Health’s $130 million Series B round and Proteus Digital Health’s $120 million Series G funding. 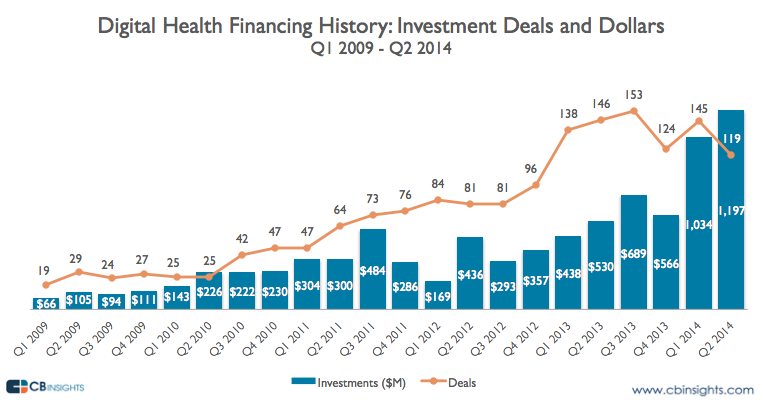 Peeling back digital health investments by dollar share, mid-stage investments have consistently comprised a good portion of each year’s funding. However, Series B investments saw a massive jump in funding dollars in 2013, caused by a few big deals such as Evolent Health’s $100 million deal and Health Catalyst’s $33 million deal. 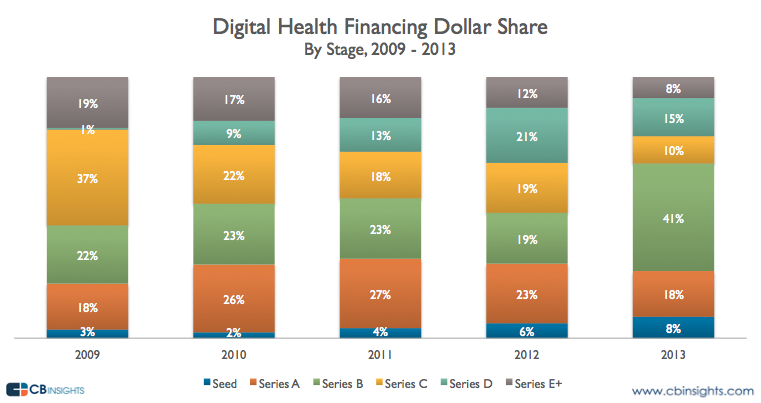 In terms of deal share, early-stage investments dominate.  With digital health being a hot area for investment, a great number of early stage investors are piling into the market. Seed fundings have seen a sizable jump in the past two years to make up about half of the total number of deals. Late-stage fundings regularly make up the smallest portion of the deal share, only topping 10% in 2010.  Of course, this is to be expected given the natural selection process of venture and the dynamics of the venture capital funnel. 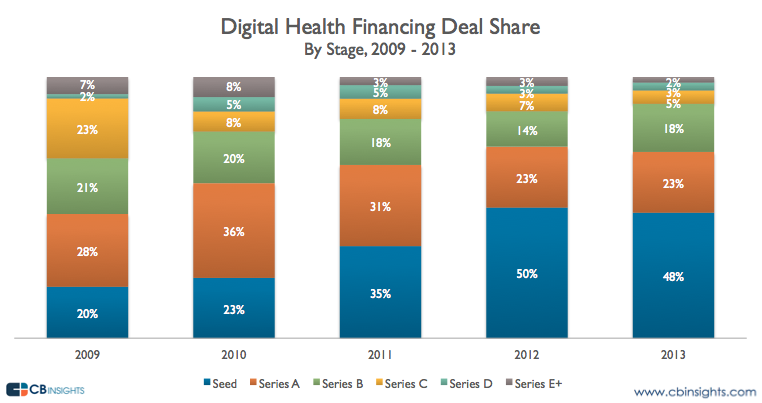 Of the most well-funded and still private (un-exited) companies in the digital health space, four out of the top ten are based in Silicon Valley. Jawbone takes the top spot, followed by runner-up Proteus Digital Health, which announced $172M in new Series G funding earlier this year.

The top 3 companies on a funding basis are detailed below with the top 10 below that. 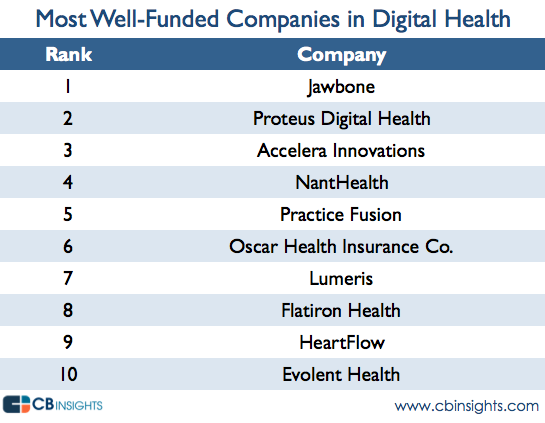 The top corporate VC firm in the digital health industry is San Diego-based Qualcomm Ventures, which has invested in companies such as Fitbit, Practice Fusion, and Voluntis. 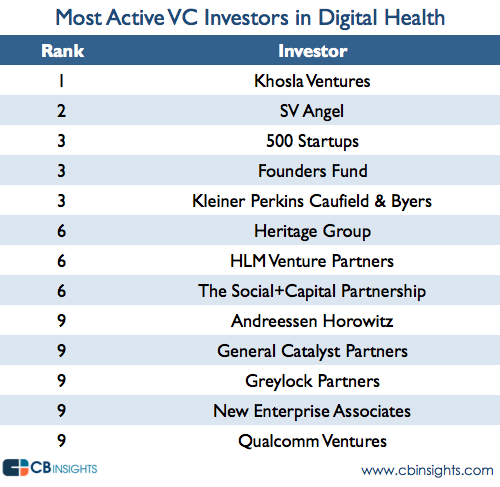 At the early stage, SV Angel is the most active investor, getting in early on companies such as Comprehend Systems, Agile Diagnostics, Lift Worldwide, and Flatiron Health. Interestingly, none of the investors on the list are purely healthcare-focused, demonstrating the wide appeal of the digital health space even among tech investors.

The most active individual angel investor in digital health is Esther Dyson, who focuses on healthcare, human capital, and aerospace startups. In addition to being an angel investor, Dyson founded HICCup, a nonprofit seeking to encourage a “rethinking of how we produce health.” A few of her early-stage digital health investments include HealthTap, Zeel, Omada Health, and VitaPortal. 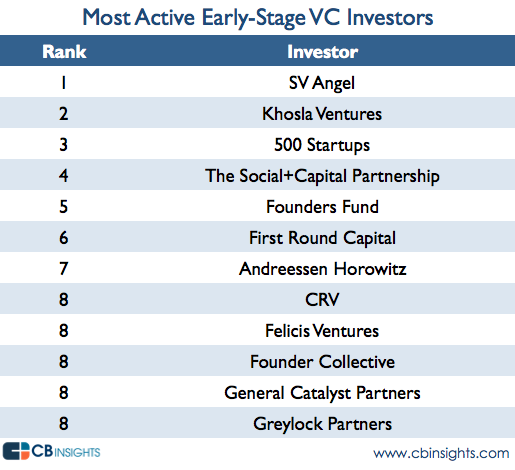 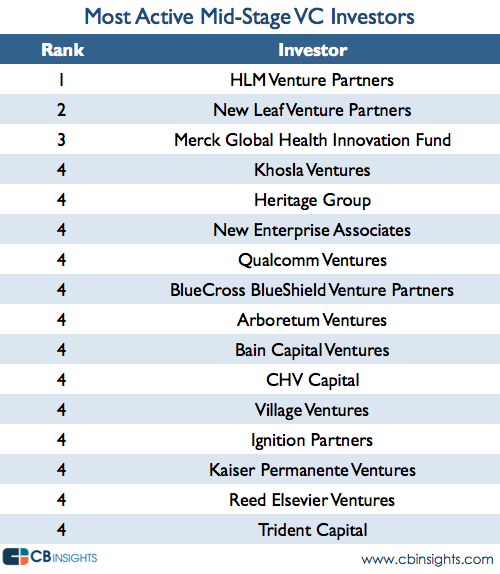 At the late stage, Kleiner Perkins is the most active VC investor, with RedBrick Health, AwarePoint, TelaDoc, and Practice Fusion in its portfolio. Three out of the six investors on the list are solely healthcare-focused. 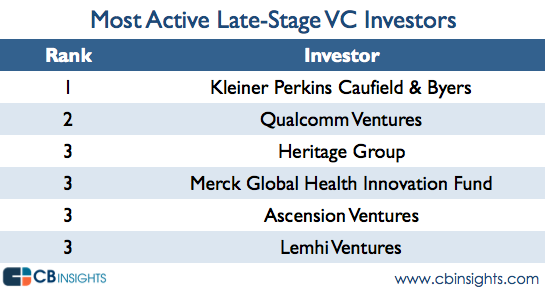 Exits in the digital health space have seen a steady increase in the past two years. Among the notable recent digital health exits are Emergence Capital Partners-backed life sciences software company Veeva Systems, General Catalyst-backed healthcare access management firm Imprivata and Venrock-backed Castlight Health.  Veeva which flew largely under the radar (among the popular tech press) is the most capital-efficient VC-backed exit in recent history – ahead of WhatsApp and Facebook.

Although 2013 only saw three digital health IPO’s, 2014 has already seen four in the first half of the year, making up a slightly bigger percentage of exits. 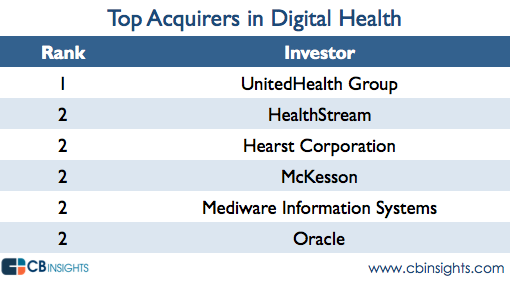