Wall Street players normally focused on public market investments are not shying away from early-stage bets on digital banking startups.

Investors have plowed more than $10.3B into digital banking startups since 2010, with both international and corporate players stepping up their involvement.

But “crossover investors,” those that are customarily focused on the public markets, have also joined the diverse array of financiers backing digital banking startups. These crossover investors include hedge funds, mutual funds, asset managers, and other diversified financial services firms.

(We define digital banking startups as those working across the banking value chain, including bill pay, lending, wealth management, and personal finance.)

Growth in crossover deals and dollars

Crossover investors have participated in 70 digital banking financings since 2010.

As with corporate investment, these funding figures have ballooned as crossover investors funnel dollars into late-stage mega-deals. Wellington Management has been active this year, investing in SoFi’s $200M Series D in February and its $1B Series E in August. Balyasny Asset Management participated in a $325M Series E round in September 2015 to online lender Avant. 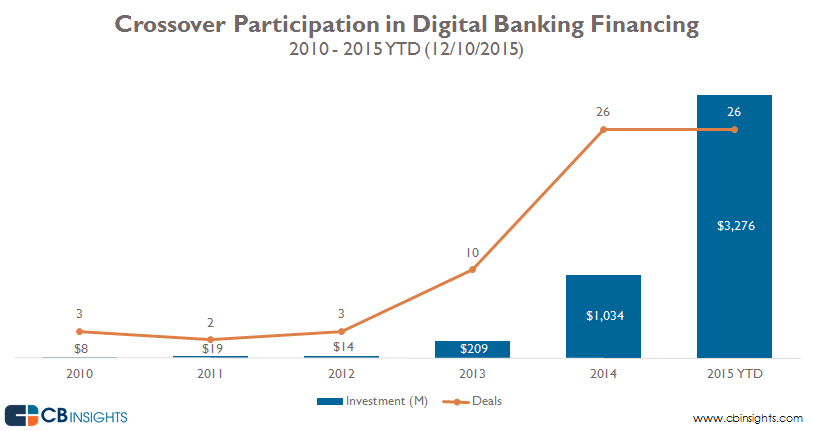 In deal terms, crossover investments skewed towards mid-stage rounds (Series B and C) but were quite diverse overall. 26% of crossover deals were early-stage (Seed/Angel and Series A), 46% were mid-stage, and 24% were late-stage (Series D+).

Crossover investors have not shied away from early-stage financing, with Series A rounds accounting for 23% of deals since 2010. This year’s examples include UMB Financial’s stake in 401K management startup Blooom and Valinor Management’s funding of Estonian peer-to-peer lender Bondora. 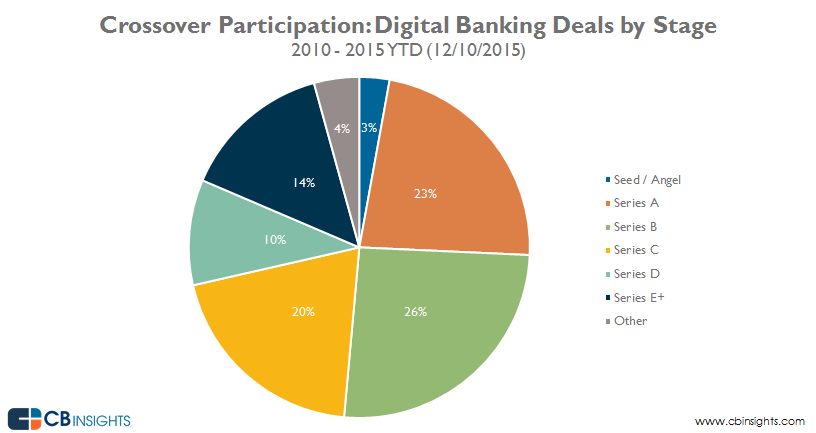