Since 2010, digital banking startups have received over $10.3B in funding, including financings from corporate and public market-focused investors, as they attack the consumer banking value chain.

Using CB Insights data, we compared financing activity to each of the four main digital banking categories, in order to determine the areas that have come into favor or have fallen out of fashion with investors:

Lending startups received the highest share of deals in every year since 2010. Lending has been particularly dominant in recent years, capturing 51% of all digital banking deals in 2014 and 50% in 2015 through 12/10/15.

Investment management startups reached their deal share peak in 2010 (29%), with Series A rounds to notable names like Betterment, Motif Investing, and Personal Capital in that year. Since 2011, however, deal share for this category has ranged from 16% to 20%.

Deals to banking and personal finance startups represented about a fifth of all digital banking deal activity in 2014 and 2015. 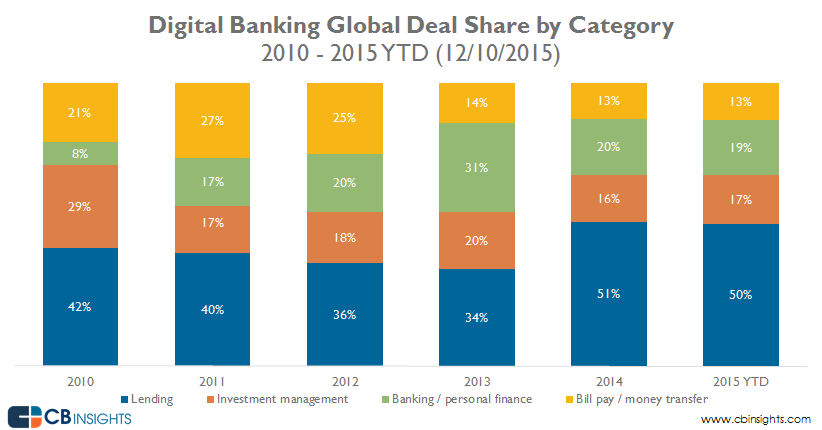 Lending startups are even more dominant when looking at dollar share. They have drawn more than half of all digital banking funding from 2012 onward, pulling in 63% of dollars in 2015, nearly three times more dollars than any other category. Other digital banking categories have seen less dollar share consistency.

The lending category’s dollar share has been driven by mega-deals. As personal lending startups chip away at a cornerstone of traditional banking, investors have lavished them with deals of $100M or more. 2015 alone saw 7 financings to lending startups of $200M or more, such as SoFi’s $1B Series E, Lufax’s $485M round, and Avant’s $325M Series E. 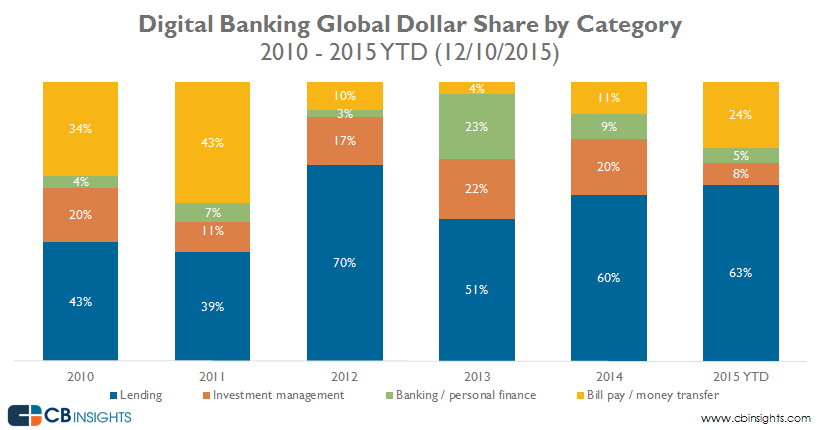