Type 1 diabetes and other autoimmune diseases are becoming increasingly common in the US. New research suggests antibiotics used in early life could be a risk factor.

Around 40,000 Americans are diagnosed with Type 1 diabetes every year, with most new cases emerging in children and adolescents. Despite widespread prevalence of the autoimmune disease, scientists understand relatively little about its causes.

With Type 1 diabetes poised to affect as many as 5 million Americans by 2050, scientists are eager to find ways to minimize risks of developing the disease.

Working with mice that were bred with a gene to ward off Type 1 diabetes, researchers at Harvard found that mice treated with antibiotics within the first six weeks of life lost their genetic resistance to the disease. The findings point to an early-life window in which administering antibiotics appears to disrupt the balance of gut microbiota, leading to the loss of autoimmune protections.

Many common antibiotics (including penicillins like amoxicillin and ampicillin) are regularly prescribed to pregnant women and newborns. According to the CDC, around ~266 million courses of antibiotics are dispensed to outpatients in US community pharmacies annually. That amounts to more than 5 prescriptions each year for every 6 people in the U.S.

A wealth of research has already highlighted the relationship between the gut and diabetes. For example, an endocrinology study published in January 2017 found that individuals with Type 1 diabetes displayed different, distinct combinations of gut bacterias compared to those without the disease.

Both the endocrinology study and the mice-diabetes research were interested in the roles that so-called “guardian genes” play in the development of Type 1 diabetes – especially in relation to gut bacterias. 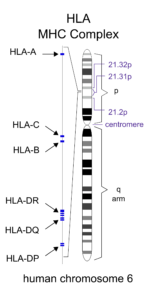 The human leukocyte antigen (or HLA) is a powerful “guardian gene” complex that helps keep the human immune system in check. Scientists have long understood that certain common variants, or “alleles,” of the HLA gene complex help protect humans from developing autoimmune diseases.

As the prevalence of autoimmune diseases continues to rise, understanding what factors affect HLA — and potentially degrade their effectiveness – is crucial to preventing or curing Type 1 diabetes, among other disorders.

To learn more about factors affecting HLA, scientists from the Department of Microbiology and Immunobiology at Harvard Medical School investigated how a similar guardian gene complex specific to mice responded to the introduction of antibiotics.

“We believe that our results not only offer a clue into a longstanding mystery but also raise the possibility that substances or environmental influences that alter the intestinal balance can modulate the effects of a powerfully protective gene and shape disease risk,” said Dr. Diane Mathis of Harvard Medical School.

A team led by Harvard professors Drs. Diane Mathis and Christophe Benoist carried out the work using mice bred as “non-obese diabetic (NOD)” — mice bred in a lab to spontaneously develop Type 1 diabetes during their lives.

But the mice utilized by the Harvard researchers had been bred to also carry MHC-II Eα:Eβ, a guardian gene allele that is similar to the HLA human gene guardian complex, and also known to protect NOD mice –which normally lack the isotype – from developing Type 1 diabetes.

Over a series of experiments, researchers treated the mice with bacteria-killing antibiotics at various times in their development. The aim was to determine how altering the bacterial balance of the mice’s “intestinal microbiota” would affect the potency of the protective gene allele.

The results indicated that the life stage at which the antibiotics were delivered had a clear affect on the protective effectiveness of the Eα:Eβ complex.

Despite carrying the protective gene complex, mice treated with antibiotics within the first six weeks of their lives still went on to develop severe inflammation of the pancreas. Pancreatic inflammation is a precursor to Type 1 diabetes that should not show up in mice engineered with the Eα:Eβ complex – a clear indication that the gene’s protective effectiveness had been eliminated.

In further experiments, treating mice with antibiotics between six and 10 weeks after birth did not lead to loss of genetic protection against diabetes.

Researchers say the observations suggest there is an early-life window in which the newborn gut is seeded by various bacteria that may be crucial to the potency of MHC and HLA genes. Meddling with that process in early life via antibiotic treatment appears to disrupt the balance of the gut microbiota, leading to the loss of genetic protection.

The research also found NOD mice offspring to be affected by the antibiotic treatment of their mothers: When female mice engineered with the guardian gene received antibiotics within the ten days before giving birth, their offspring lost their protection and developed inflammation.

Further research is necessary to bear out the results but the researchers see their findings as illustrating two interrelated notions: 1) that early antibiotic exposure can affect disease risk; and 2) that doctors may want to minimize antibiotic treatment in infants and pregnant women during critical periods of development.

Antibiotics were not the only culprit for the guardian gene complex’s diminished protective capacity: Mice that were born with the protective gene but raised in sterile cages never acquired the same “gut microbial balance” for disease protection that gene-carrying mice raised in a non-sterile environment developed either.

Having been deprived of bacterial exposure during their early development, the mice developed diabetes. Researchers say the observation may underscore the importance of normal environmental factors, and germ exposure, to immune system health and effectiveness.

Lastly, other elements of the Harvard research further highlighted the importance of gut microbes as a modulator for disease: When fecal transplants from mice with the protective gene were implanted in diabetes-prone mice, the latter group displayed reduced pancreatic inflammation and did not develop diabetes.