Research Brief
2605
HR tech funding recovered in Q1'16 after tapering off in the second half of 2015. 500 Startups and NEA are the most active VC investors to date.

HR tech investment hit record annual levels in 2015 with $2.4B raised across 383 deals. However, funding and deals slipped in the second half of that year after a peak quarter in Q2’15. 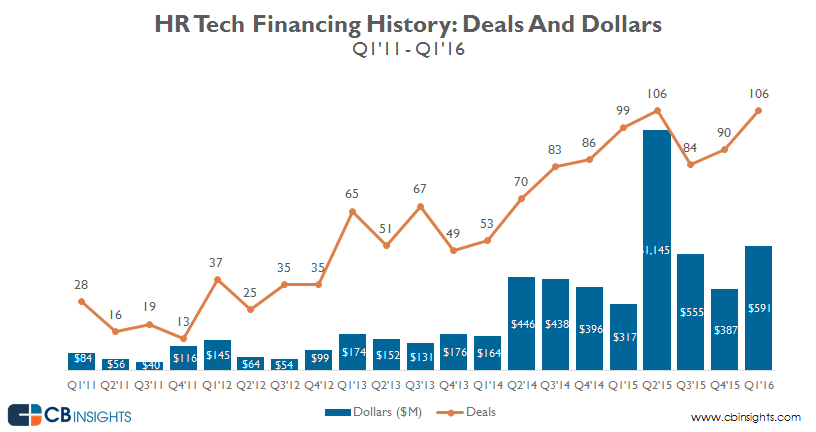 Troubled insurance and payroll startup Zenefits is the most well-funded HR tech company in 2016 (the company was in the news early in 2016 after its CEO Parker Conrad resigned following irregularities in how the company complied with regulations). Despite its setbacks, Zenefits has raised a massive amount of money, as we analyzed in a brief comparing its funding figures to those of its competitors.

The top 3 list is rounded out by less well-known HR tech companies like OneSource Virtual (a Texas-based provider of HR solutions built on the Workday platform) and China’s FXiaoKe.

In March 2016, we highlighted the most active HR tech VC investors, with a tie in the first spot between 500 Startups and Andreessen Horowitz.

Since then, 500 Startups has emerged as the most active HR tech VC with its recent bet on Thailand-based GetLinks. NEA and Andreessen Horowitz are also active VC investors in HR tech and are now tied in the second spot.