Research Brief
1456
We analyzed the median number of days between fundraisings to see when startups accelerate investment. Here's the data.

Burn rates and tech bubbles are a hot topic these days. But are they really increasing? And if yes, is there a particular stage of financing at which they climb?  If we use days between fundraising rounds as a proxy for burn rate, we wanted to provide a data-driven view into this and see if there is a particular round of financing where burn rates accelerate.

To do this, we analyzed CB Insights data to determine the median number of days between different equity rounds for tech companies since 2009. Based on the data, it looks like companies accelerate their spend after raising an A round.

Interestingly, seed stage companies seem to be going longer with seed investment.  This, of course, may be due to seed deal sizes climbing over time.  In fact, the median number of days between seed and series A tech financings hit its longest of the past 5 years in 2013 at 382 days. YTD 2014 is only slightly off those highs at 349 days. The shortest time between seed and Series A over the past 5 years was in 2011, when hot companies like Mailbox, Warby Parker, and Path all raised their Series A less than 4 months after their seed. 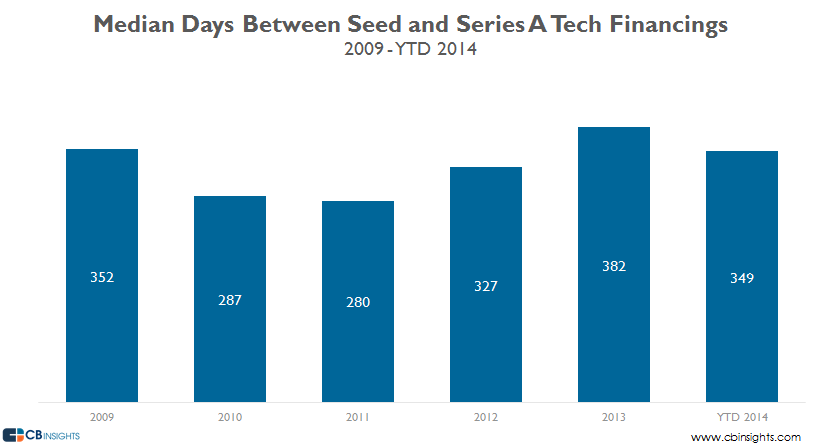 As previously stated, the burn rate seems to step up at the Series A stage as the median days between tech Series A and B financings is at its six-year low in 2014, at 441 days.  Do today’s startups need to raise their series B faster, amid increased competition and pressure to scale the team, increase revenues, and take the market?

With fast growing companies like Secret (an early favorite in the ephemeral app space) and Zenefits, as well as The Hunt and Remind, two startups we previously covered due to their stellar mobile performance, all raising their A and B rounds less than 6 months apart, this may be the case. 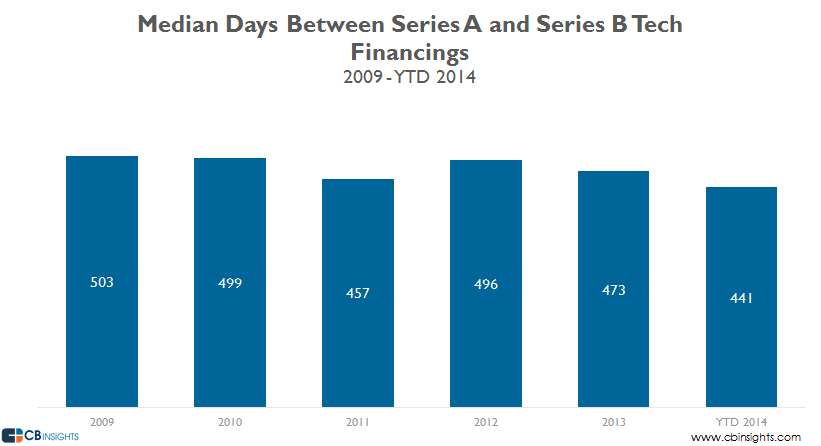 Going one stage further, we find that the median days between Series B and C tech financings was 566 in 2013, with 2014 YTD slightly shorter at 553. These numbers have been relatively consistent since 2012, after once again, 2011 saw the shortest amount of time between B and C since 2009. In 2011 mid-stage startups like Violin Memory and Square both raised their Series B and C rounds less than 6 months apart. 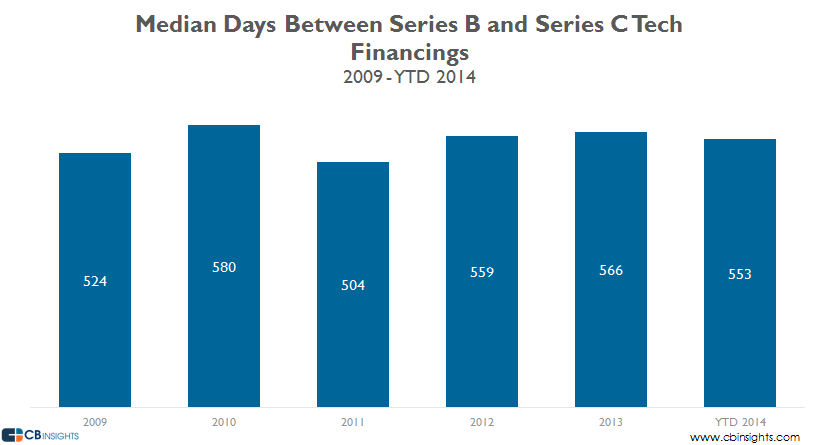 To track seed, Series A, B, C deals and beyond and get them pushed to you automatically, login to the CB Insights private company financing database or create a free account below.
If you aren’t already a client, sign up for a free trial to learn more about our platform.