Tech bubble predictions have been the rage for a while. We use CB Insights data to identify when the proverbial bubble might actually pop.

In 2007, Josh Kopelman of First Round Capital compiled a list of bubble predictions by year and ended his post by stating,

“Even a broken clock is right two times a day. By proclaiming a bubble every year, everyone can say they “called it.”

Since we started CB Insights in 2010, we’ve been asked the question every year as well.

In late 2015 and into early 2016, those bubble proclamations hit a fever pitch especially after the pace of unicorn births picked up in Q2’15 and Q3’15 with 23 new unicorns joining the club in each quarter. That rapid increase in paper unicorns was nicely captured in this graphic.

Just as quickly as the unicorn stampede started, it slowed rapidly with a deep pullback in venture funding in Q4’15. The number of unicorns ‘birthed’ in Q4’15 fell dramatically as can be seen below.

This pullback coupled with a lack of an exit market (remember IPOs?) and the abysmal performance of the public markets in early 2016 has gotten the bubble prognosticators in a lather again.

But we take exception with these predictions for one reason.

Nobody ever gives a date.

We don’t think so.

And so we wanted to see if we could provide a data-driven view into when the moment of reckoning will be (or whether it has already passed).

So what does the data reveal? Over 60% of unicorns will likely need to raise their next round of capital in the next three quarters, nearly 4 of 10 US unicorns will need to raise in the final two quarters of 2016. Note: Data included in this brief is as of 1/29/2016. Several billion-dollar companies have since raised follow-on financing rounds.

We break it down.

How long does it take unicorns to raise funding?

We start by analyzing the typical time between the latest two financing rounds across the cohort of US unicorns. While some companies including ZocDoc and SpaceX waited many years between their last two rounds, others including Uber, Snapchat, and Tanium all raised their last two rounds in under 1 year. To balance for this, we used the median time between financing rounds, which clocked in at 1.1 years. 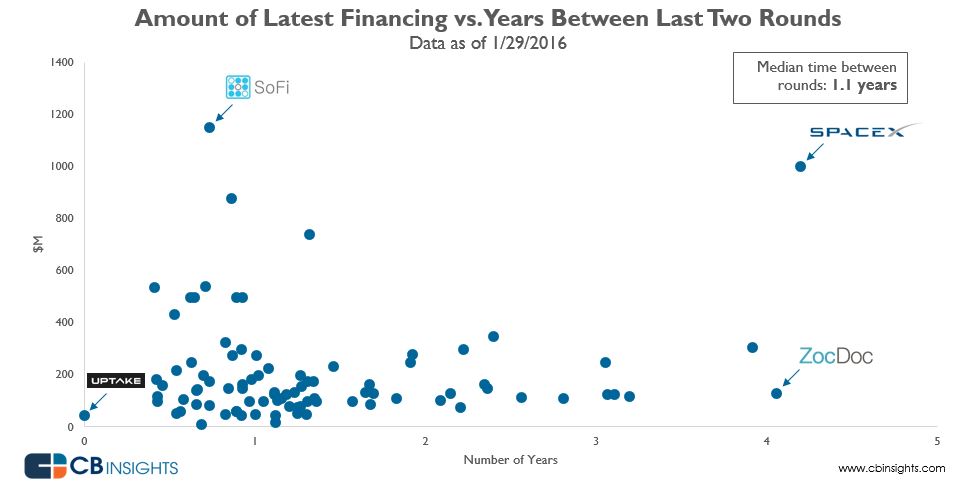 Interestingly and counterintuitively, the data highlights that companies who took bigger checks raised quicker than those who raised smaller rounds. While you might think that smaller rounds would require quicker fundraising, the trend to the contrary points to the fact that investors try to pile into the perceived winners. And so those companies that are “hot” are raising larger rounds quicker and likely at better terms given the intense interest in them. (Uber is the poster child of this phenomena as the company raises $1B rounds incredibly regularly)

When will unicorns need to raise next?

In order to answer the above question, we applied the overall median time between rounds to the date of unicorns’ last financing round. The graphic below helps illustrate our estimate for when most unicorns will need to raise next:

It’s this traffic jam in the latter half of 2016 when the proverbial “poop might hit the apparatus with rotating blades”. These companies will either need to

On option #3, it is worth remembering that acquirers have been slowing activity of late and many of these unicorns have priced themselves so high that a logical buyer doesn’t really exist. Of course, if the market has forced them to see reality and their valuations reset, perhaps there will be buyers?

If we don’t see these financings occur by the final 6 months of 2016, that is a clear indication that things have really gone south. Of course, the one thing that may extend this time frame is a significant reduction in expenses by these unicorns that serves to extend their runway. Layoffs and cost rationalization are likely given the souring sentiment and the sudden interest in unit economics and rational spending.

The much-discussed bubble has not popped yet. If the second half of 2016 sees unicorns running into a financing wall, that will be the surest sign that the good times are, in fact, over.

Looking for more venture capital and exit data? Sign up for the CB Insights Venture Capital Database free below.