Research Brief
3153
Corporations are still betting actively on cybersecurity — Intel Capital is the most active.

Corporations and their corporate venture arms — including Intel and Google — have become increasingly active in cybersecurity investment, despite overall deals and dollars to cybersecurity startups slowing down in 2016 year-to-date.

There were four mega-funding rounds of $100M or larger to cybersecurity that involved corporates since 2012. This year, Cylance which applies artificial intelligence algorithms to predict, identify, and stop malware and advanced threats secured a $100M Series D with participating investors such as Capital One Growth Ventures, Citi Ventures, and Dell Ventures. Also, Mobi Magic which develops Android security apps received a $100M Series B in February 2016 with participation from Qihoo 360 Technology. The company is backed by corporate investors including Baidu, Google Capital, Microsoft, and Qualcomm Ventures.

We used CB Insights data to see funding trends involving corporates and cybersecurity startups, their activity by deal stage, and identified the most active corporate players in this space.

Corporate financing activity in cybersecurity has grown steadily since 2012, peaking in 2015 at $1.1B across 60 deals. This year, at the current run-rate, dollars and deals will rise to an all-time high of roughly 80 deals and over $1.5B in funding. 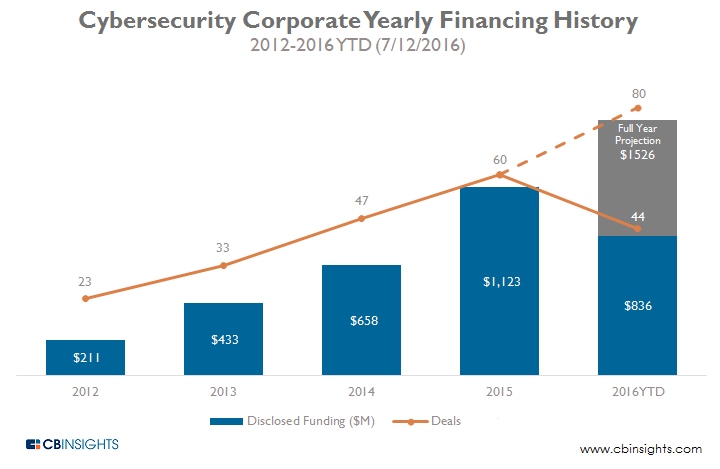 Looking at quarterly financing history further details the recent growth of corporate investment activity in cybersecurity. Activity began to ramp up early in 2015, and as of Q2’16 there have been 5 quarters straight of 15+ deals. Notable Q3’15 deals involving corporates included an $85M growth equity round secured by Zscaler. Zscaler is backed by corporates including EMC Ventures and Google Capital (Google Capital invested in a $25M Growth Equity round later in 2015).

While dollar funding from deals involving corporates peaked in Q3’15, deals rose to an all time high of 25 deals in Q2’16 — signaling persistent corporate interest in cybersecurity startups. 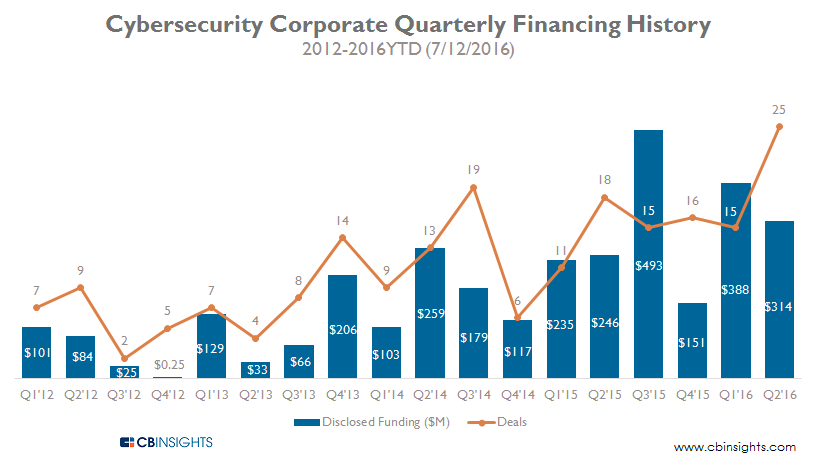 Corporate funding activity to cybersecurity startups skews towards mid-stage investment rounds. From Q1’12 to Q2’16 almost half (49%) of cybersecurity deals involving corporates were for Series B and C stage deals. Series E+ rounds saw the fewest number of deals since 2012, 6% of the total.

Notable Series C investments this year include: Darktrace ($65M), a round that included Samsung and SoftBank Group; and Silent Circle, which helps enterprises secure communication networks ($50M) with the involvement of Santander InnoVentures. 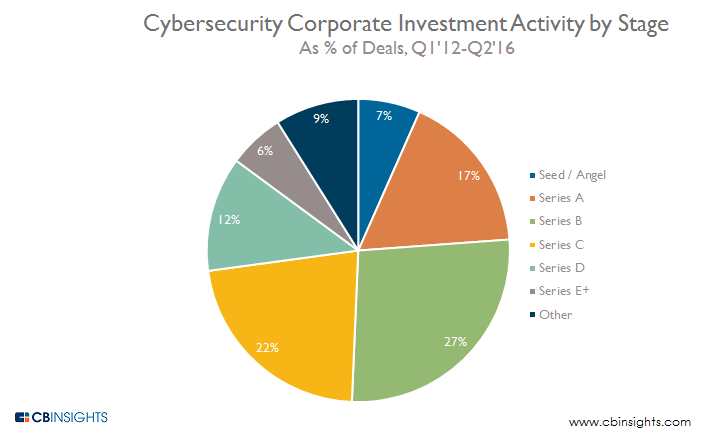 Most active corporates investing in cybersecurity

Topping the list of most active corporates in cybersecurity is Intel Capital. Intel’s recent cybersecurity bets include participating in two Series D rounds: a $40M financing to Bromium this year, and a $44M Series D to Vectra Networks last year.

Google Ventures was the second most active, with investments that included participation in a Series B investment in Security Scorecard this year.