Research Brief
3008
After a peak in late 2015, the beginning of 2016 saw more tepid investor interest in cybersecurity. NEA is the most active investor.

Five out of the nine private company unicorns in cybersecurity reached their $1B+ valuations last year, as the category remained hot in the wake of persistent security attacks and hacks faced by business and government.

But deal activity and dollar funding have since slowed down amid investor worries that the space has been overfunded.

Using the CB Insights database, we examined trends in global funding activity to cybersecurity companies since 2012. At the current run-rate funding to these companies will surpass $3B across more than 300 deals in 2016. But that signals a leveling-off of investors’ appetite for cybersecurity, especially compared to the market’s peak in 2015 when we saw $3.75B invested across 336 deals.

Investors are beginning to step back slightly from the levels of deal activity and funding seen in cybersecurity when it peaked last year.

Funding in 2015 was driven in part by five $100M+ mega-rounds: CrowdStrike ($100M Series C), Illumio ($100M Series C), CloudFlare ($110M Series D), and Tanium ($117.5M Series G). The largest round of last year was obtained by Tenable Network Security ($250M Series B), which provides continuous network monitoring to enterprise customers including the US Department of Defense. 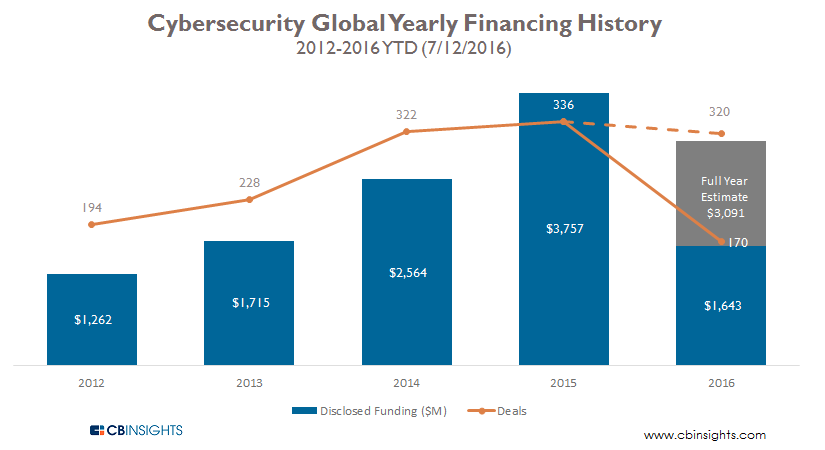 Quarterly funding totals are noticeably off the peaks seen in Q3’15 and Q4’15 (the latter saw $1.3B in a single quarter).

While funding and deal activity has been lower than the peak quarters in late 2015, funding and activity remains robust on a year-over-year basis. Looking at the first half of 2016, dollars invested in cybersecurity companies were $1.5B, which is higher than the $1.4B in funding seen in the same period in 2015.

Six out of the last 7 quarters have seen 80+ deals in the category. 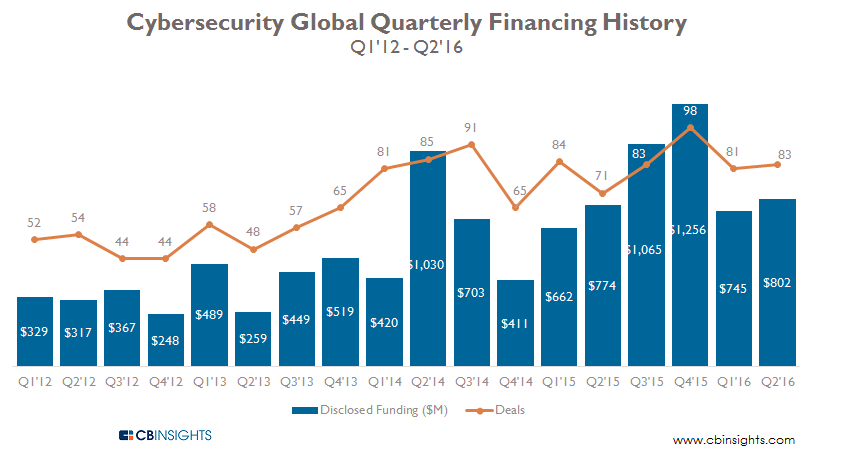 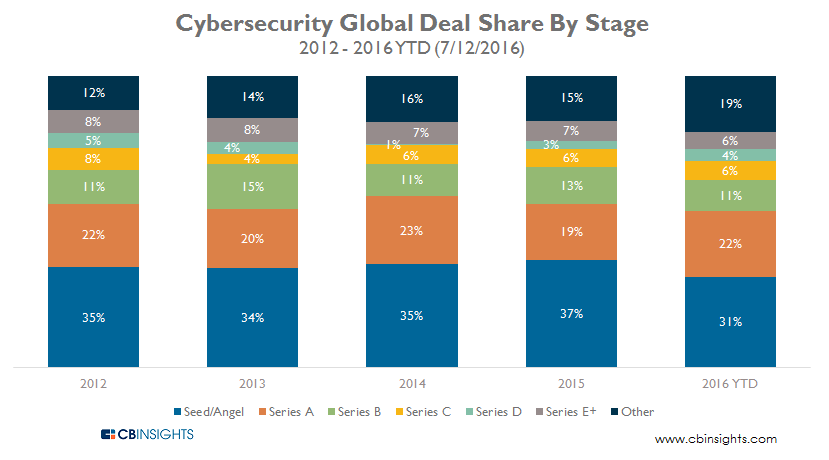 Most active investors — by number of unique investments

New Enterprise Associates took the top spot as the most active VC investor in cybersecurity since 2012. New Enterprise Associates’ investments include the unicorn CloudFlare. Accel Partners and Intel Capital tied for second.  Accel Partners’ investments include Crowd Strike and AirWatch, which was acquired by VMware. Intel Capital invested in companies that include Fortscale Security, and Bromuim, which provides security teams with analysis of advanced malware threats.

Andreessen Horowitz took the fourth spot, with investments that include the two unicorns Tanium and Lookout, which is a smartphone security company. Notably, Accel Partners and Andreessen Horowitz have co-invested in cybersecurity including in backing the unicorns Lookout and Illumio, which helps customers reduce their “surface area” vulnerable to attack by securing data center and cloud traffic.

The top 10 most well-funded cybersecurity companies (excluding debt financing) have all secured over $100M, with the top half obtaining over $200M.

Companies on the list are mostly offering enterprise solutions, including Bit9 + Carbon Black and Cylance (the latter applies artificial intelligence algorithms to predict, identify and stop malware and other threats). Other companies on the list that are in the mobile cybersecurity space include: Lookout, OpenPeak, Okta, and Mobi Magic.

Want more data on cybersecurity startups? Login to CB Insights or sign up for free below.