Research Brief
4061
Last year saw a record of over 400 deals to cybersecurity companies around the world, but in Q4 deals dipped significantly.

Last year, cybersecurity funding deals reached a record high, with Q3’16 as the most active quarter for deals to cybersecurity companies in the last five years. However, that record quarter was then followed by a notable slow down in Q4’16, with only 76 deals, the fewest since Q3’13.

Last year’s record deal activity shows that cybersecurity remains hot in the wake of persistent security attacks and hacks faced by business and government. Investors are still predominately making bets in early-stage cybersecurity companies (seed & Series A), an indication that in an evolving cyber-threat landscape, new solutions are still needed that can help mitigate, and perhaps even predict, attacks.

Using the CB Insights database, we examined trends in global funding and exit activity to cybersecurity companies since 2012. This brief covers:

2015 is still the highest year on record for dollars to cybersecurity companies, with nearly $4B invested in the industry. Last year, funding came in at almost $3.5B invested.

So far in 2017 through 02/07/17, there have been nearly 30 deals in cybersecurity. The biggest deal went to the endpoint security company SentinelOne ($70M Series C). 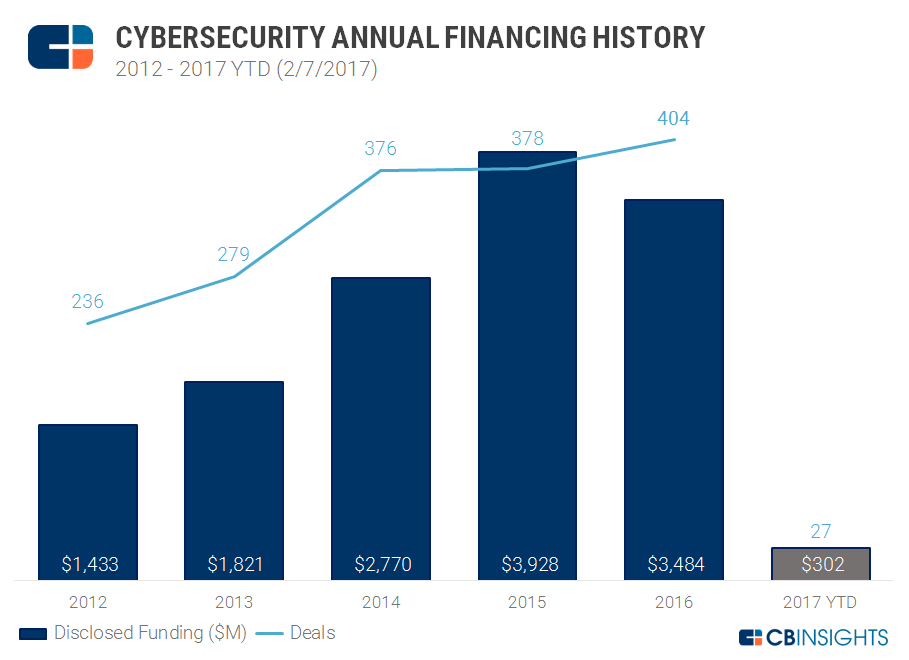 Q3’16 saw 114 deals to cybersecurity companies, the first quarter to break 110 deals. However, on a quarterly basis investment activity may be showing signs of cooling off. Q4’16 saw deals drop below 80, the first time deal activity has been that low since Q4’13, and fewer dollars were invested at the end of last year than in any quarter since Q1’14. 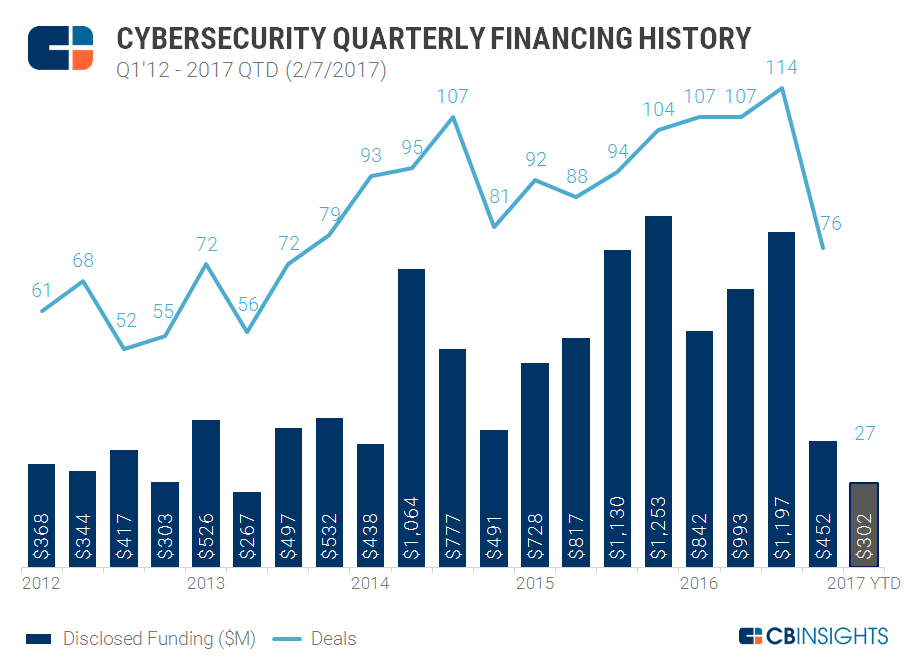 Overall, the share of deals by investment stage has not fluctuated greatly over the past five years. On average, over half of the deals made by investors in cybersecurity since 2012 have been at the early stages (seed & Series A). Likewise, deal share in the “Other” category takes a significant share of the overall deals since 2012. “Other” includes convertible notes, a mechanism often used by investors in early stage deals. 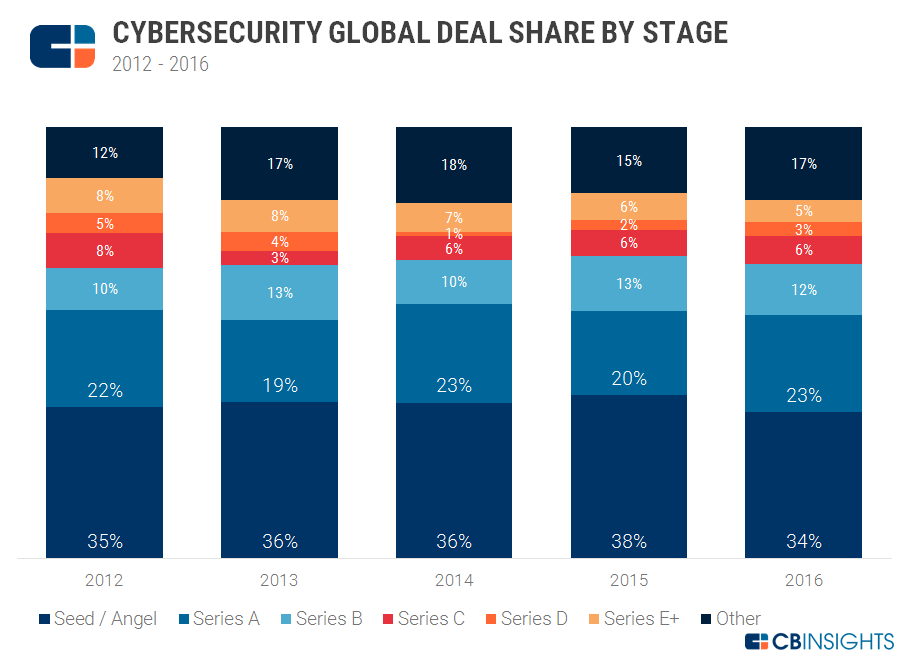 Last year, there were fewer than 90 exits in cybersecurity, significantly fewer than in 2014 and 2015. The Indian company Quick Heal Technologies was the only cybersecurity company to IPO last year. In 2017, we have seen eight M&A deals through 2/7/2017. Those deals include the acquisition(s) of two cybersecurity companies that leverage artificial intelligence technology. The company Niara was acquired by Hewlett Packard Enterprise in February, and Harvest.ai was acquired by Amazon in January. 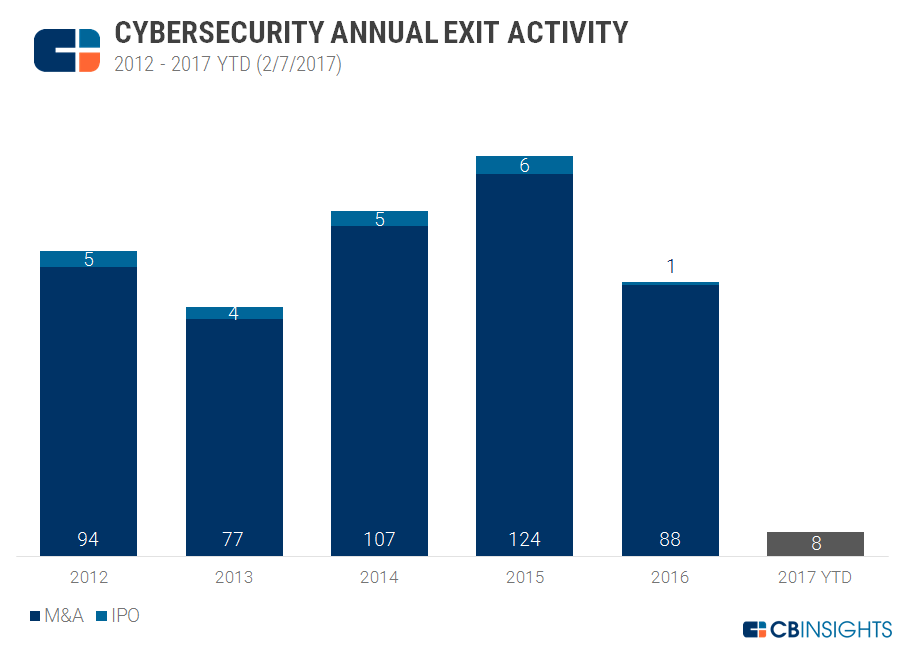 Tenable Network Security is the most well-funded privately owned cybersecurity company. Rounding out the top five are: Tanium, Lookout, OpenPeak, and Okta in fifth.