Q1'17 was the most active quarter for deals to private cybersecurity companies over the last five years.

Global cyber attacks against business and governments including attacks like the recent “WannaCry” ransomware fiasco only seem to be getting wider in scope, and potentially more damaging. In tandem with the rising quantity and severity of attacks, investors are making more deals to back private cybersecurity companies than ever before, as companies and governments look to better secure their networks, data, and devices.

Investors backed more private cybersecurity companies in 2016 than any year since at least 2013. Likewise, deals in Q1’17 hit an all-time quarterly high, up 20% from the previous quarterly deal high.

In addition, the company Okta, which specializes in Identity & Access Management as-a-service (IDaaS) was valued at $1.5B in an IPO in April. Before Okta’s IPO in Q2’17, it was one of a handful of private cybersecurity companies valued at $1B+, all tracked on CB Insights’ unicorn tracker.

Currently, there are eight unicorn companies in cybersecurity valued at $1B+. CrowdStrike, a SaaS company that offers endpoint protection, threat intelligence, and pre and post incident response services, is the newest cybersecurity company to join the global unicorn club. CrowdStrike was valued at $1B on 5/17/2017, when the company obtained a $100M Series D round from investors that included: Warbug Pincus, Accel Partners, and Alphabet’s growth equity arm capitalG (formerly known as Google Capital).

However, despite occasional mega rounds of $100M+, investors are still predominately making bets on early-stage cybersecurity companies (seed & Series A), an indication that in an evolving cyber-threat landscape, new solutions are still needed that can help mitigate and perhaps even help predict attacks.

We used CB Insights data to dive deep into cybersecurity funding trends. In this research brief we cover:

Deals to cybersecurity startups have risen gradually since at least 2013, and peaked last year when investors put over $3.5B into these companies across over 400 deals. Dollars were down slightly last year compared to the peak in 2015. Nevertheless, funding was well-over $3B the last two years running. At the current run rate through 2017, deal activity is on track to rise to an all-time high and dollars are on track to come in just above last year’s total and near the all-time high we saw in 2015.

This year, out of the over 190 deals in cybersecurity as of 5/17/17, there has been only one mega-round of $100M+ — the $100M Series D round to CrowdStrike noted above. The second-largest deal this year went to the company Armor Defense, which secured a $89M Series F investment in April, from investors including Singapore Technologies Telemedia and The Stephens Group. Two other cybersecurity companies have secured funding rounds greater than $60M in 2017: Verisys ($73M Growth Equity, Q1’17), and SentinelOne ($70M Series C, Q1’17).

In November 2015, the company Tenable Network Security secured a $250M Series B round from Accel Partners and Insight Venture Partners. Other companies that secured mega-rounds in 2015 include: Tanium, CloudFlare, CrowdStrike, and Illumio. 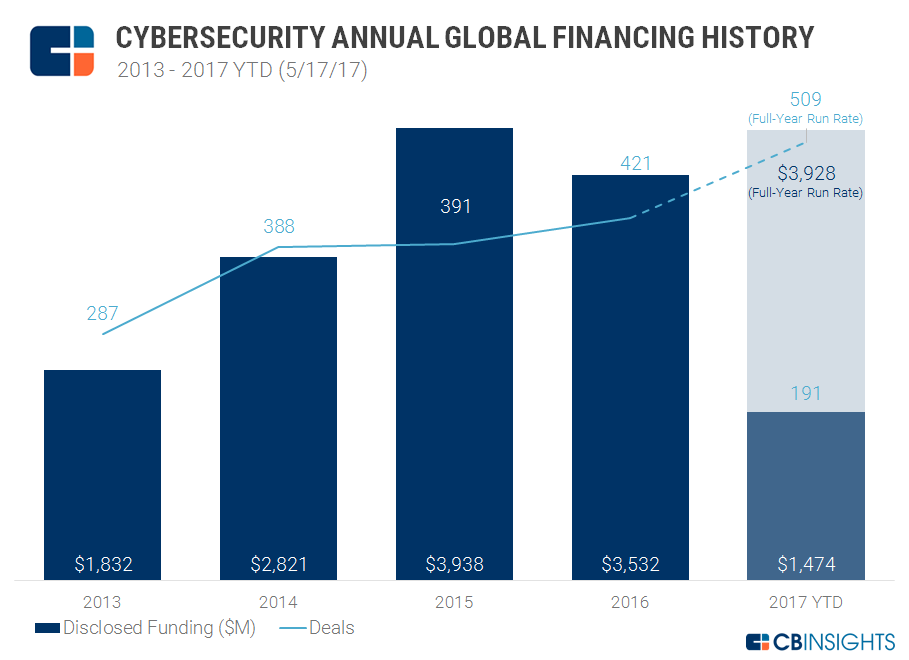 On a quarterly basis, deals to cybersecurity startups reached an all-time high through the first quarter of this year with nearly 140 companies securing funding rounds. Quarterly deals to cybersecurity startups have trended over 100 since Q3’15, with the exception of Q4’16, when deals fell below 90. Dollars invested in these companies in Q1’17 were the highest of any Q1 over the time period tracked.

So far in Q2’17, over 50 cybersecurity companies have obtained funding in deals that total nearly $600M. 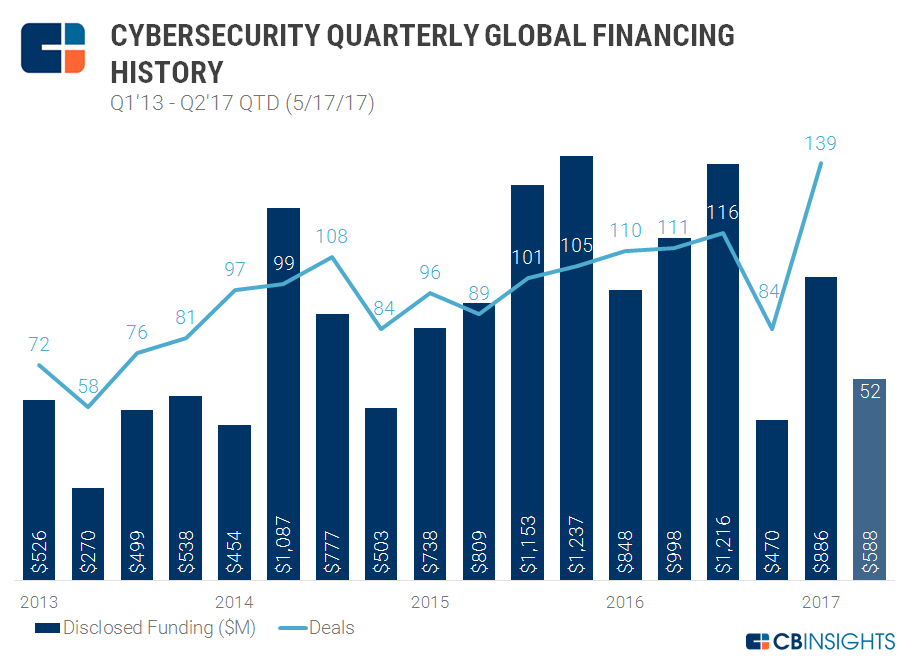 Since 2013, over 50% of the deals annually in cybersecurity have been at the early-stage (seed – Series A). However, the share of deals that occur at the Series B stage or later have increased over the time period. Other deals, which include debt rounds and convertible notes have also increased as a share of overall deals since 2015. 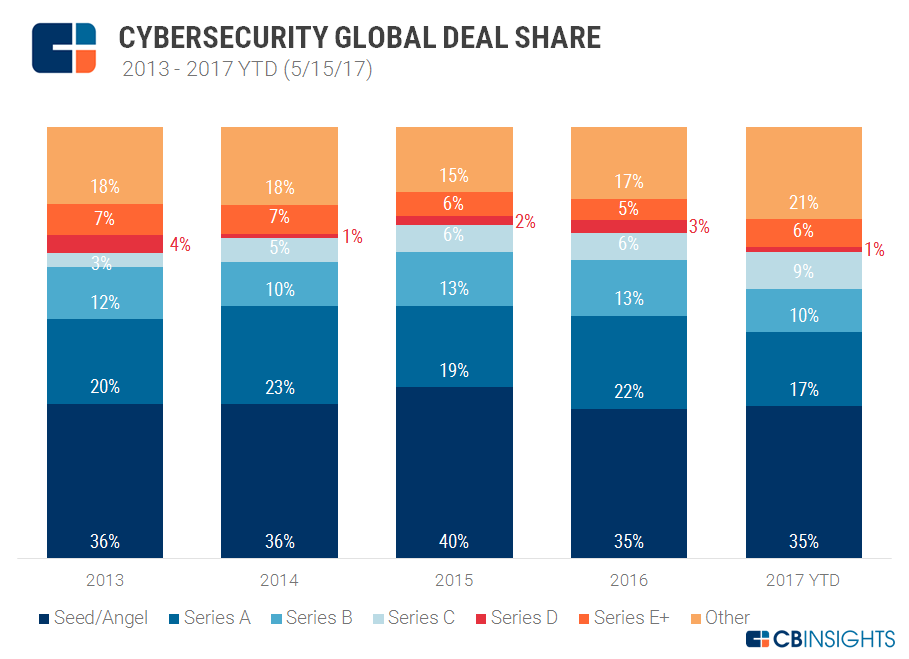 New Enterprise Associates (NEA) and Bessemer Venture Partners tie for the top spot as the most active VC investors in cybersecurity since 2013. Rounding out the top three is Accel Partners.

The most well-funded VC-backed private cybersecurity company is Tenable Network Security, followed by Tanium and then Lookout.