Research Brief
3237
There has only been one VC-backed cybersecurity IPO this year. The last 18 months have not seen a top 5 exit in the industry.

Exit activity for cybersecurity companies is showing signs of a significant slowdown.

According to CB Insights data, the first 8 months of this year saw 40 cybersecurity exits globally, with 39 M&A transactions and 1 IPO in August for the Indian company Quick Heal Technologies — compared to 113 exits, including 108 M&As and 5 IPOs, in 2015.

The exits slowdown tracks the funding slowdown in the category. At the current run-rate, funding to VC-backed cybersecurity startups (those that have not exited) will surpass $3B for full-year 2016. However, that represents a leveling-off in investors’ appetite for cybersecurity compared to last year’s peak, which saw investors betting nearly $4B across a similar level of deals.

In fact, investors have expressed concern that the space is overfunded and this could be contributing to the drop off in funding.

The peak year for activity was 2015. M&A transactions hit 83 in 2012, and then dropped to 65 the following year, only to pick up again in 2014 with 90 acquisitions. Activity continued through 2015 and hit the annual high of 108 M&As. But, through the first seven months of the year through 08/4/16, we have seen only 39 cybersecurity companies merge or get acquired.

The number of IPOs since 2012 has consistently been at or under 5 — with 2012 and 2015 tied for the most IPOs. Last year there were 5 IPOs including those of Rapid7 and Mimecast, while just one venture-backed cybersecurity startup went public so far in 2016 — Quick Heal Technologies mentioned above.

In total, 19 cybersecurity startups have gone public in the last four and half years, and nearly 400 have been the targets of M&A since 2012. 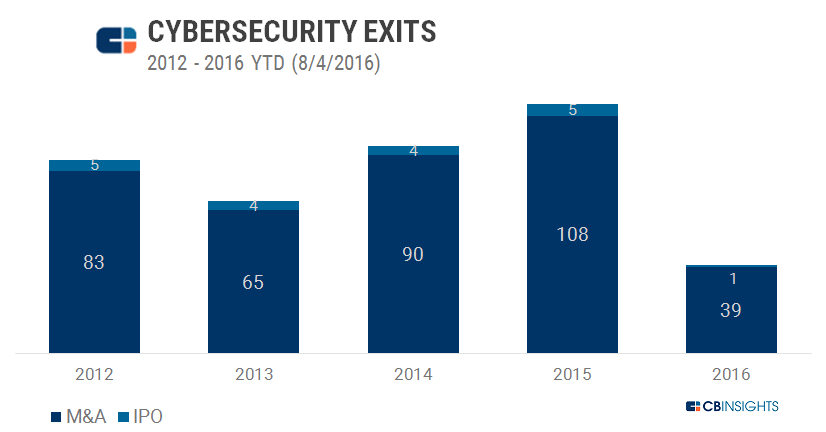 Most well-funded companies before exit

Based on disclosed funding, AVG Technologies — a provider of security and antivirus software for personal computers — was the most well-funded cybersecurity company prior to exiting (through an IPO in February 2012), and this year AVG was acquired by AVAST Software.

AirWatch — acquired by VMware in February 2014 — took second. Rounding out the top five spots are MobileIron, Perimeter eSecurity, and Rapid7.

Only two companies on the list exited at a valuation of over $2B — with Palo Alto Networks leading the way with their $2.8B valuation at the time of their IPO in July 2012. FireEye took second at $2.3B with an IPO in September 2013, and AirWatch came in third.

The company MANDIANT, which came in fourth, was itself acquired by FireEye in December 2013. Barracuda Networks came in fifth.