Our timeline visualizes cybersecurity company exits valued at $1B+ at acquisition or IPO, from CrowdStrike's $6.7B public offering to Cisco's massive purchase of Duo Security last year.

As data breaches and hacks become more common and companies look to shore up their data privacy, cybersecurity startups are becoming increasingly attractive targets for investors.

Cybersecurity startups have raised a record $8.8B in disclosed equity funding this year (as of 10/8/19), already surpassing the $8.6B high for full year totals in 2017. Deal count this year is also expected to surpass 2018 highs, with more than 580 rounds so far.

Since 2010, 23 cybersecurity companies have exited via an IPO or M&A deal valued at $1B+, 10 of which have happened since the beginning of 2018. Using CB Insights data, we visualized these exits together in one timeline. 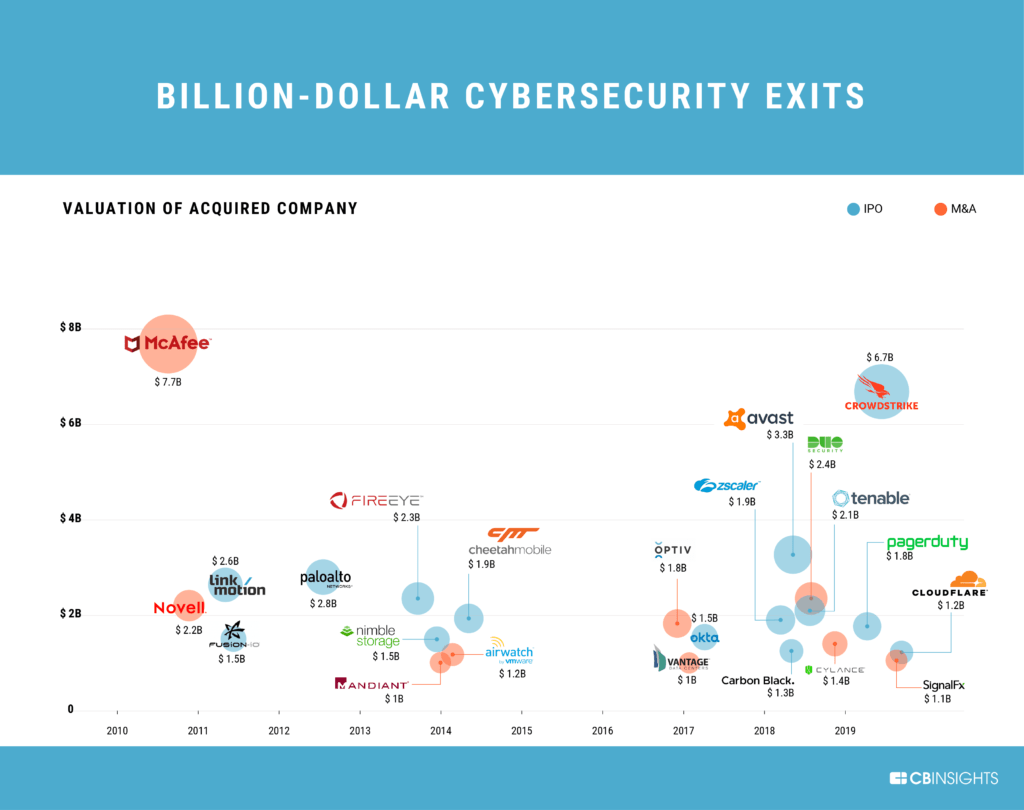 The highest-valued exit on the list goes to McAfee, a security and antivirus corporation, which was acquired by Intel for $7.7B in 2010. The company was later acquired by private equity group TPG Capital in a downround valuing the company at as much as $6.1B.

The largest cybersecurity IPO went to CrowdStrike, an AI-powered endpoint security platform that protects corporate networks at vulnerable areas of connection, like laptops and phones. The company went public in June 2019 at a $6.7B valuation.

The most recent billion-dollar cybersecurity exit went to monitoring startup CloudFlare, which went public in September 2019 at a $1.2B valuation, though lower than its previous $1.8B valuation from a 2015 Series D round.

8 companies reached unicorn valuations prior to exiting, including Duo Security ($1.2B valuation before exit), FireEye ($1.1B), and CrowdStrike ($1B).