Research Brief
2552
Corporations' venture capital arms participated in a record number of deals in 2015, but their investment pace slowed to a 7-quarter low in Q4'15.

New corporate venture capital arms continue to flood into the venture ecosystem, with the number of active CVCs more than doubling since 2011. CVCs are cropping up outside of traditional sectors such as tech and healthcare. JetBlue, General Mills, and Campbell’s Soup Company have all recently established new venture arms to tap into private markets.

Using CB Insights data, we analyzed corporate venture financing trends in recent years. Funding rose through much of 2015, reflecting the stepped-up presence of corporates, but we also saw a sharp year-end drop-off in 2015, mirroring the sentiment shift in the VC space as a whole.

2015 saw corporate VC investors participate in $28.4B of funding across 1301 deals, topping 2014’s previous records of $16.7B in 1245 deals. Q3’15 saw a quarterly record, both in terms of deals and the dollars tied to rounds with CVC participation. CVCs dove into mega-rounds such as Didi Kuaidi’s $2B Series F and SoFi’s $1B Series E.

However, as overall venture activity slowed in Q4’15, CVCs pulled back their investments as well, with deal activity slowing to a 7-quarter low. 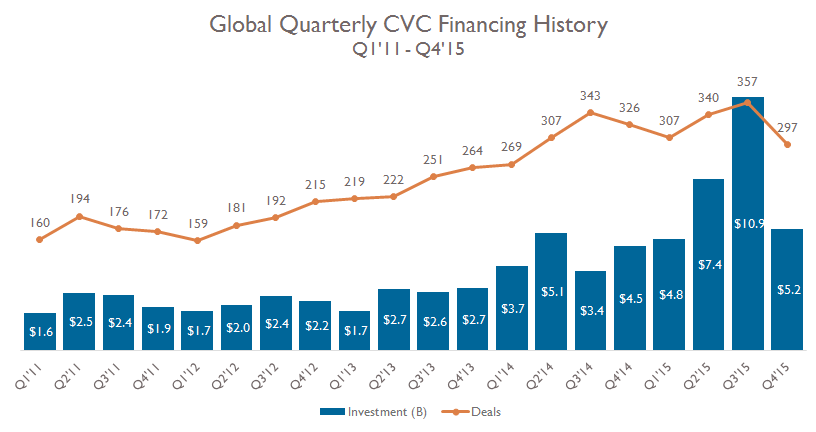 Besides dedicated corporate venture arms, we also dug into the financing activity of corporate parents themselves. We found that corporations have dramatically ramped up the pace of their private market investments in VC-backed startups.

Corporates themselves participated in $26.9B of funding across 668 deals in 2015 (edging out CVCs on a dollars basis but falling far behind on a deals basis). Chinese heavyweights like Baidu, Alibaba and Tencent have been leading the charge, participating in large rounds to notable US consumer startups such as Jet, Snapchat, Lyft, and Uber. 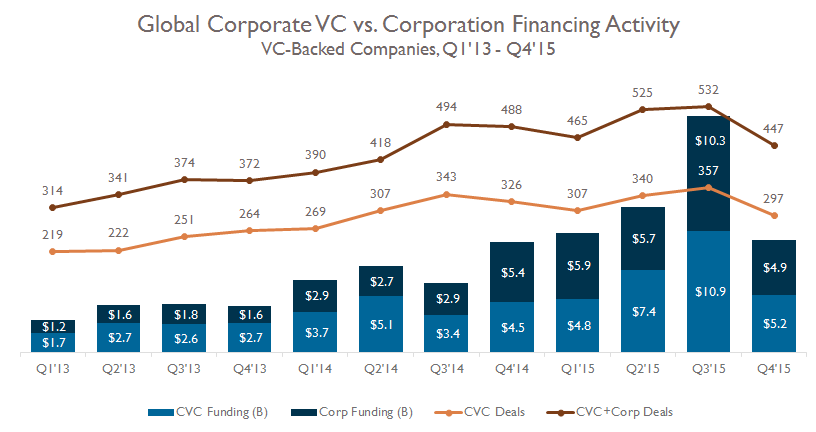 Want to better understand the corporate VC landscape? Check out our private market database below.