When crowdfunding first emerged as a popular model to raise money from groups of individuals, many pundits felt that crowdfunding would create a competitive threat to the venture capital model of financing startups.

Today, it’s apparent the crowdfunding phenomenon has indeed affected the VC ecosystem – as a complementary force. With thousands of consumer-oriented hardware campaigns looking for financing for everything from smart watches to beacon technologies, crowdfunding platforms such as Indiegogo and Kickstarter have provided VC investors with a valuable source for dealflow.

This report – the first of its kind – analyzes CB Insights financing and crowdfunding data to identify trends among crowdfunded hardware companies that began on Kickstarter or Indiegogo.

This report analyzes 443 hardware projects that have raised over $100K on Kickstarter or Indiegogo. Using this data, we examined how many of these 443 companies have raised outside venture capital equity financing and other associated trends.

A summary of the data & trends follows.

Venture funding to crowdfunded hardware startups went mainstream in 2013, reaching over $200M across 23 deals. The bulk of activity came in Q4 2013 when 10 startups including Scanadu, Formlabs and Misfit Wearables raised over $150M in aggregate funding. The largest round of 2013 went to virtual reality company Oculus VR, which raised a $75M Series B in December from investors including Andreessen Horowitz, Formation 8, Spark Capital and Matrix Partners. Only a couple months later in March 2014, Facebook announced the acquisition of Oculus for $2 billion marking the largest windfall to-date for a crowdfunded project.

In 2014, investor deal activity to crowdfunded hardware companies is on pace to break 2013’s record with 19 deals already in the first seven months of the year. If the current run-rate continues through the end of the year, 2014 will see over 30 deals.

Among the largest 2014 VC deals to crowdfunded hardware projects are smart bulb startup Lifx, which raised a $12M Series A led by Sequoia Capital after previously raising $1.3M on Kickstarter and a $10M Series A led by Khosla Ventures to home security product Canary. Canary previously raised just under $2M in one of the most successful hardware campaigns on Indiegogo to date. 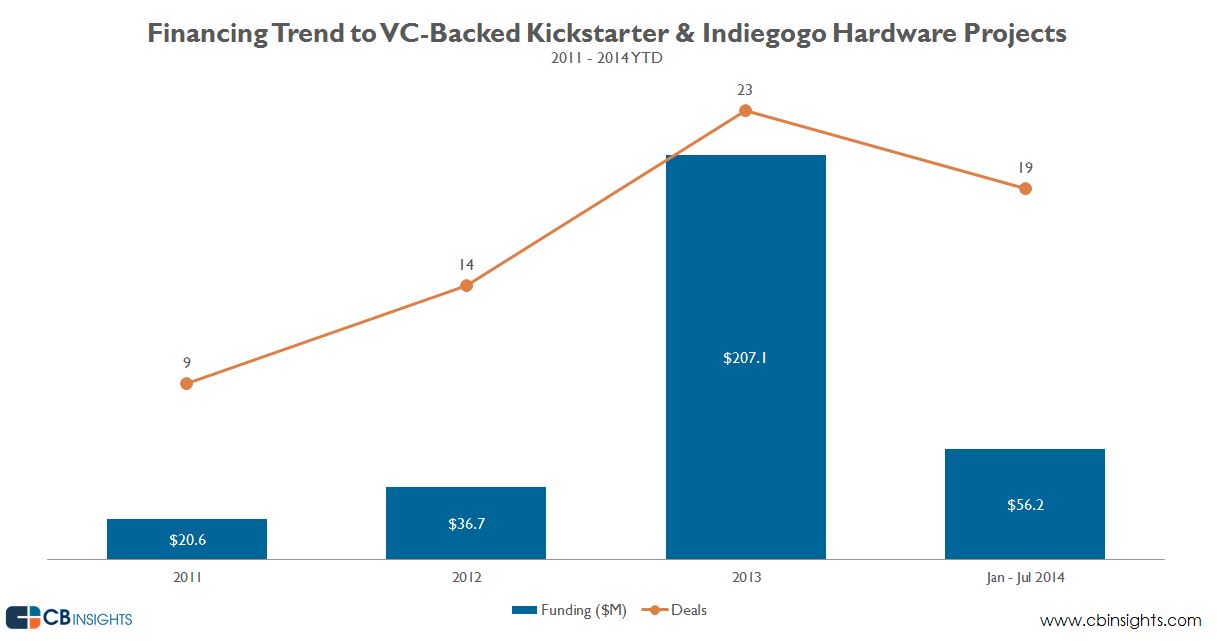 Both Kickstarter and Indiegogo are themselves venture capital-backed. While Indiegogo has raised over $56M from VCs including Kleiner Perkins Caufield & Byers, Institutional Venture Partners & Khosla Ventures, Kickstarter has disclosed just $10M in funding from investors including Union Square Ventures.

But of the 443 hardware campaigns analyzed that had raised over $100K, Kickstarter projects clearly dominated as the platform of choice. Of note, 82% of the crowdfunded hardware projects on the list were Kickstarter-backed. 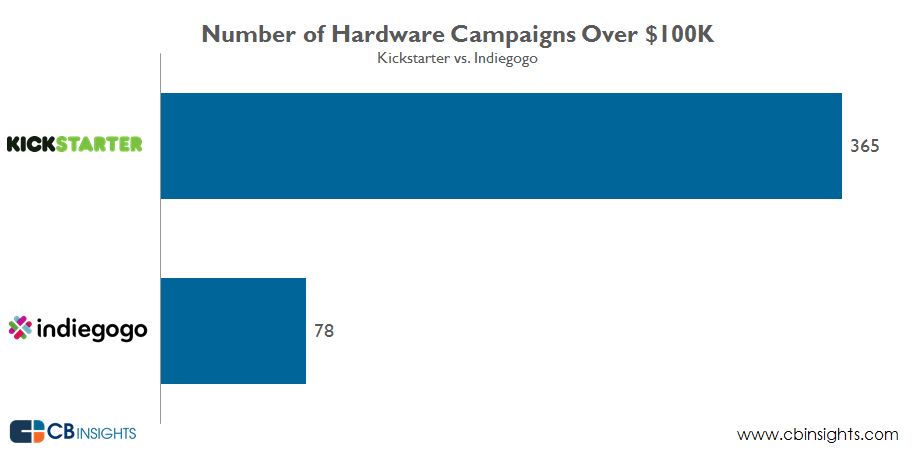 Given the disparity of hardware campaigns able to raise to $100K by platform, it’s perhaps not surprising to see the number of investor-backed companies trend in a similar fashion. Of the 42 venture-backed hardware companies, 35 originated from Kickstarter while 7 were from Indiegogo.

When we look at the number of hardware campaigns that were able to obtain outside funding out of the total number of projects over $100K by platform, the data shows similar percentages of investor-backed companies – though Kickstarter still comes out on top.

The chart below highlights overall funding raised by hardware companies on the respective platforms. Of note, Kickstarter-backed hardware projects have raised over $268M to date, besting the $52M invested in Indiegogo projects by 416%. On average, both Kickstarter and Indiegogo-backed companies with VC funding have both raised nearly $9M. 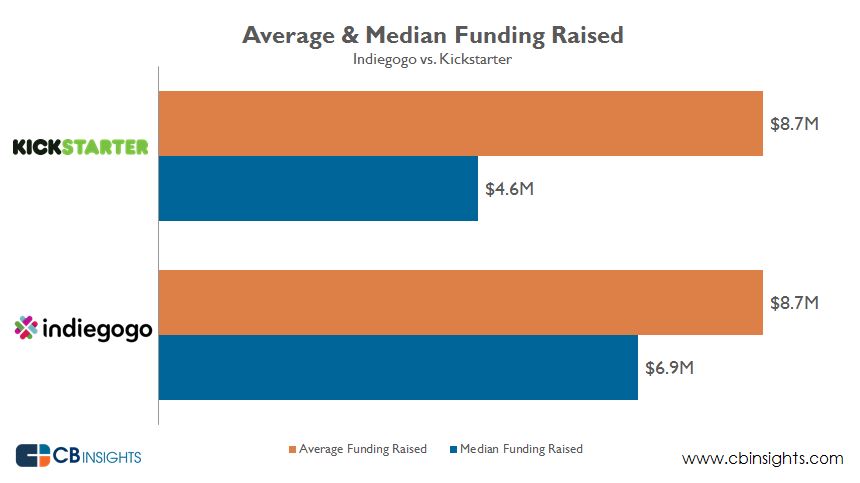 The most well-funded crowdfunded hardware startups

The disparity in outside funding to Kickstarter vs. Indiegogo hardware campaigns is largely due to a small number of companies that have raised sizable financing rounds to date. In fact, of the top 10 hardware startups that have raised the highest amount of outside capital – 7 were Kickstarter projects (Misfit, Scanadu and Canary were Indiegogo projects). Given it has already exited, Oculus VR, which raised $91M prior to its acquisition, was not included on the list. 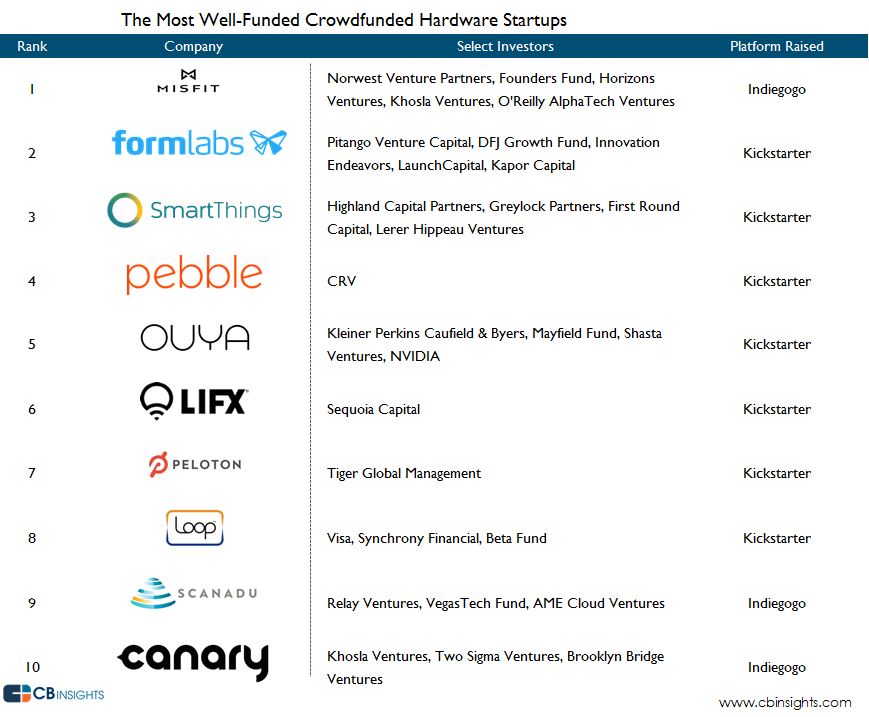 Just under 79% of the investor-backed crowdfunded hardware startups are based in the U.S. Among the U.S.-based companies, 52% are headquartered in California including Romotive, Pebble and LUMO BodyTech to name a few. Massachusetts and New York each saw three companies. Internationally, crowdfunded startups that have raised outside capital span a diverse range of markets including Australia (Ninja Blocks), Singapore (Pirate 3DP) and Sweden (Narrative). 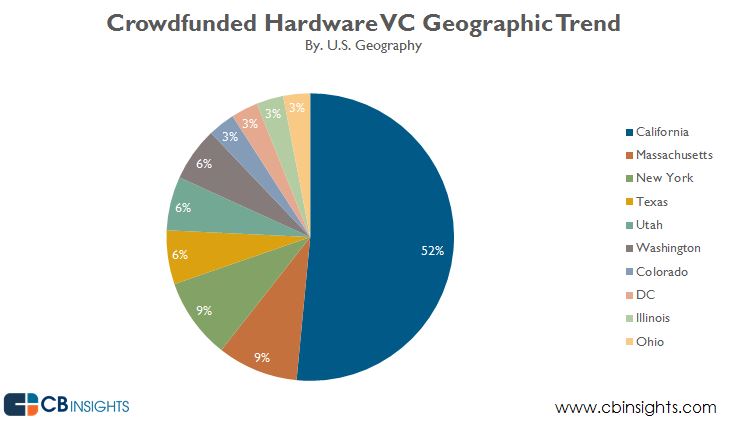 Do projects that raise more during their campaigns also raise more outside capital?

Lastly, we took a look at whether the hardware companies that were able to raise more funding via their Indiegogo or Kickstarter campaigns went on to raise larger sums of equity capital from venture capital investors.

And based on the data, there is no clear trend. While Oculus went on to raise $91M from VC investors after a $2.4M Kickstarter campaign, there have been others like smartwatch startup Pebble and video game console Ouya that raised over $8M from crowdfunding but have raised at or around the same amount of venture capital as some hardware firms that raised less than $2M during their campaigns.

Of course, given the nascency of the market, many of the hardware startups that fall into the lower left corner of the below chart may still go on to raise additional funding sums in the future. As crowdfunding only proliferates, we can expect that venture capital investors will expand their sourcing of deals from these platforms, and the amounts raised and number of deals will continue to climb. 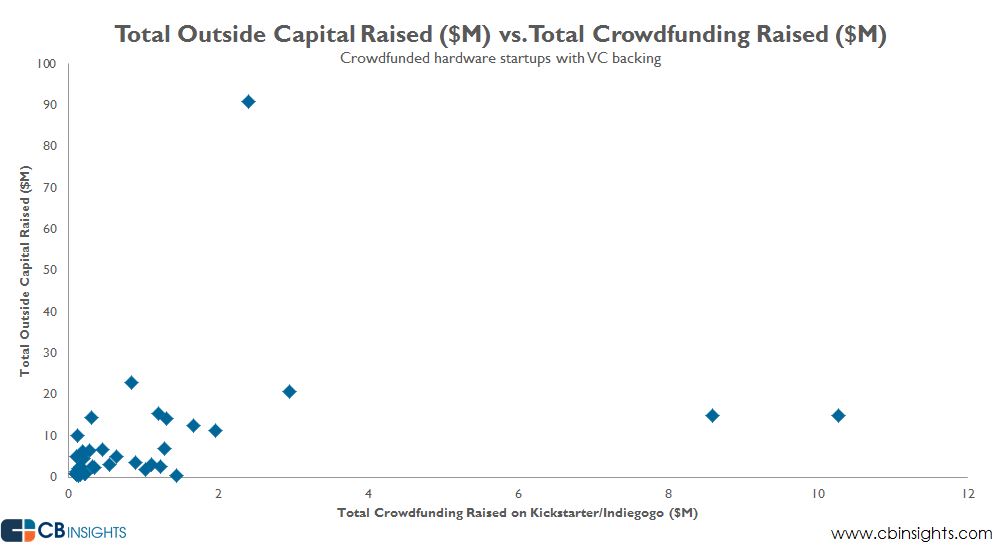 This report draws on some earlier research by Matthew Witheiler of Flybridge Capital Partners.
If you aren’t already a client, sign up for a free trial to learn more about our platform.