Research Brief
2244
This year has already seen 566 deals to private tech companies that include an investor traditionally focused on public markets. That already beats the annual total in 2014.

Public market investors are going upstream in tech, looking beyond public companies to invest in private market financing deals. We used CB Insights data to put some numbers to this trend, looking at what we consider “crossover investors,” a category that includes investment banks, mutual funds, and hedge funds, as well as asset managers, and diversified financial services-based firms, all of which customarily invest in the public markets.

Although Fidelity’s recent markdown of some of its tech investments has raised questions about whether the crossover trend will continue, 2015 has already seen 566 tech deals that have included a crossover investor through Q3’15, which is already a 9% increase over full-year 2014 with another quarter left in the year.

However, the big leap in deals and funding happened between 2013 and 2014, with many of the mega-deals in 2014 encompassing crossover investors. Rounds that included these investors jumped from 357 to 518 in a year, and the aggregate funding total of those rounds grew by 294% year-over-year.

Across all years, crossover investors were involved in 13 rounds where $1B+ was invested into a tech company, including multiple rounds into Uber, as well as the AirBnB and SoFi rounds earlier this year. Crossover investors have also been involved in early stage rounds, including Goldman Sachs investing in Kensho Technologies‘ Series A and Blackstone’s Series A investment into Phantom Cyber. 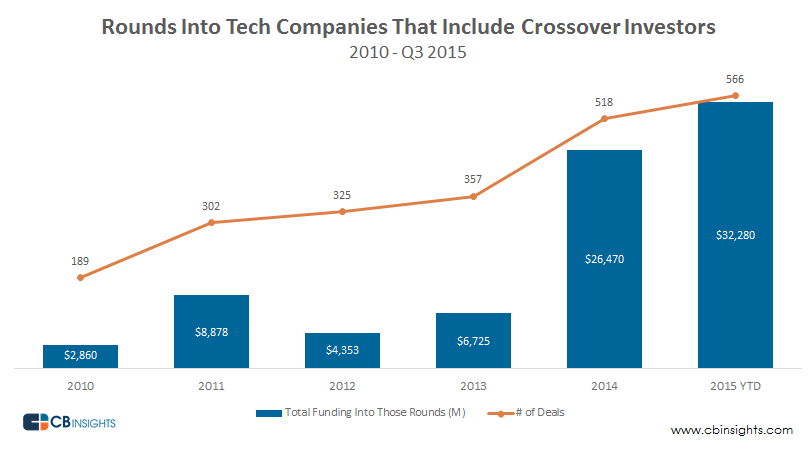 Since 2010, the most active non-traditional investor in tech companies is Tiger Global Management, which was the only investor with deals in more than 100 unique companies during this time period. Goldman Sachs was a close second, and has been more active in 2015 than Tiger Global. Rounding out the top 3 is diversified financial services firm Silicon Valley Bank.

Want more crossover investor data? Sign up for our venture capital database below.