The CPG industry saw a dramatic year in 2016, with Unilever’s $1B acquisition of Dollar Shave Club and Walmart’s $3B acquisition of Jet.com highlighting the success of new distribution models for traditional personal care products. Corporates also stepped up their presence in the space. Campbell Soup and Kellogg’s both launched VC arms in 2016 (Acre Venture Partners, and Eighteen94 Capital, respectively), while General Mills’ venture arm, 301 Inc., launched in 2015, escalated its activity with 5 CPG investments this year.

In keeping with the growth in new products, business models, and types of investors, VC-backed CPG startups (companies with at least one venture capital investor) attracted a record high in deals this year.

VC-backed CPG companies raised 167 investment rounds in 2016 worth $844M in total disclosed funding, compared to 145 deals worth over $1.1B in 2015. Helping drive this growth, we saw deals flow to startups offering all-natural food and beauty products, personalization, and direct-to-consumer distribution models.

Thrive Market, an online store for natural and organic CPG products, raised the year’s biggest deal with a $111M Series B in Q2, bringing total company funding to $151M. Juanpi.com, a China-based CPG e-commerce platform, followed with a $93M Series C, in the company’s first disclosed funding round. In third place was a $70M Series B to Juicero, which provides packets of pre-chopped fruits and vegetables on a subscription plan for at-home juicing, along with an accompanying smart cold-press juicer.

A bit further down the list, investors backed a number of animal-free meat and dairy substitutes. Fundings include a $30M Series B to plant-based milk startup Ripple Foods, a $23M Series F to plant-based meat startup Beyond Meat, and an $18M Series A to nut-based dairy startup Kite Hill. 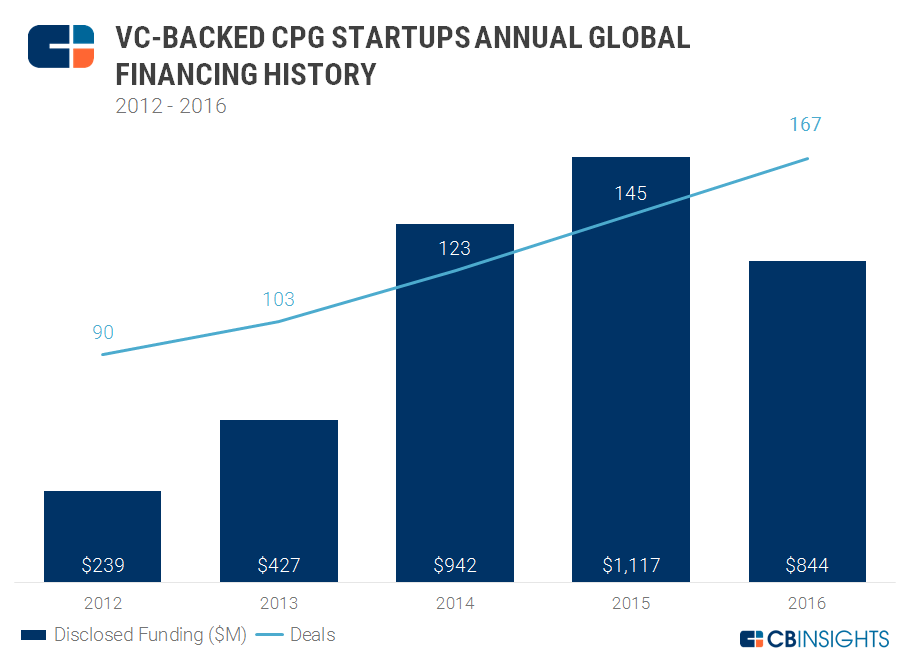 Deal count peaked in Q1’16 with 59 deals, the first time quarterly deal count has exceeded 50 deals. That quarter, food-focused CAVU Ventures made its first three investments (into World Waters, Good Culture, and Health-Ade Kombucha) and General Mills’ venture arm 301 Inc. expanded its presence with three deals (to Rhythm Superfoods, Good Culture, and Tio Gazpacho). These investments all focused on healthy eating options and on leveraging new ingredients, such as Rhythm Superfoods’ kale and beet chips, and World Waters’ use of discarded watermelons.

Startups working on cosmetics, food & beverage, and more have the potential to upend the industry. Sign up for a free trial and look for CPG & Retail Innovation in the Collections tab.

In Q4’16, the most recent quarter, Korean beauty startup Memebox, one of the most well-funded companies in CPG , raised the largest round with a $60M Series C-II. Beyond Meat, which produces plant-based burgers and other meat substitutes and sells packaged frozen meals, ranked second with a $23M Series F, while yogurt brand Maple Hill Creamery placed third with a $15.5M Series A. No other startup raised more than $10M in disclosed funding in the quarter. 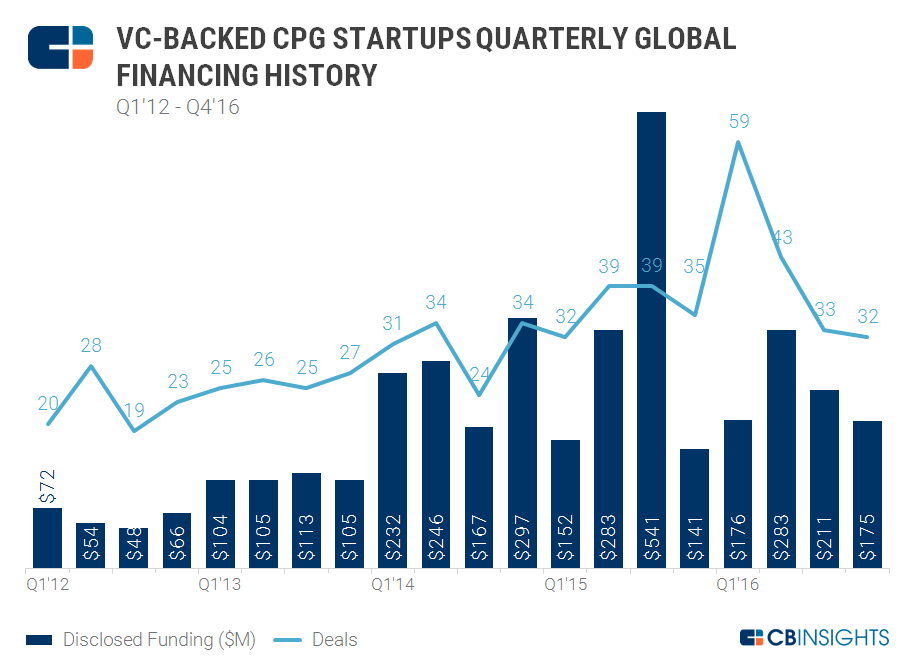 Want more data on consumer goods financing trends? Log in to CB Insights or sign up for free below.