Research Brief
3072
A big first quarter for private CPG companies means the category is still on track for a new annual high in deals, but Q2'16 saw significant declines in deals and funding dollars versus the previous quarter.

In the acquisition of one of the most well-funded private CPG companies, Unilever announced earlier this month it would acquire Dollar Shave Club for $1B.

That exit comes as private CPG companies are on track for a new annual high in funding deals, showing that the area is still hot with investors. Dollar Shave Club’s large exit may entice more to enter the fray or to further fund companies in CPG categories such as personal care, home care, and packaged foods.

Deals to CPG companies actually slipped in Q2’16 after hitting a record high in Q1’16, but despite the slight quarterly decline, deal count is still on track to reach an all-time annual high of nearly 450 deals in full-year 2016.

Annual dollars peaked in 2015, when Dollar Shave Club raised $90M in Series D financings and rival Harry’s Razor Company raised a $76M Series C. On a dollar basis at the current run-rate, 2016 would fall below 2014 funding totals to the category. But this category is often shaped by large deals to single companies, so the latter two quarters of this year could still alter that picture. 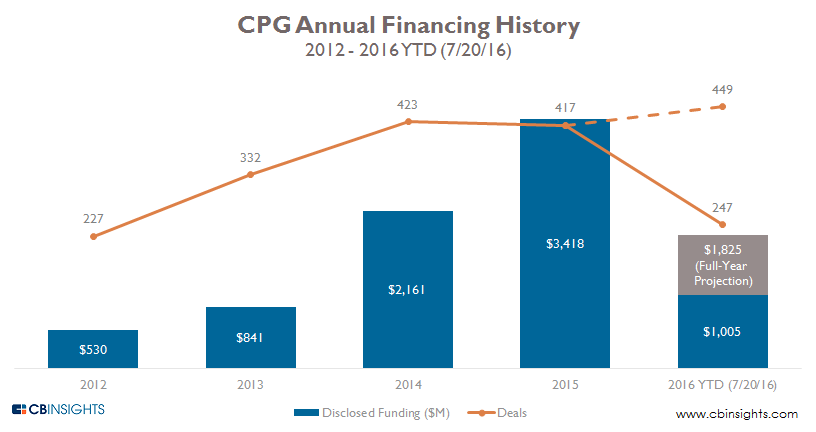 Deal count fell from a record high of 124 deals in Q1’16 to 101 in Q2’16, cutting short a three-quarter streak of gains. Dollar flow also tightened, as investors contributed just $404M to the sector, the lowest quarterly funding level since Q2’14.

Thrive Market, an online seller of natural and organic packaged food and home products, attracted the largest deal this quarter with a $111M Series B, boosting the company’s total funding to $151M. Chinese discount CPG e-commerce platform Juanpi.com followed with a $93M Series C, while Indian food and beverage producer Maiyas ranked third with a $30M Series A.

Dollars peaked in Q2’15 at over $1.2B based largely on the largest CPG funding deal to date — a $764M private equity round to Weetabix, a British cereal producer. 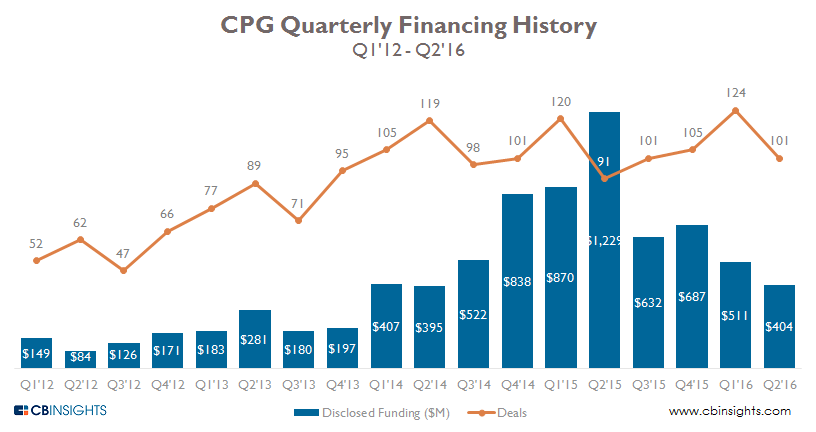