Research Brief
2500
Canada, Germany, and India were among the top-ranked markets for tech exit activity in 2015.

Tech exit activity was up in 2015, with 14% more exits in the year than the previous year, according to our 2015 Global Tech Exits Report. But how did those exits break down geographically? The US saw more than 1800 tech exits in 2015 leading all countries in IPO and M&A activity. European markets ranked high in exit activity as well with the United Kingdom, Germany, and France taking the number two, five, and six spots, respectively.

Using CB Insights data and analytics we highlight the top 52 markets globally by exit activity in 2015.

Outside the US and Canada (the number four market for tech exits), both European and Asian markets are well represented in 2015 tech exits.

Europe, for example, saw more than 800+ exits with notable companies like ShowroomPrive.com and Mimecast going public at valuations of $726M and $540M, respectively.

Asia had three countries in the top 10 including India and China. Representative exits in the region include corporate majority investments into Avito and Yongche which were both bought for $1B+.

Check out the top 52 countries ranked by the number exits below. 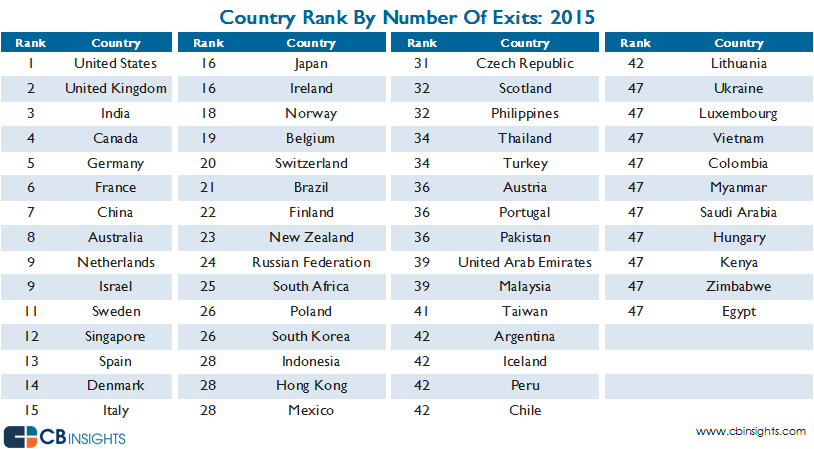